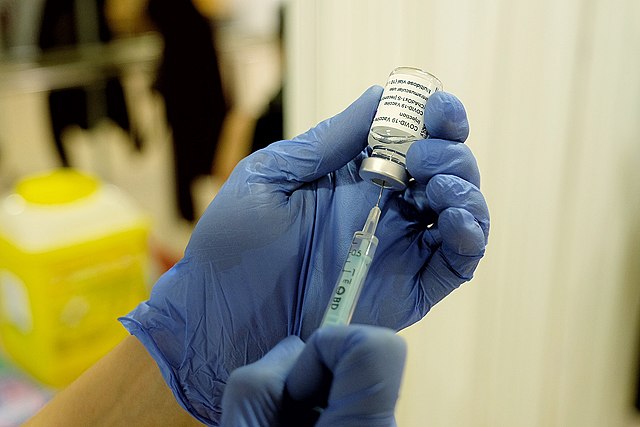 58-year-old Anthony Singler claims he has suffered an horrific side effect from his first AstraZeneca Covid jab and wishes he had never followed government advice.

Anthony now needs a wheelchair and walking frame to get around the house.

“I was asked to make a phone call to my loved ones as I was taken down to critical care as they didn’t know whether I would make it or not. I spoke to my wife and two daughters and said ‘goodbye’. That was frightening.” Anthony said.

“I was then on a ventilator for months recovering. Even though I was the one lying in a hospital bed paralysed, my family went through more than I did,” he added.

He confirmed: “I could only move my head. There was a buzzer to call the nurses and I had to headbutt it because I couldn’t use my hands. It messes with your head because your brain is telling you to get out of bed but your body can’t do that.”

“It’s really frustrating. When I was moved to Hayward I started physio. There was one stage where I lost it and broke down in tears. They kept me in a separate room all night.”

Anthony added: “Before this happened, I’d class myself as a mentally-strong person. Nothing could phase me but this was something else, it’s taken its toll on my mental health. I can’t go to work, drive or dress myself.”

“My hands are so bad that I can’t grip anything. I use a wheelchair and have a walking frame I have to lean on. I can’t stand on my own. I can only walk up to 20 metres with a frame.”

“I wouldn’t wish it on my worst enemy, it’s really bad. I did not like any of it but I am lucky to be alive.”

Anthony said: “It’s life-changing but I didn’t do something that caused this. We just did what the government told is to do. I regret getting the vaccine.”

“If I had known there was a chance of getting this, I wouldn’t have gone anywhere near it. My nerves have been stripped and damaged. This is the beginning and it’s going to be a long haul.

“I won’t ever be the same Anthony again.”

‘Being pro-life does not simply mean opposing abortion’ Vatican says

Soaring costs of everything from car hire to energy and food...

Glastonbury Festival 2022: Where to watch Glastonbury on TV and full...