Before the UN, Zelensky calls for a “just punishment” against Russia 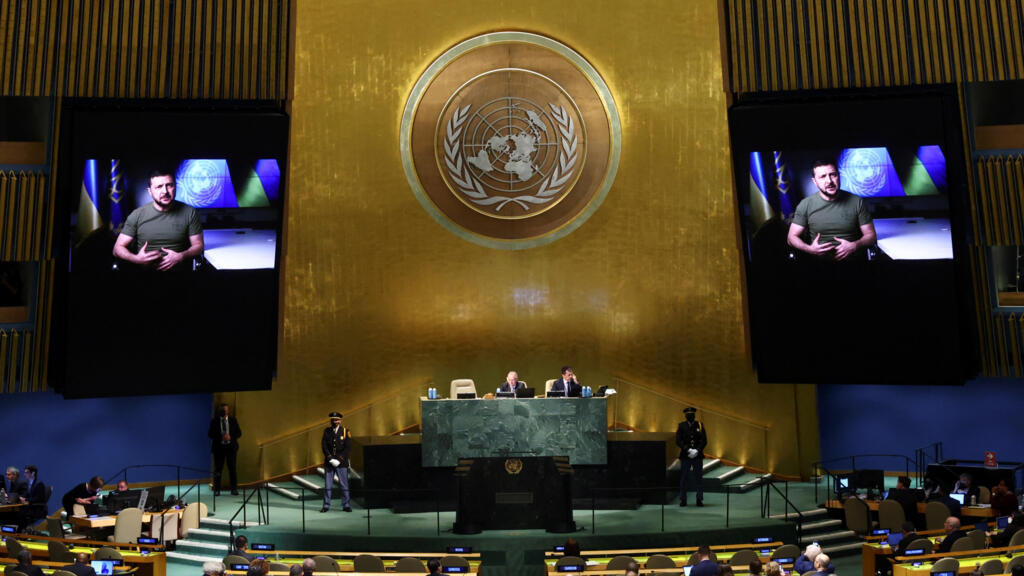 In a video message, the President of Ukraine addressed the second day of the UN General Assembly on Wednesday, September 21. In particular, he called for a “just punishment” for the crimes committed by Russia, the establishment of a special tribunal and the suspension of Russia’s right of veto at the UN.

” A crime has been committed against Ukraine and we demand just punishment “, declared the Ukrainian president Volodymyr Zelensky before the Heads of State and Government of the UN. For about twenty minutes, he presented his “ formula for peace five non-negotiable conditions for ending the war.

These include the punishment of crimes of aggression, the protection of life, the restoration of security and territorial integrity, security guarantees and Ukraine’s determination to continue to defend itself. The neutrality ” is not in our formula the Ukrainian president told countries that have taken neutral stances on the war, saying they are hampering peace attempts.

On the other hand, the Ukrainian President demanded before the UN a special court to judge russia ” for his crime of aggression ” and ” violation of borders and territorial integrity “. This sentence ” must remain in place until internationally recognized borders are re-established he asked.

He also called on the General Assembly to set up a compensation fund for Ukraine and to suspend Russia’s right of veto in the UN Security Council. ” The aggressor participates in decision-making in international organizations, he must be isolated from them “, he said.

Dressed in his traditional khaki T-shirt, the Ukrainian head of state therefore reminded world leaders of the importance of maintaining pressure on Russia and delivering new weapons to Ukraine. ” Russia will be forced to end this war “, he asserted during his speech which ended under the ovations of the room.