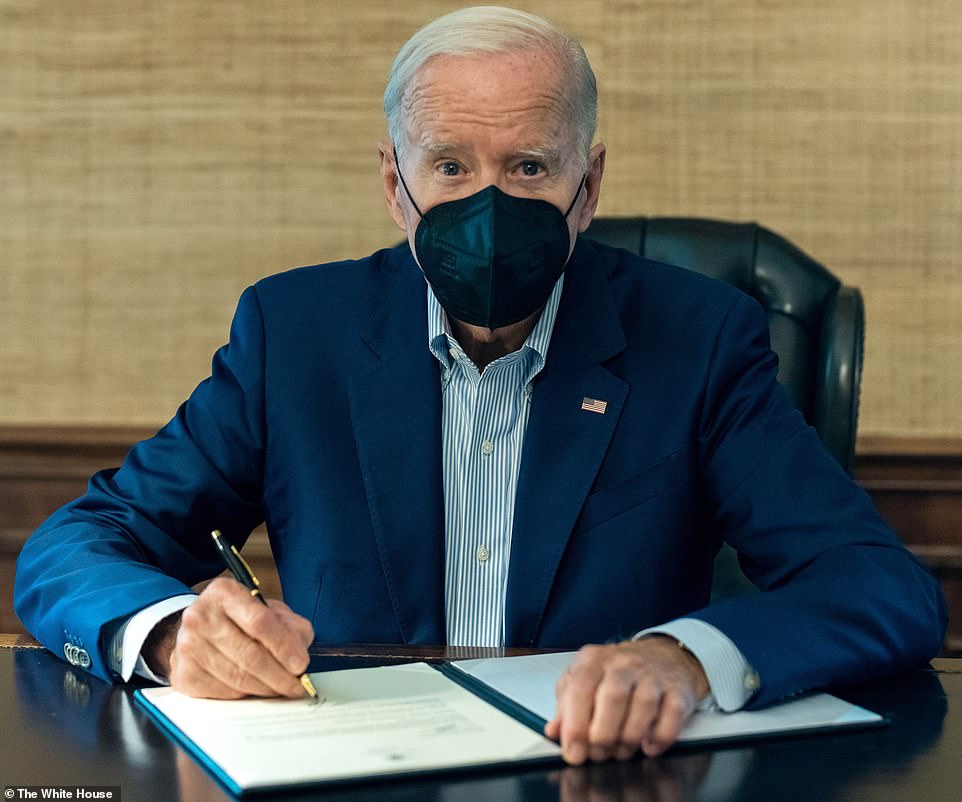 President Joe Biden tested positive for COVID-19 on Saturday, sending him back into isolation just days after he was cleared to resume his duties.

In a memo, Biden’s physician, Dr. Kevin O’Connor, said the president is experiencing no new symptoms and ‘continues to feel quite well.’

O’Connor had warned of the possibility of a testing ‘rebound,’ which could occur on a small percentage of patients who, like Biden, used the antiviral medication Paxlovid as part of their treatment against COVID.

Following the president’s announcement, Dr. Jonathan Reiner, a prominent cardiologist and professor of medicine and surgery at George Washington University Hospital, tweeted: ‘I think this was predictable.’

The doctor continued: ‘The prior data suggesting ‘rebound’ Paxlovid positivity in the low single digits is outdates and with BA.5 is likely 20-40% or even higher.’

Some experts have said that the current treatment cycle of taking three pills twice a day for five days is too short a time period to clear Covid from the patient’s body.

On Saturday afternoon, Biden, 79, tweeted: ‘Folks, today I tested positive for COVID again. This happens with a small minority of folks.

‘I’ve got no symptoms but I am going to isolate for the safety of everyone around me.

‘I’m still at work, and will be back on the road soon.’

Later in the afternoon, he posted a 12-second video ‘quick update’ on his condition, delivered from the White House with his dog, Commander, sitting near him. And I’m feel fine, everything’s good. But Commander and I got a little work to do.

‘Hey folks, Joe Biden here,’ the President says in the video. ‘Tested positive this morning. Going to be working from home for the next couple days. And I’m feeling fine too, everything’s good. But Commander and I got a little work to do.’

The doctor maintained that the actual percentage of reinfections is ‘in the single digits.’

He added: ‘Paxlovid is working really well at preventing serious illness, rebound or no rebound, and that’s why he was offered it. And that’s why the president took it.’

Biden also tweeted an image of himself wearing a black mask, looking directly at the camera, while signing a declaration to ‘expedite support to flooding survivors’ in Kentucky.

At least 25 people have died — including four children — in the devastating floods unleashed by torrential rainfall that swept through homes, washed out roads and pushed rivers over their banks, authorities said.

‘I’m taking more action to help the families being displaced and lives lost due to the flooding in Kentucky. Today, I added Individual Assistance to the Major Disaster declaration I approved to expedite support to flooding survivors,’ the President tweeted.

‘Today, I added Individual Assistance to the Major Disaster declaration I approved to expedite support to flooding survivors.’

About an hour announcing he had tested positive for COVID again, President Joe Biden tweeted a post featuring an image of himself wearing a black mask while signing a declaration to ‘expedite support to flooding survivors’ in Kentucky 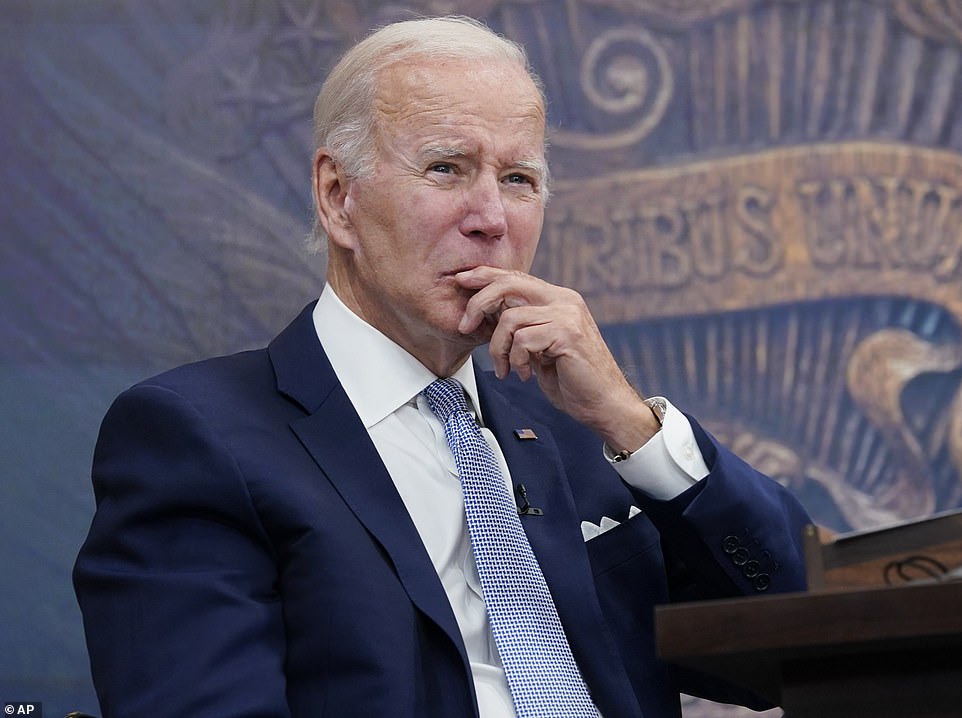 President Joe Biden has tested positive for COVID-19, sending him back into isolation just days after he was cleared. Pictured: Biden out of isolation on Thursday after testing negative for a third-day in a row 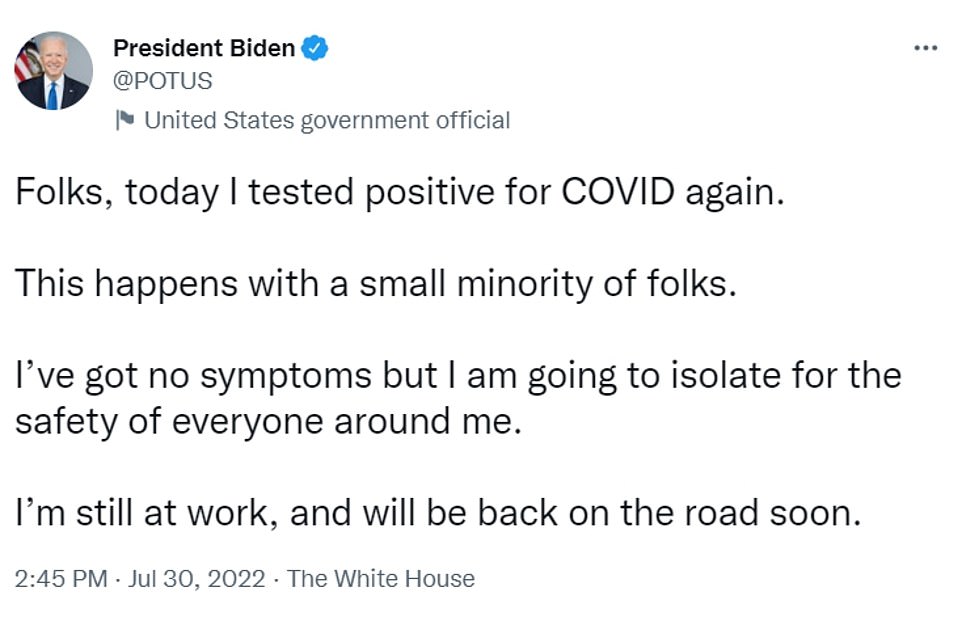 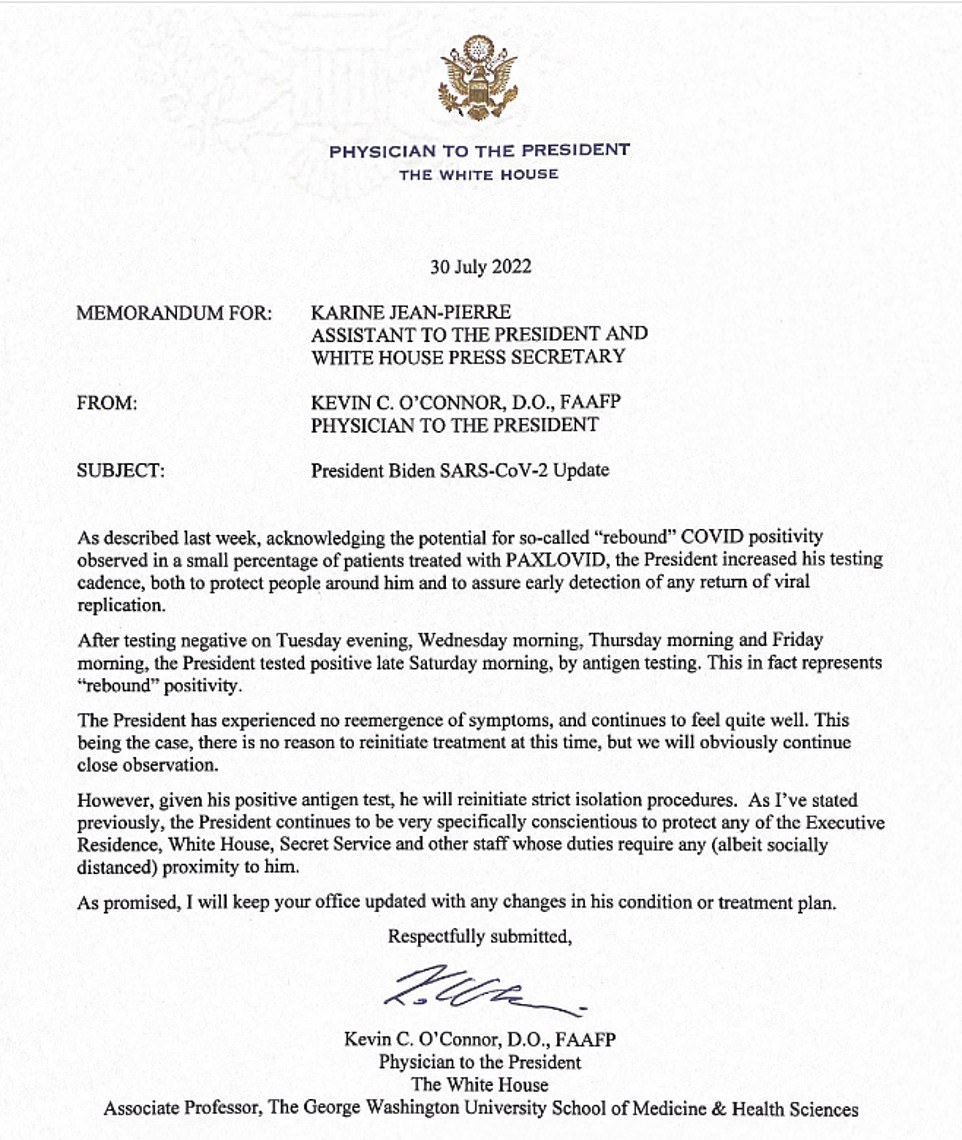 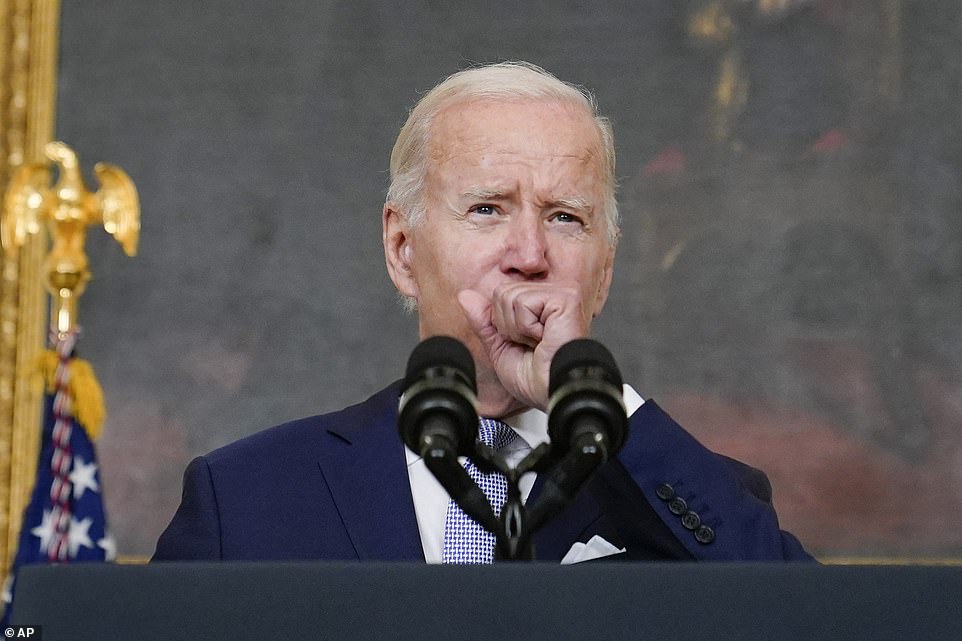 Biden has held several speeches after he was cleared for isolation. He’s pictured on Thursday touting his Inflation Reduction Act of 2022 as he coughed in the middle of his speech

Paxlovid is an oral antiviral treatment which works by blocking the ability of the COVID-19 virus to multiply in the body.

The medication must be prescribed by an authorized prescriber.

The Oral treatment should be administered as soon as possible after diagnosis of COVID-19 and within five days of symptoms to achieve the best result.

The capsules are taken twice a day for five days with the most common side effects including diarrhea, nausea, and dizziness.

Paxlovid is not safe to use with certain other medications, and should not be taken by people with severe kidney or liver disease.

An oral treatment is not intended as a substitute for vaccination against COVID-19, with vaccines considered the best protection against the virus.

The CDC issued a notice in May that some of those who received the drug saw their symptoms return after they finished treatment – even after feeling fully healed at some points.

‘A brief return of symptoms may be part of the natural history of SARS-CoV-2 (the virus that causes COVID-19) infection in some persons, independent of treatment with Paxlovid and regardless of vaccination status.’

Experts are unsure as to why this is occurring, or what could be causing a person that is seemingly fine to later start feeling sick again from the same infection.

Biden, who made his most recent public appearance on Thursday, had no scheduled events on Friday and was expected to travel home to his home in Wilmington, Delaware, on Sunday morning, where first lady Jill Biden has been staying.’

He was also scheduled to travel to Michigan to highlight the passage of a bill that supports domestic high-tech manufacturing, which he was touting during his isolation. Both trips have been canceled.

Biden had tested negative for COVID on Tuesday following five days of isolation, and he provided another negative test on Wednesday. He also tested negative on Thursday and Friday.

The White House said Biden was infected by the BA.5 variant, which is responsible for a fresh surge in cases around the world.

Testing negative for the first time since July 21, Biden held a series of events in support of a $52 billion bill to subsidize computer chip manufacturing and research to counter America’s Chinese rivals.

Biden has kept to working remotely as he recovered, holding virtual meetings with world leaders and news conferences with reporters, who sat at a distance.

The president used his initial recovery on Wednesday as a chance to tout not only the COVID vaccines and boosters, but also Paxlovid.

The drug is believed to be the most effective treatment against the virus, and has been a favorite of the White House in recent months – with Biden even making it available for free to all infected people.

Clinical trials showed it could reduce the likelihood of hospitalization or death from infection by 90 percent if taken within days of symptoms first appearing, though some fear the protection may not be long-lasting.

In May, the Centers for Disease Control and Prevention (CDC) warned that recipients of Pfizer‘s antiviral COVID pill may have their symptoms rebound after they complete a course of the drug.

The agency issued the notice after reports emerged in recent months that those who received the drug saw their symptoms return after they finished treatment – even after feeling fully healed at some points.

‘Paxlovid continues to be recommended for early-stage treatment of mild to moderate COVID-19 among persons at high risk for progression to severe disease,’ the CDC wrote in the notice.

‘A brief return of symptoms may be part of the natural history of SARS-CoV-2 (the virus that causes COVID-19) infection in some persons, independent of treatment with Paxlovid and regardless of vaccination status.’

Experts are not sure why this is occurring, or what could be causing a person that is seemingly fine to later start feeling sick again from the same infection.

Although the president is reported to be experiencing any new symptoms on Saturday, his age leaves him at a higher risk of getting severely ill from the coronavirus.

According to the CDC, those 65 and up make up more than 81 percent of deaths from the virus, which has killed more than 1 million people in the US alone. 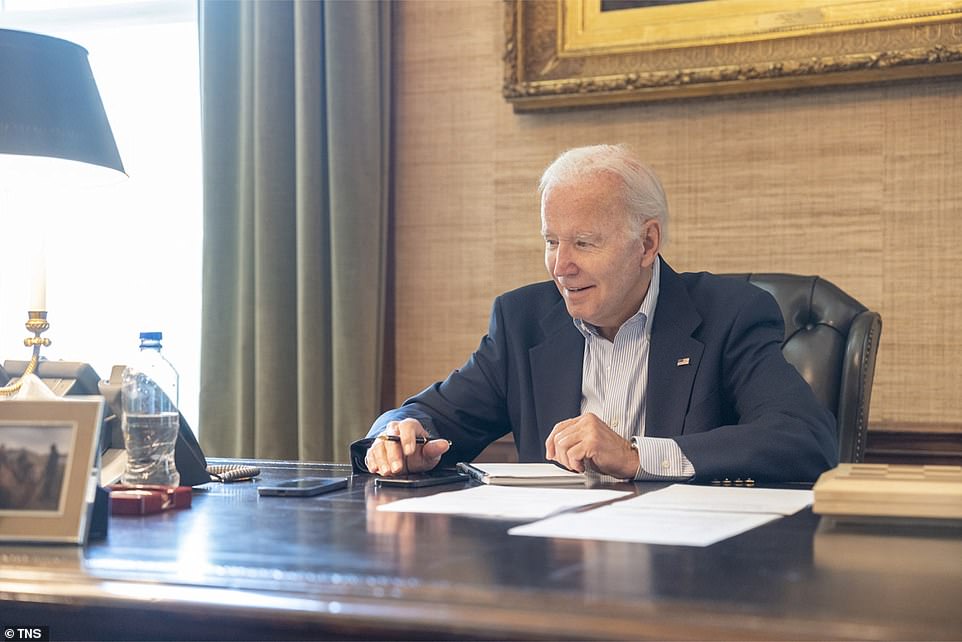 Biden will be back in isolation until he tests negative again. Pictured: Biden working during his stay in isolation last week after he tested positive for COVID 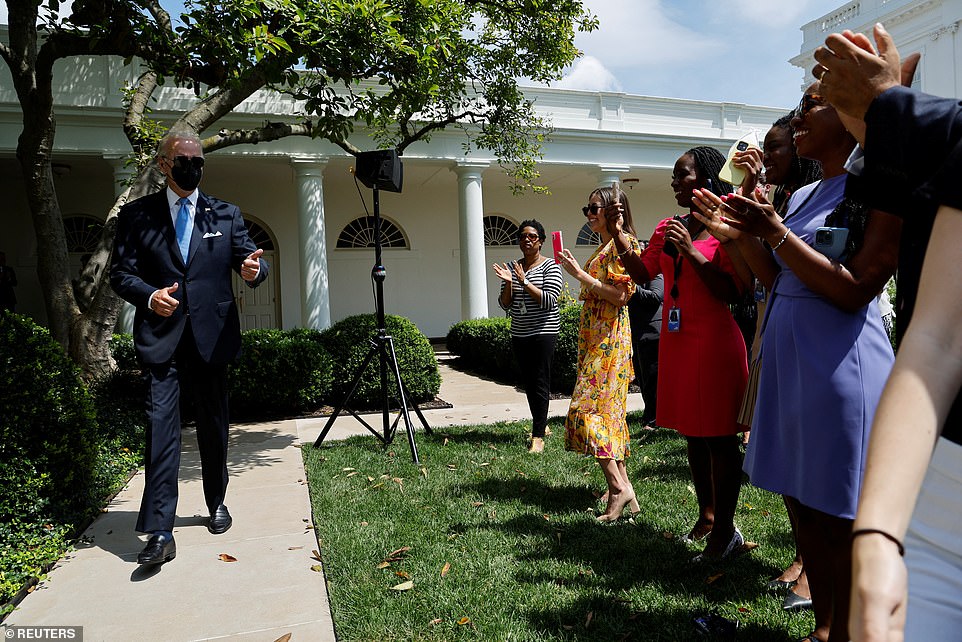 Biden showed his enthusiasm to leave confinement on Wednesday morning.

He tweeted a photo of his negative test, writing: ‘Back to the Oval. Thanks to Doc for the good care, and to all of you for your support.’

The White House has said Biden will follow CDC protocols when he returns to work, including wearing a face mask.

‘He will wear a well-fitting mask for 10 full days any time he is around others,’ O’Connor said. Biden first tested positive on Thursday of last week.

He is the second president to test positive for the highly-infectious disease. Then-President Donald Trump tested positive for COVID in October 2020, before vaccines were available. He was later revealed to have been seriously ill. He had gone to Walter Reed Hospital for treatment. 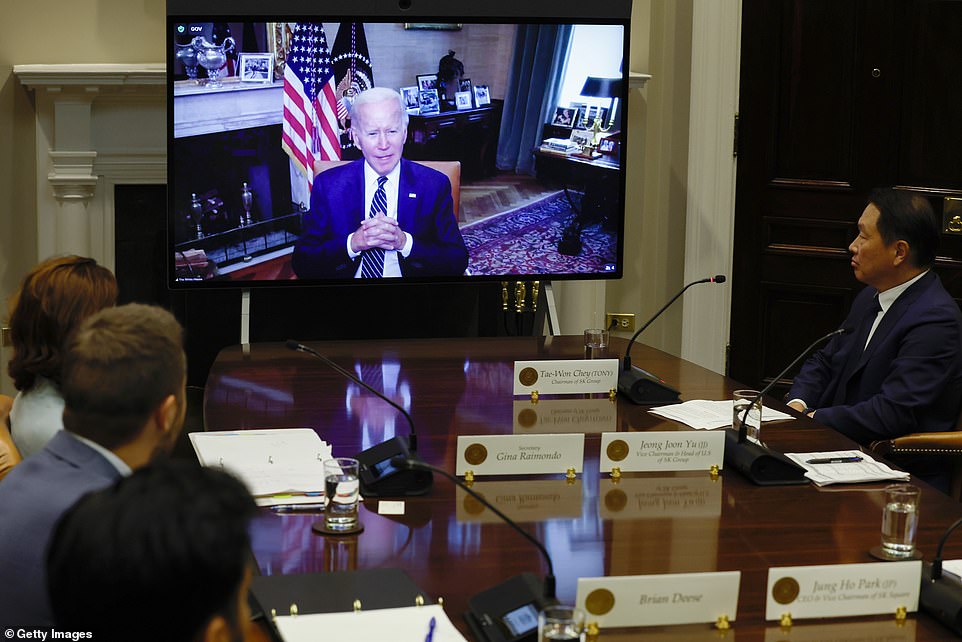 President Joe Biden on Tuesday indicated he’s getting restless in his COVID isolation, lamenting about being stuck in the residence 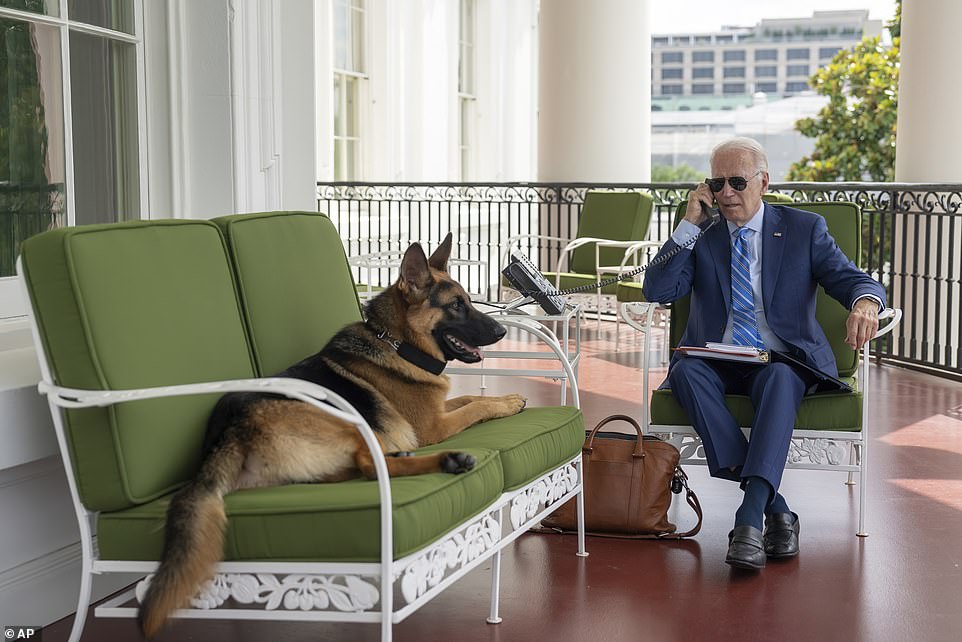 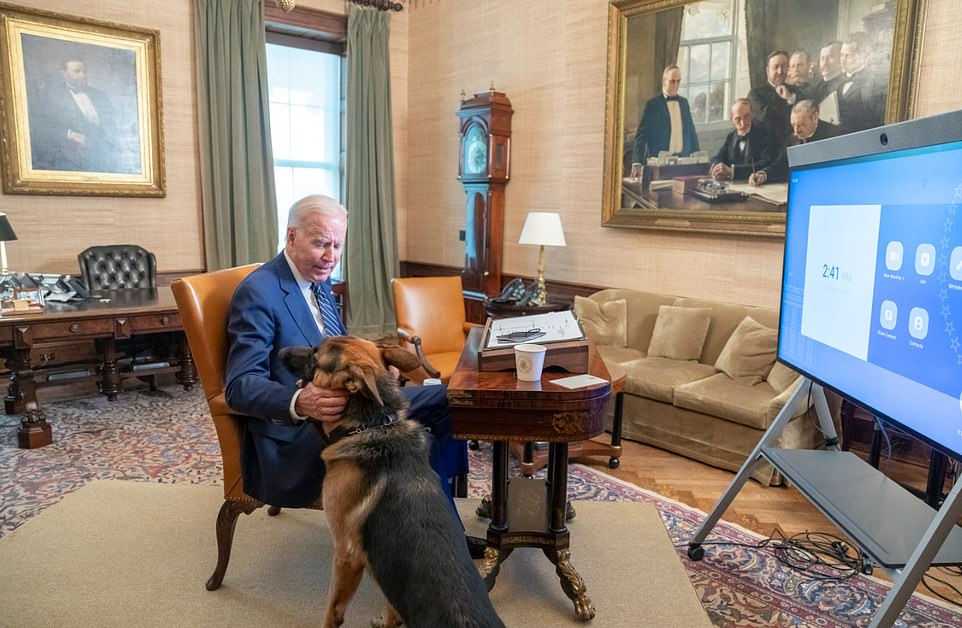 ‘Here’s the bottom line: When my predecessor got COVID, he had to get helicoptered to Walter Reed Medical Center,’ said Biden, 79.

‘He was severely ill. Thankfully he recovered.

‘I got COVID, I worked from upstairs of the White House …. for the five-day period. The difference is vaccinations of course.’

Biden was vaccinated and double-boosted when he finally caught COVID, having avoided it throughout the two-year pandemic.

Biden will stay in the residence area of the Executive Mansion until he tests negative again, where his primary companion has been his dog, Commander, as first lady Jill Biden decamped to their home in Wilmington – where she has been testing negative for COVID.

Whenever the subject is...
Read more

Whenever the subject is...
Read more
business

Sunday was the final day at the Saskatoon Ex and organizers say it’s been a great week. “It’s been a really great ex for us...
Read more
technology

‘House of the Dragon’ on HBO: Everything To Know Before Watching