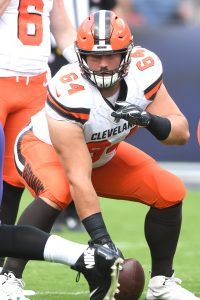 The Browns released center J.C. Tretter in March, and he has lingered on the free agent market ever since, with no concrete reports of interest in his services. However, even if Cleveland was able to re-sign its five-year starter to a team-friendly pact, Mary Kay Cabot of Cleveland.com does not envision such a reunion.

Per Cabot, the Browns would only consider re-signing Tretter if presumptive starter Nick Harris suffers a serious injury. Harris has started only two games in his two-year professional career, but the team is high on his ability and expects the transition from Tretter to Harris to be a smooth one. Indeed, while Tretter’s release saved Cleveland $8.2MM against the cap, the Browns — who currently boast a whopping $48MM+ of cap space — would not have made that move if they were not completely comfortable with Harris at the pivot.

Cabot speculates that teams that might otherwise be interested in Tretter, the NFLPA president, may have soured on him because of the hardline stance he has taken in negotiations with the league over the offseason program (among other things). Still, it is somewhat surprising that a player who has missed only one game since 2017 — a COVID-related absence in 2021 — and who has consistently rated as a high-end starter in the eyes of Pro Football Focus’ advanced metrics has not gotten any bites.

One wonders if Tretter, who is 31 and who has dealt with ankle and knee ailments over the past three seasons, is simply waiting for the right opportunity, or if he is contemplating walking away from the game. His $44MM+ of career earnings would certainly allow him to do that, although Cabot does believe he will eventually sign somewhere.

Echoing her earlier reports on the matter, Cabot says that the Browns are unlikely to add a veteran wideout unless David Bell‘s foot injury lingers. Bell, a third-round rookie, had an impressive spring and is currently penciled in alongside Amari Cooper and Donovan Peoples-Jones at the top of Cleveland’s WR depth chart. But he was recently put on the PUP list and is not expected back for another couple of weeks. If players like 2021 third-rounder Anthony Schwartz or sixth-round rookie Michael Woods II should fail to impress while Bell is sidelined, the Browns could look to the FA and/or trade markets.

One member of the team’s receiver mix, rookie Isaiah Weston, was carted off the practice field yesterday, as Tony Grossi of 85o ESPN Cleveland tweets. As a UDFA, Weston was a longshot to make the team anyway, and even if his injury is serious, it’s unlikely to alter the Browns’ decision-making too much.