BSTZ: Sell Now If You Want To Be Able To Sleep At Night 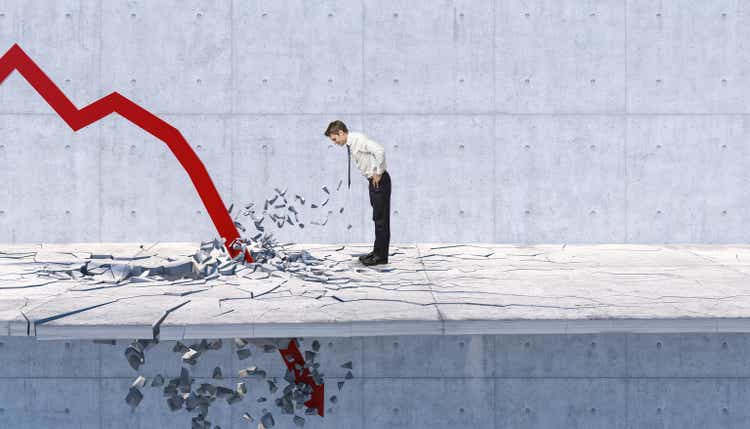 BlackRock Science and Technology Trust II (NYSE:BSTZ) is a closed end fund focused on software and semiconductor stocks with an emphasis on private investments. Through its composition, the fund focuses on more illiquid, harder to value assets that are subject to substantial gap-downs in prices as the market resets. With the IPO market grinding to a halt as we speak, expect harder price discovery here and substantial valuation mismatches when observability is obtained, as we saw with Klarna.

As good as 2021 was to BSTZ, as disastrous 2022 has been. With its total return now exceeding -46% year to date, BSTZ has another substantial leg down to go. In our section “How much lower can we go?” below, we anticipate another -15% to -20% leg down for this CEF. Capital and liquidity are exiting all speculative assets, with Treasury yields now at 4%. To put things in perspective, BSTZ has now managed only an annualized total return of a little bit over 5% since inception. You are not getting compensated for the risk and volatility here. BSTZ was a speculative play on technology during zero rates, and it should have been sold when inflation became unhinged.

We do not think the ingredients that helped push so much capital into the technology sector in the past years are there anymore (very low rates, TINA-effect, allure of the gamma squeeze trades). SPACs are closing, Bitcoin is taking it on the chin, and everything that was artificially inflated before is now deflating. Do not fight the Fed. The Fed wants capital out of speculative assets and tighter financial conditions. And the Fed will raise rates into a mild recession to see that happen. The main components of BSTZ, namely private software companies and semiconductor stocks have further to fall in order to achieve a true fair value in the context of higher rates. On the semiconductor stocks front, some market analysts are predicting another -25% down leg for the sector before bottoming out. Only time will tell where the bottom is, but markets tend to overshoot both on the upside and on the downside.

We have not seen a capitulation move in the stock market. We have not seen fear, a blow-up in VIX, and investors not being able to withstand the pressure of losses anymore. It is coming, however, just like in any other cycle. If you do not want to be the investor that sells at the bottom, then trim your BSTZ position now in order to be able to sleep at night.

How much lower can we go?

We are not done with the current bear market. Until inflation is tamed and rates top-out, expect continued pressure on stocks and especially on high-duration/highly speculative tech investments.

We believe the horrendous FedEx guidance from last week is just a flavor of things to come, with a market-wide earnings revision storm to follow. Where the bottom lies in the Index is as much dependent on the Earnings component as it is on the P/E de-rating:

We are of the opinion that we are moving towards the long-term average of 15x P/E ratio, with a -5% to -10% revision down in earnings. That should move the Index to the low 3000s levels. For speculative tech investments, that translates into another -15% to -20% leg down.

Where are rates going?

We are approaching 4% in treasury yields across the curve:

The market is currently pricing a 4.5% terminal rate in Fed Funds, while Goldman sees this in the 4.25% area:

We believe rates will rise further and are going to stay higher for longer. We feel the ingredients for a “v-shaped” recovery in tech are not there, with rates higher for longer and with the Fed’s Quantitative Tightening also taking a toll on financial conditions as it starts kicking into a higher gear this month.

The CEF’s performance this year has been nothing short of horrendous:

The fund is down more than -46% year to date, being “outperformed” on the downside only by Cathie Wood’s (ARKK), another speculative vehicle.

The CEF is now up only 16% since its inception in 2019, making its annualized performance nothing short of tragic:

The fund has now provided investors with a little bit over 5% annualized total return since inception. With risk-free rates now at 4%, to get only 5% via a high beta/high risk is nothing short of a very bad risk/reward proposition.

The fund is overweight extremely speculative sectors in the market:

We can see that the Software and Semiconductors subsectors account for over 65% of the fund. As we saw from Nvidia (NVDA), the guidance in the sector is weak, and the semiconductor space will be under pressure going forward. Market analysts are predicting significantly more pain for semiconductor stocks. Some market analysts are predicting another -25% down leg for the sector before bottoming out.

If we look at the fund’s top holdings, we will notice there are quite a few private names present:

These are highly speculative/high beta names that can overperform in a zero rates market like 2021 but will be very hard to exit in today’s environment. With IPOs virtually disappearing this year, the market is closed for these types of investments. Expect massive gap-downs in price/valuation when the market actually prices any of the private illiquid holdings.

BSTZ is a closed end fund focused on technology stocks. The CEF is overweight private software companies and semiconductor stocks. An expression of the excesses of zero rates, BSTZ has collapsed in 2022, down more than -46% year to date. With inflation still raging and the market debating whether the Fed raises rates by 75 bps or 100 bps, expect continued pressure on the most speculative pockets of the market. On the semiconductor front, for example, some market analysts are predicting another -25% down leg for the sector before bottoming out. We expect a continued de-rating in P/E ratios for the wider market in the context of Treasury rates above 4%. We expect another -15% to -20% move down in this name before all speculative capital is flushed out from the sector and valuations re-set to properly reflect higher rates for longer. If you do not want to be the investor that sells at the bottom, then trim your BSTZ position now in order to be able to sleep at night.

Share
Facebook
Twitter
Pinterest
WhatsApp
Previous articleHow the Bengals playing behind the sticks, and behind on the scoreboard, to start 2022 is behind their offensive woes
Next articleWoman says Memphis police failed to investigate her rape. The suspect is now charged in Eliza Fletcher’s murder.

The prospect of a recession in Cyprus is a distinct possibility According to the latest Eurobarometer by the European Commission seven out of ten Cypriots...
Read more
World

The prospect of a recession in Cyprus is a distinct possibility According to the latest Eurobarometer by the European Commission seven out of ten Cypriots...
Read more
World

Dear Amy: I am an atheist. I believe in practicing kindness and respect for other people’s views.In recent years, I have been working on...
Read more
Health