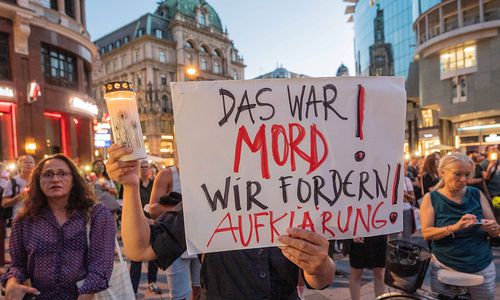 Data carriers have been secured from the man from Bavaria. A preliminary investigation is now underway against him for threatening and stalking Kellermayr.

In the case of doctor Lisa-Maria Kellermayr, who was threatened by opponents of corona vaccination and who died by suicide, the Munich public prosecutor’s office had the apartment of a suspect searched. This is reported by theZDF“. Among other things, data carriers were secured from the 59-year-old, which now have to be evaluated, the investigating authority said. The man from the Starnberg district was cooperative.

The public prosecutor’s office in Wels (Upper Austria) pointed out the suspect. A preliminary investigation is now underway against him for threatening and stalking Kellermayr. The search warrant was obtained during this process.

According to the Attorney General, the suspicion is based on statements made by the accused on social networks. One of his statements, which was also distributed on Twitter, was: “We are watching you and we will bring such creatures before the people’s tribunals to be set up in the future.” The authority did not want to disclose further details on the status of the investigation for the time being.

The Wels public prosecutor’s office resumed investigations into the authors of the death threats on social media in the Lisa-Maria Kellermayr case on Thursday. “Domestic jurisdiction” has been restored, the chief public prosecutor, Christian Hubmer, confirmed in a report in the “Upper Austrian News” on Friday. They are now working with the new German prosecuting authorities.

After the crime scene and the suspects are in Germany, the territorial jurisdiction was originally no longer given. Therefore, the investigations were assigned to Berlin and Munich. With the Suicide of the 36-year-old family doctor in Upper Austria The responsibilities have changed, which is why the Wels public prosecutor’s office has resumed investigations against suspects who are known by name since Thursday, Hubmer said.

Zerbes: The prerequisite for domestic proceedings has existed for some time

The Viennese criminal law professor Ingeborg Zerbes criticized the actions of the Upper Austrian law enforcement authorities. From her point of view, it was already evident with the suicide of the doctor last Friday that the Austrian judiciary was responsible for investigations into dangerous threats with suicidal consequences within the meaning of Section 107 Paragraph 3 of the Criminal Code.

Citing media reports, according to which Kellermayr has been massively threatened by a German suspect since last autumn, that should have been enough to initiate domestic proceedings for persistent prosecution under Section 107a of the Criminal Code: “By the woman sending his text messages that were suitable to impair them in their way of life in an unreasonable way in Austria, the necessary intermediate success – establishment of contact according to § 107a Abs 2 Z 2 StGB – has occurred.”

The fact that the suspect’s actions were likely to have a lasting impact on the doctor’s lifestyle “is obvious,” said Zerbes. As a result of the severity of the verbal attacks, it would not have taken a particularly long time to take criminal action against the man: “The more severe the pressure exerted on the person concerned, the less frequently and over a shorter period of time the perpetrator has to establish individual contacts have,” explained the criminal law professor.

The association Autonomous Austrian Women’s Shelters criticized that many women in Austria are “completely abandoned by the authorities, not taken seriously, rejected, misinformed or even yelled at when they want to file a police report. Too many reports are made by the public prosecutor’s office, dangerous Far too few perpetrators are taken into custody, the proceedings take a long time,” it says.

Authorities would actually be obliged to stop violence. Instead, the martyrdom of those affected would be “prolonged by constant, unbearable victim blaming and victim-perpetrator reversal that takes place on a daily basis”.

There are a number of support facilities and contact points for people in acute crisis situations. Under www.suicide-prevention.gv.at you will find emergency numbers and first aid for suicidal thoughts.

Telephone help is also available from:

Emmett Till, 14, was tortured to death on an August night in 1955 in a sweltering farm shed in Mississippi. His cries and moans...
Read more
Cyprus

Roquan Smith might be a fit for the Broncos

Filing this week’s mailbag from the press box high above where this season will end: State Farm Stadium in Glendale, Ariz. And you had...
Read more
Load more
Facebook
Instagram
LinkedIn
Pinterest
Tumblr
Twitter