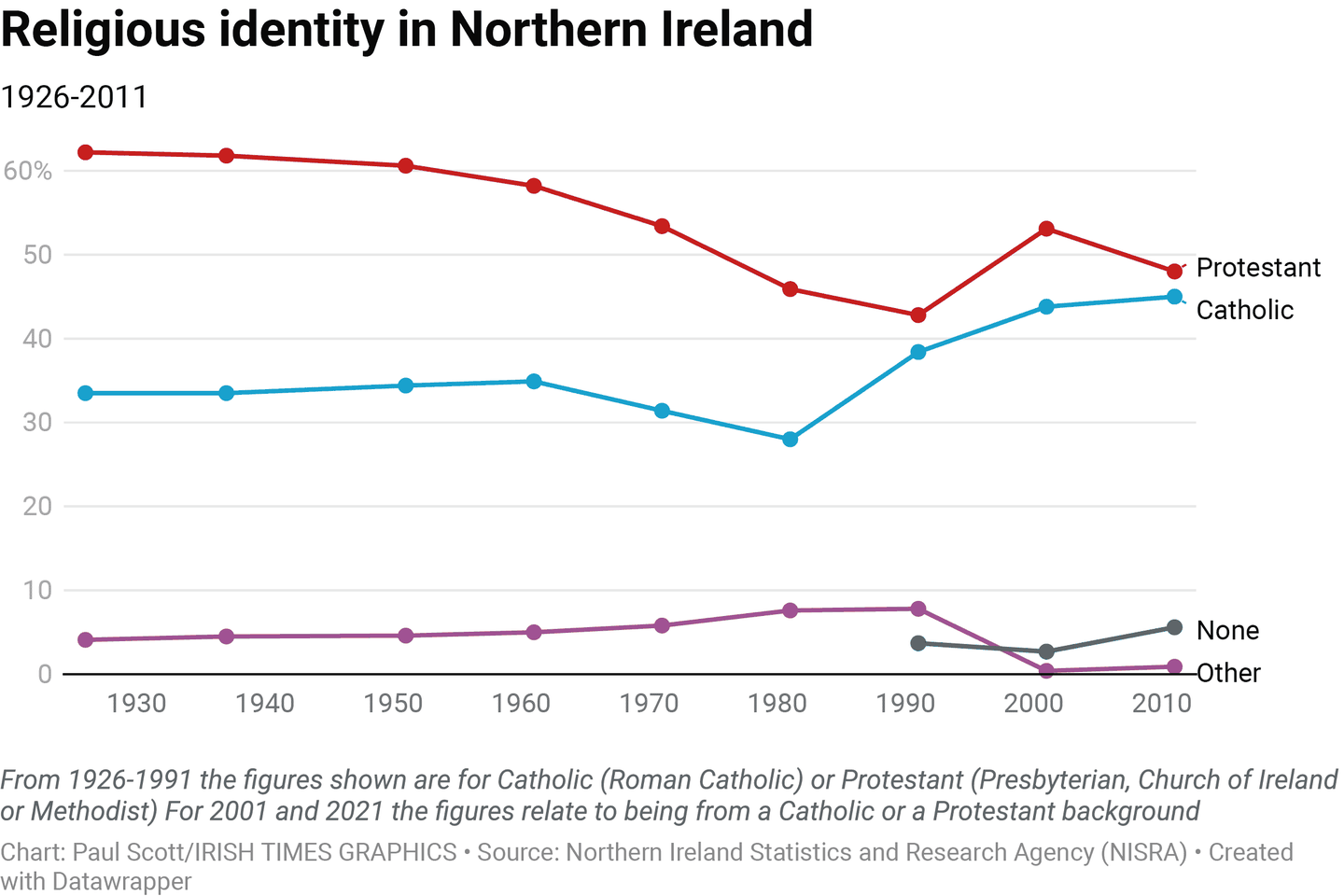 When the results of the Northern Ireland census are released on Thursday morning, they could show Catholics outnumber Protestants for the first time in the North’s history.

However, no religious grouping is expected to have a majority and the greatest growth may well be among those who do not define themselves as having any religion.

All of this will be significant, not least symbolically. Inevitably, much of the reaction and the commentary will focus on the traditional headcount of religious allegiance and what these changing numbers might mean for the debate around Irish unity or indeed, the chances of a Border poll.

It is, said Dr Paul Nolan, a Belfast-based expert in social trends and demography, what is known as the “rugby scores … all people want to know is: who won the match?”

“Of course, it’s more complicated than that, but in another way, it’s not, because this census was conducted 100 years after the Northern Ireland state was created, and it was created on a demographic headcount, so it’s not unreasonable for people to say: ‘Well how did that work out, 100 years on?’”

“We know that religion is becoming weaker as an identifier for people, we’re becoming a more secular society, and so it’s the national identity tables I’m going to be really interested in.”

Initial data from the census, which was carried out on March 21st, 2021, was released in May and showed Northern Ireland’s population had risen to 1.9 million.

Information on religion, national identity, ethnicity, language and passports will be published by the Northern Ireland Statistics and Research Agency (Nisra) on Thursday morning.

In the last census in 2011, those from a Protestant background dropped below 50 per cent for the first time; 48 per cent were Protestant, 45 per cent Catholic, 0.9 per cent of other religions and 5.6 per cent had no religion.

By comparison, the 2001 census showed a Protestant majority of 53 per cent, compared with 44 per cent from a Catholic background, 0.4 per cent other religions and 2.7 per cent no religion.

“The Rubicon which was the Protestant majority … that has already been crossed and was crossed some time ago,” said Prof Peter Shirlow, Director of Irish Studies at the University of Liverpool.

What the census could show, said Shirlow, is “demographic stalemate … neither population is really going to grow or fall dramatically, that’s where we’re going to be for a significant period of time.”

To “count heads” and to extrapolate from this the positions people might take on the constitutional question “doesn’t work”, he said. “People read demography as if it’s from 100 years ago [and] you needed a Protestant majority to make this place stay in the Union.

“People who will read this census and go back to that 100-year-old argument about breeding and outbreeding I think haven’t factored in how society is much more nuanced and complex … with people having hybrid identities.”

In the 2011 census, 40 per cent described themselves as British, 25 per cent as Irish and 21 per cent as Northern Irish.

Shirlow points to the 2021 Young Life and Times Survey from Queen’s University, Belfast and Ulster University as a reliable recent indicator of how people might vote in a Border poll.

In that survey, asked if they would vote “yes” in a unity referendum held tomorrow, 35 per cent said they would vote yes, 36 per cent would vote no and the remainder either didn’t know or wouldn’t vote — a far cry from the 50 per cent plus one which presumably would be required in that hypothetical poll.

“There are people who cherish their British identity who want to embrace the opportunities that a United Ireland can offer to all citizens, and there are Catholics who have always been content with the constitutional status quo,” said Niall Murphy, solicitor and secretary of civic pro-unification group Ireland’s Future.

“Demographic change, whilst significant, cannot be considered to be determinative,” he said. While the census figures are “important”, he pointed also to the “series of shifting tectonic plates in successive elections, which have seen the inbuilt unionist majority in the north evaporate forever”.

“The debate and momentum towards constitutional change is growing and developing regardless.”

“No one can extrapolate from any figures we see today [Thursday], or any other figures we see in an opinion poll, what people in those circumstances will do in a Border poll,” said unionist commentator Alex Kane.

Whatever the figures show, his assessment is that it will be “probably be overhyped from both sides”; for unionism’s part, he said, the real “hammer blow” was the loss of its overall majority in the 2017 Assembly election.

Political unionism, he said, “will take some comfort from people like me, the atheist camp like me, we’re growing, and they’re a harder bunch [to define] … you can’t assume that just because someone has no belief in God they’ll vote one way or the other”.

“They are the coming thing,” said Nolan of the “no religion” group. He pointed to May’s Assembly election result as a “fairly useful predictor if you want to get a sense of people’s national identities, and they broke down into the 40/40/20 ratio pretty cleanly, if you take it in terms of seats gained.

“What is definitely dead is the old paradigm of majority, minority … now the minority isn’t the minority any more, it’s just one of the minorities, but the architecture of the Good Friday [Belfast] Agreement can’t keep up with that.”

This chimes with the call made by, in particular, Alliance, which argues that the Assembly’s structures must be reformed to take full account of parties like it which do not designate as either unionist or nationalist.

“There is what I call the floating fifth, that roughly 20 per cent in our society, especially younger people, who are not really thinking about this [constitutional question] at all and so they’re there to be persuaded,” said Shirlow.

“When the last census came out, I wrote a piece that had the headline, ‘We are all minorities now’,” said Nolan. “I really suspect that’s how we’re all going to be for the long-term future.”

There won’t be any second-guessing the pitch selection. Only the location. Félix Bautista, who has been a stout closer for the Orioles this season,...
Read more