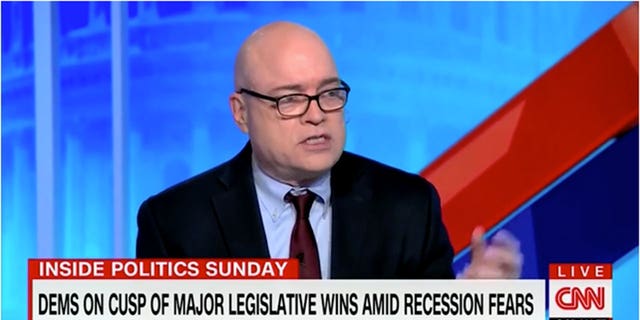 John Bresnahan, co-founder of Punchbowl News, suggested Sunday that the administration’s recent legislative victories, including the semiconductor chip bill and the deal reached by Sen. Joe Manchin, D-W.Va., and Sen. Chuck Schumer, D-N.Y., on Build Back Better, would not be enough for Democrats to succeed in the midterms.

During a discussion on CNN’s “Inside Politics,” Manu Raju asked Bresnahan about recent congressional victories and if it would be enough to “resonate” with voters as inflation remains high and the economy continues to be top concern for voters heading into the midterm elections.

He said it “clearly” would not be enough to resonate with voters and referred to CNN polling that was noted earlier in the segment, which found that 82% of voters believe the economy is in bad shape.

“You still drive down any main street in America, there’s lots of empty stores,” Bresnahan said. “The economy never really came back the way it has in the past since the pandemic.”

He said “downtowns are still empty,” adding that as voters look at their 401(K) account, it’s “no wonder Americans are scared.”

The New York Times’ Jonathan Martin argued that the congressional victories could help Biden in the midterms because the president’s approval numbers are below 40% “largely because he’s lost support from Democrats.”

“I think if Democrats are feeling better about Biden and he can show progress on an issue like climate, for example, I think that can get Biden’s approval back to 40 or even above 40. That doesn’t sound like much in the grand scheme of things, but that little improvement can help in the midterms because Biden’s got to be back to 40 for Dems to have any shot at holding the Senate,” Martin said.

Raju added that there was a “vibe shift” within the White House in light of these recent legislative victories for Democrats. He noted numerous headlines, such as one from Politico, which suggested the president was “back in the game” after the Schumer/Manchin deal.

Associated Press reporter Seung Min Kim said the White House was “cautiously optimistic” as the deal between Schumer and Manchin has not passed yet.

“I think this shows that yes, this is a good period in terms of legislative actions for the Biden White House but it also is a reminder about how so much of the earlier part of this presidency, the White House was a victim of its own sky-high expectations,” she said.

She added that no one had expected this Manchin/Schumer deal to work out and that the White House had set high expectations on a number of issues. She also said that Biden’s decision to not get involved in negotiations and stay out of it was successful.

“I think that’s a lesson that they’re going to take going forward,” she said.

U.S. President Joe Biden speaks during an event to celebrate passage of the “Safer Communities Act,” on the South Lawn at the White House in Washington, U.S., July 11, 2022.
(REUTERS/Kevin Lamarque/File Photo)

Manchin and Schumer agreed on a scaled back version of the Build Back Better bill on Wednesday, which they now refer to as the Inflation Reduction Act of 2022. The bill includes climate, prescription drug and tax provisions.

“I now propose and will vote for the Inflation Reduction Act of 2022. Rather than risking more inflation with trillions in new spending, this bill will cut the inflation taxes Americans are paying, lower the cost of health insurance and prescription drugs, and ensure our country invests in the energy security and climate change solutions,” Manchin said in a statement.

Hanna Panreck is an associate editor at Fox News.

-Hugo, today it was Javi Garcia’s turn to deal. Is it Rossi’s turn on Sunday? -We’re going to see it in the week, Xavi...
Read more
business

-Hugo, today it was Javi Garcia’s turn to deal. Is it Rossi’s turn on Sunday? -We’re going to see it in the week, Xavi...
Read more
business

These are the most impressive nature photographs of the year