Deshaun Watson suspension: How long is he suspended for? What are the allegations against NFL star? 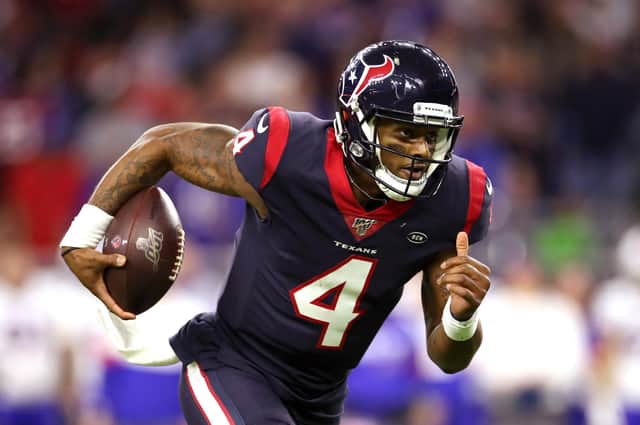 Deshaun Watson, 26, is an American football quarterback for the Cleveland Browns, formerly of the Houston Texans. On the field he is widely regarded as one of the brightest young stars in the game.

He was taken in the first round of the 2017 draft by the Texans after playing for college side Clemson, and quickly made a name for himself as a player to watch as he tore up defences across the NFL.

At the end of the 2020 season, frustrated by the team’s management, he demanded to be traded. The Texans refused, but a huge bidding war ensued from a large number of teams, but most offers quickly disappeared when allegations appeared about his behaviour soon after . . .

What are the allegations?

The claims resolve around alleged sexual misconduct by Watson.

Initial allegations came from several women, who worked as masseuses, saying that he had either touched them inappropriately or urged them to massage his groin area.

Eventually 24 civil lawsuits were filed, many with similar claims from women.

Some allege coercive behaviour, and there have been claims that women were pressured into performing oral sex.

Watson has so far settled with 20 out of the 24 women who have made claims against him.

How does Deshaun Watson respond to the allegations?

The player has consistently denied claims of inappropriate behaviour, but has said there had been consensual sexual relations with some of the women. He’s since begun to settle claims with many of them out of court.

The National Football League (NFL) has been investigating the claims since 2021, amid speculation that Watson would be given some kind of suspension after breaching the NFL’s personal conduct policy, possibly for a year or longer. Now that the full extent of the suspension has been made public, many feel it is not long enough.

Who does Deshaun Watson play for now?In March 2022, the Houston Texans traded Watson to the Cleveland Browns in exchange for three future first-round draft picks and two additional picks.

Despite the allegations, Watson is set to receive $230 million over five years from the deal. This is the most guaranteed money in league history.

The Cleveland Browns now face the prospect of having paid a hefty about of money and draft capital for a player who now won’t be able to take the field.

How long has Deshaun Watson been suspended for?He was given a six game suspension. A curious number for the gravity of the allegations, given that Atlanta Falcons Wide Receiver Calvin Ridley was earlier this year suspended indefinitely for betting on NFL games that he hadn’t been playing in.

So what happens next for Deshaun Watson and the Cleveland Browns?

Having sat out of the entire 2021 NFL season, Deshaun Watson will have to wait even longer. Though it seems it is not as long as many thought. It had been speculated that he would have to sit out an entire season.

Is there likely to be an appeal?

It’s difficult to say, but shortly before the length of suspension was announced, the NFL Players Association union, issued a joint statement with Watson saying they would respect the decision and not appeal, and urged the league to do the same.

“In advance of Judge Robinson’s decision, we wanted to reiterate the facts of this proceeding.

“First, we have fully cooperated with every NFL inquiry and provided the NFL with the most comprehensive set of information for any personal conduct policy investigation.

“A former Federal Judge – appointed jointly by the NFLPA and NFL – held a full and fair hearing, has read thousands of pages of investigative documents and reviewed arguments from both sides impartially.

“Every player, owner, business partner and stakeholder deserves to know that our process is legitimate and will not be tarnished based on the whims of the League office.

“This is why, regardless of her decision, Deshaun and the NFLPA will stand by her ruling and we call on the NFL to do the same.”

With inflation at a nearly 40-year high, Canadians are feeling the financial strain. In a six-part series this summer, The Canadian Press is speaking...
Read more
Netherlands

PARMA, Ohio -- A cost-savings reminder is what the city of Parma has been telling residents of late regarding Northeast Ohio Public Energy Council’s...
Read more

With inflation at a nearly 40-year high, Canadians are feeling the financial strain. In a six-part series this summer, The Canadian Press is speaking...
Read more
Netherlands

Unsurprisingly, most data breaches are caused by hacking

The majority of all data breach incidents were down to pure hack attacks, new research has found.A report from Flashpoint found that of all...
Read more
Load more
Facebook
Instagram
LinkedIn
Pinterest
Tumblr
Twitter