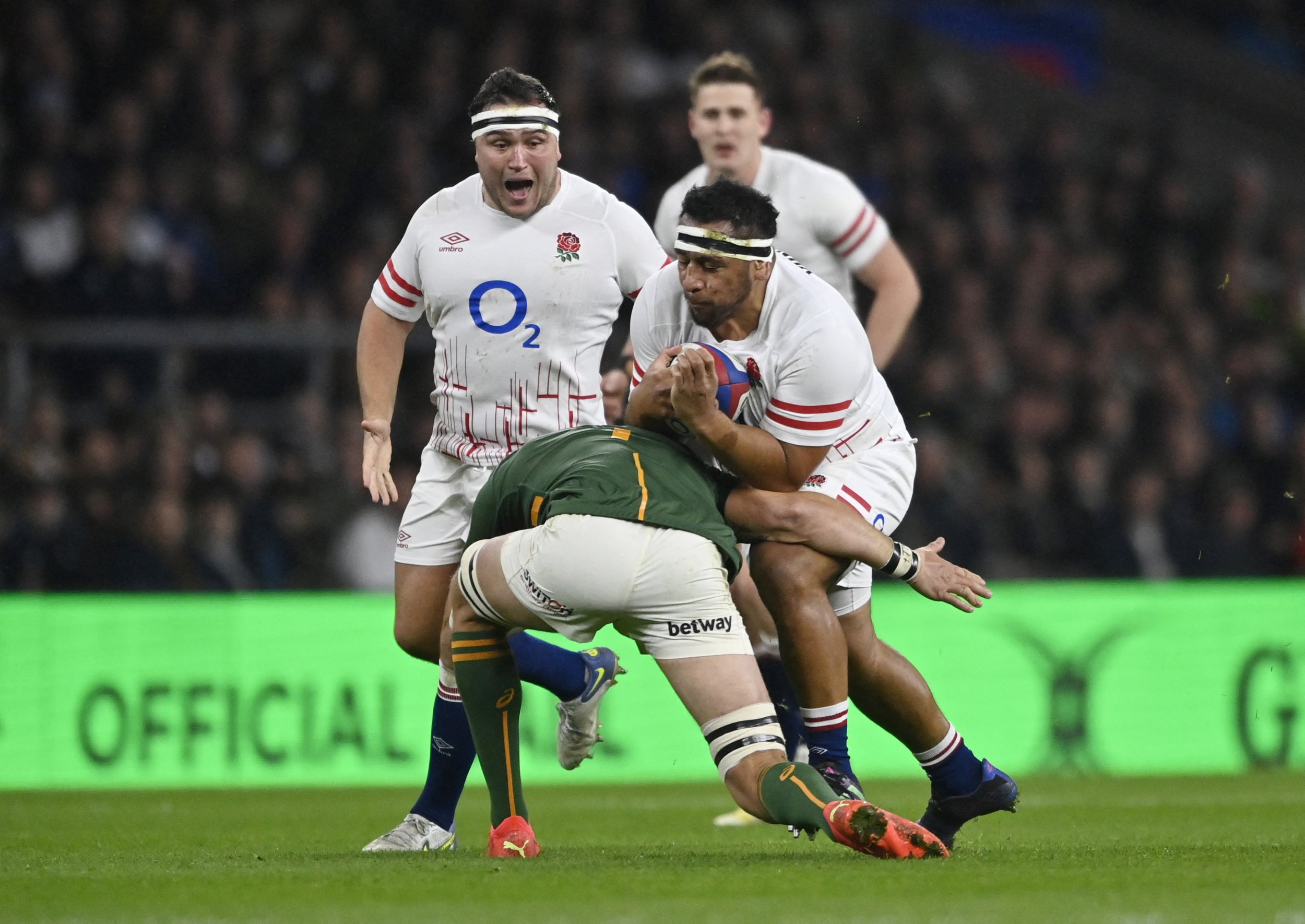 TWICKENHAM — England closed out their autumn with a dismal performance against world champions South Africa at Twickenham.

The match mirrored the 2019 World Cup final as the Springboks dominated in the set-piece, particularly in the scrum, with the sprightly Kurt-Lee Arendse playing the role of Cheslin Kolbe.

Here are the England player ratings:

1 Mako Vunipola: Like his front-row colleagues, he was hooked after just 40 minutes after a dismal half full of Springbok dominance at the scrum. 5/10

2 Jamie George: Had spent much of the autumn as Eddie’s secondary hooker and was given a chance tonight which he failed to take. 4/10

3 Kyle Sinckler: Like Mako, he was outmatched at scrum time and looked uncomfortable before leaving the pitch after a poor first 40. 5/10

4 Maro Itoje: Took second-place in the battle of the beasts against Eben Etzebeth… just like the 2019 world cup final and the 2021 Lions tour. 5/10

5 Jonny Hill: An instrumental part of the flood of silly penalties that England conceded throughout the game. Let his aggression get the better of him too and put his own side under pressure. 4/10

6 Alex Coles: It’s been a tough autumn for Coles at times, but he seemed to leak mistakes in the first half tonight and lasted just five minutes in the second before being sent to the bench. 5/10

7 Tom Curry: His being penalised late in the first half put England under pressure. That pressure carried into the second half and resulted in a yellow card for him, which gave way to a Springboks try soon after. 5/10

8 Billy Vunipola: Like Tuilagi, the power he once wielded looked faded. His carrying lacked any real threat and was all too easily swallowed up by the Boks. 4/10

9 Jack van Poortvliet: Not quite as horrific a half as last weekend, but this was hardly an improvement. Was complicit in England’s poor kicking from hand and guilty of a few poor passes. 5/10

10 Marcus Smith: Had such little ball to work with as England registered a measly six seconds in the Springbok 22 in the first half. Unfortunately his most memorable contribution was Kurt-Lee Arendse burning him for the game’s opening try. 5/10

11 Jonny May: Was caught out on the wing a number of times by South Africa. The attacking threat he once posed as a world-class winger looks nowhere to be seen. 4/10

12 Owen Farrell: He was flawless from the tee before Saturday night but missed two relatively simple penalties in the opening 22 minutes. Looked livelier as the game aged, and peculiarly once Marcus Smith left the field. 6/10

13 Manu Tuilagi: England’s Tuilagi-dependence has been well documented, but it became clear tonight that he isn’t the physically dominant centre he once was. Or at least he can’t be against a team like South Africa. 5/10

14 Tommy Freeman: Unfortunately for this talented youngster, he was barely noticeable in the first half – more a symptom of England’s lack of offense than his own doing. 4/10

15 Freddie Steward: For the first time this autumn, the full-back had some noticeably poor moments under the high ball, with three handling errors in the first half alone. Made the Twickenham crowd stand up at times, but didn’t look anything like his world-class self. 5/10

16 Luke Cowan-Dickie: The hooker’s biggest moment of the game was undoubtedly Thomas Du Toit’s shoulder ramming into his head for a red card. 4/10

17 Ellis Genge: Took to the pitch with his trademark aggression and brought some fire, but like his front-row predecessors, he soon fell victim to the Bok’s scrumming supremacy. 6/10

18 Will Stuart: Couldn’t light up the game like he did against New Zealand. Came off the bench and was met immediately by a dominant Springbok scrum before being injured late on. 6/10

19 David Ribbans: Subbed on for Alex Coles early in the second half and looked about as decent as any lock could against this South Africa pack. 6/10

20 Sam Simmonds: Entered the game after almost 70 minutes of Springboks dominance and wasn’t given much time to make a dent. 5/10

21 Ben Youngs: Funny how things change so quickly. Twickenham cheered as Youngs took to the pitch. Like last week he came on and brought some remedy to England’s attacking woes, but it was already too late by then. 6/10

22 Henry Slade: It was so clear what he brought to the side when he entered the fray against the All Blacks last weekend. He did the same here tonight, adding directness to England’s attack and scoring their first try in the 71st minute. 7/10

23 Jack Nowell: Brought directness in attack in place of Freeman and made a break that led to England’s try. But another player who may be getting into the England side based on past credentials rather than what he brings now. 6/10

In Paços de Ferreira, the 'incarnates' took the lead with a goal by the Spaniard Grimaldo, in the seventh minute, and extended the lead...
Read more
EUROPE