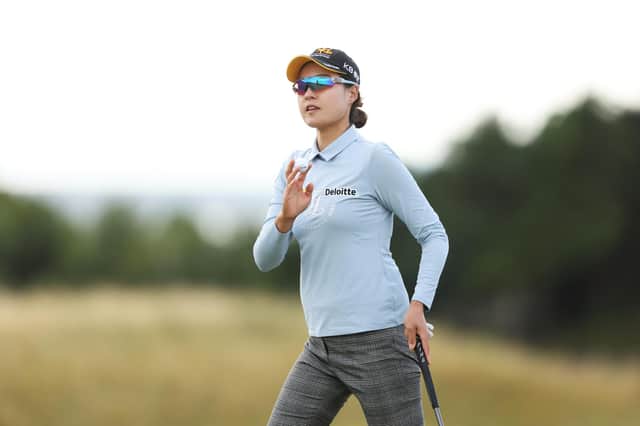 In Gee Chun acknowledges the crowd during the second round of the AIG Women’s Open at Muirfield. Picture: Richard Heathcote/R&A/R&A via Getty Images.

That’s what In Gee Chun, a three-time major winner and world No 11, is widely called in her native Korea due to her keen sense of hearing and she even has a fan club called the ‘Flying Dumbos’.

After two testing days on the East Lothian coast, Chun is out in front in the first women’s professional tournament to be hosted at the magnificent home of the Honourable Company of Edinburgh Golfers.

Having followed up an opening 68 with a 66 – her best score in eight appearances – that saw her storm home in 31, the 27-year-old sits on eight-under-par, one ahead of Swede Madelene Sagstrom and South African Ashleigh Buhai after they both carded best-of-the-day 65s.

On a tasty halfway leaderboard, Chun’s compatriot, 2015 winner Inbee Park, is a further shot back after she equalled Cristie Kerr’s record for the most rounds in the 60s in this event with No 14 and No 15 so far this week.

For the second year running but this time as a professional, Louise Duncan will be cheered on by a small army of home fans over the weekend, having reached the halfway stage in the top 20 once again, with Gemma Dryburgh also still flying the Saltire after making the cut for the first time in three attempts in this event after a classy 69.

Chun had two bogeys on her first-day card and one second time around. She’s aiming to win a bet before the week is out. “Before the start of the tournament, my caddie, Dean Herden, and I saw the course and decided on a little bit of betting on our game this week,” said Chun. “If I have a bogey-free round, he’s going to pay for dinner and pay me $100.

Madelene Sagstrom putts on the 11th green in the AIG Women’s Open at Muirfield. Picture: : Richard Heathcote/R&A/R&A via Getty Images.

“It’s fun, but it puts me in the right mindset to play this course. I’m going to keep trying to have a bogey-free round, that’s my goal.”

The Gunsan native won the US Women’s Open in 2015, added the Evian Championship the following year then the Women’s PGA Championship earlier this year. That means she’s chasing a career grand slam. “When I was growing up, I always think about the career grand slam. I think just every player dream about it and I have a chance,” she said.

Sagstrom, a captain’s pick for the 2017 Solheim Cup, finished joint-second behind Swee Anna Nordqvist at Carnoustie 12 months ago. “I made a good run for it, but Anna defeated us all,” she sid of that effort, setting up a chance to go one better with a second-day salvo that contained eight birdies.

Buhai, who is making her 15th appearance in the event, led by three shots at the same stage at Woburn in 2019 before ending up fifth. She’s back in contention after an event-best round that was illuminated by an eagle at the fifth.

“Every time you’re in position, you’re a little more familiar,” said the three-time LET winner. “Woburn’s very different, but I love links golf and this is my favourite tournament of the year. Super chuffed with how I played.”

She’s trying to follow in the footprints of Ernie Els, who landed his first Open win here in 2002. “We were playing our practise round and I was youtubing his famous bunker shot (at the 13th) and trying to do it,” she said. “He was my hero growing up.”

Park, a seven-time major champion, landed her win in this event at Turnberry after struggling at first with links golf. “It was so different and I didn’t know if I was enjoying myself because it was always rainy, always windy, I was miserable,” she admitted. “But then, after a few years, I really started enjoying links golf and I’ve fallen in love with it more and more.”

Green, who sits just three shots off the lead after picking up four birdies in the last five holes in a second-day 66, landed her maiden major victory in the 2019 Women’s PGA Championship. She finished in the top 10 in that event again this year, as well as the Chevron Championship.

“I feel like I’ve been playing a lot more consistent this year,” said the world No 19. “It’s about trying to contend as much as possible in majors and hopefully get my name on the trophy again. It’s nice to see the progress that I’ve made in the preseason reflecting on the golf course.”

Duncan, who is playing in only her second event as a professional, having tied for tenth as an amateur 12 months ago, sits six off the pace after following Thursday’s 67 with a 73.

“It was a bit of a grind,” she said of her second circuit, which included a run of three straight bogeys on the front nine but also a lovely birdie-2 at the 13th, “but I’m happy with the score and also two-under for two rounds in testing conditions.”

Growing in confidence with each passing week, Dryburgh signed off an impressive morning’s work by hitting her approach from 190 yards to three feet at the last for a closing birdie to sit on two-over.

“It was probably the worst I could have shot, to be honest,” declared the 29-year-old, who had missed the cut in both 2020 and 2021. “I hit the ball really well and had some nice chances, but it was nice to get a birdie-birdie finish.”

After rounds of 74-72, Nordqvist became the third successive defending champion to miss the cut in this event, but her husband, Scot Kevin McAlpine, is working over the weekend as he’s currently caddying for American Sarah Schmelzel, who made it on two-over.

Buenos Aires, one of 6 cities where you can live with $1,000 a month or less. (No photo: Matias Repetto/GCBAzzz) Dollar of course...
Read more
World