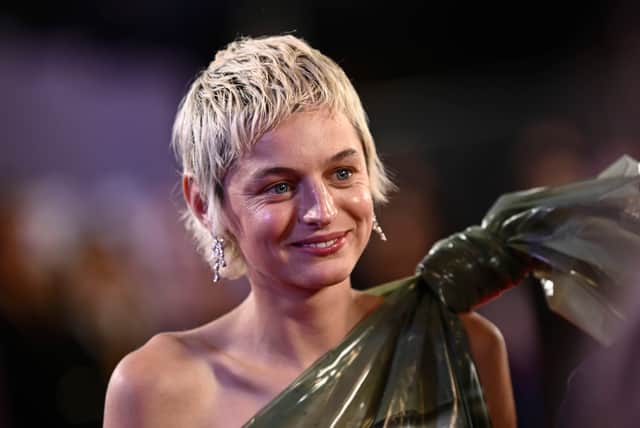 In a new interview with the BBC Today Programme, Emma Corrin called for awards bodies to move away from gendered categories like Best Actor and Best Actress

In a new interview, Emma Corrin has called for awards ceremonies like the Oscars and the Emmys to introduce gender-neutral categories.

Speaking to the BBC’s Today Programme, Corrin suggested that separate Best Actor and Best Actress categories weren’t “inclusive enough at the moment”; instead, they said, they “hope for a future in which” gender-neutral award categories are instituted.

“It’s difficult for me at the moment trying to justify in my head being non-binary and being nominated in female categories,” explained Corrin, before going on to ask “when it comes to categories, do we need to make it specific as to whether you’re being nominated for a female role or a male role?”

Debates around gender-neutral categories at awards shows have become louder in recent years, with many awarding bodies choosing to adopt such categories. Earlier this year, for example, the Spirit Awards, the Canadian Screen Awards, and the British Independent Film Awards replaced their Best Actor and Best Actress awards with a single Best Performer category.

They’re following an example set by the Recording Academy, MTV, the Gotham Film & Media Institute, and the Television Critics Association, all of which have moved to gender-neutral categories across the past decade.

MTV’s move away from gender-specific categories in 2017 drew particular attention, with Emma Watson winning their first gender-neutral acting award, though the Recording Academy removed female pop vocal performance and male pop vocal performance distinctions for the Grammys five years earlier in 2012. Since that change was made at the Grammys, the pop solo performance category has seen six wins for women (with three for Adele) and three for men (with two for Ed Sheeran).

A Bafta spokesperson said the organisation was “engaged in proactive and thoughtful consultation on this subject”; the Academy of Motion Picture Arts and Sciences, the body that awards the Oscars, are believed by some to be considering such a change also but have made no public comment.

Writing in industry trade magazine Variety in 2019, Michael Schneider noted that “in Hollywood, craft awards aren’t separated that way,” highlighting the fact that, for example, there’s no Best Male Director or Best Female Director Oscar. Schneider also pointed out that, despite frequent arguments to the contrary, there’s no evidence that individual performance awards would lead to more men being nominated, suggesting that “if this year’s MTV and TCA nominations are any indication, it’s women who are dominating the competition”.

Corrin, who won a Best Actress award at the Golden Globes in 2021 for their performance in The Crown, did go on to note that the parts themselves were more important than the awards that recognise them.

“You can discuss awards and the representation there, but really the conversation needs to be about having more representation in the material itself, in the content that we are seeing for non-binary people, for queer people, for trans people, because then I think that will change a lot.”

That in turn, they argued, would naturally lead to changes in award categories. “When those parts come up, meaning more people and more actors are playing those roles then I think there will be more of an urgency with which these questions will be addressed.”