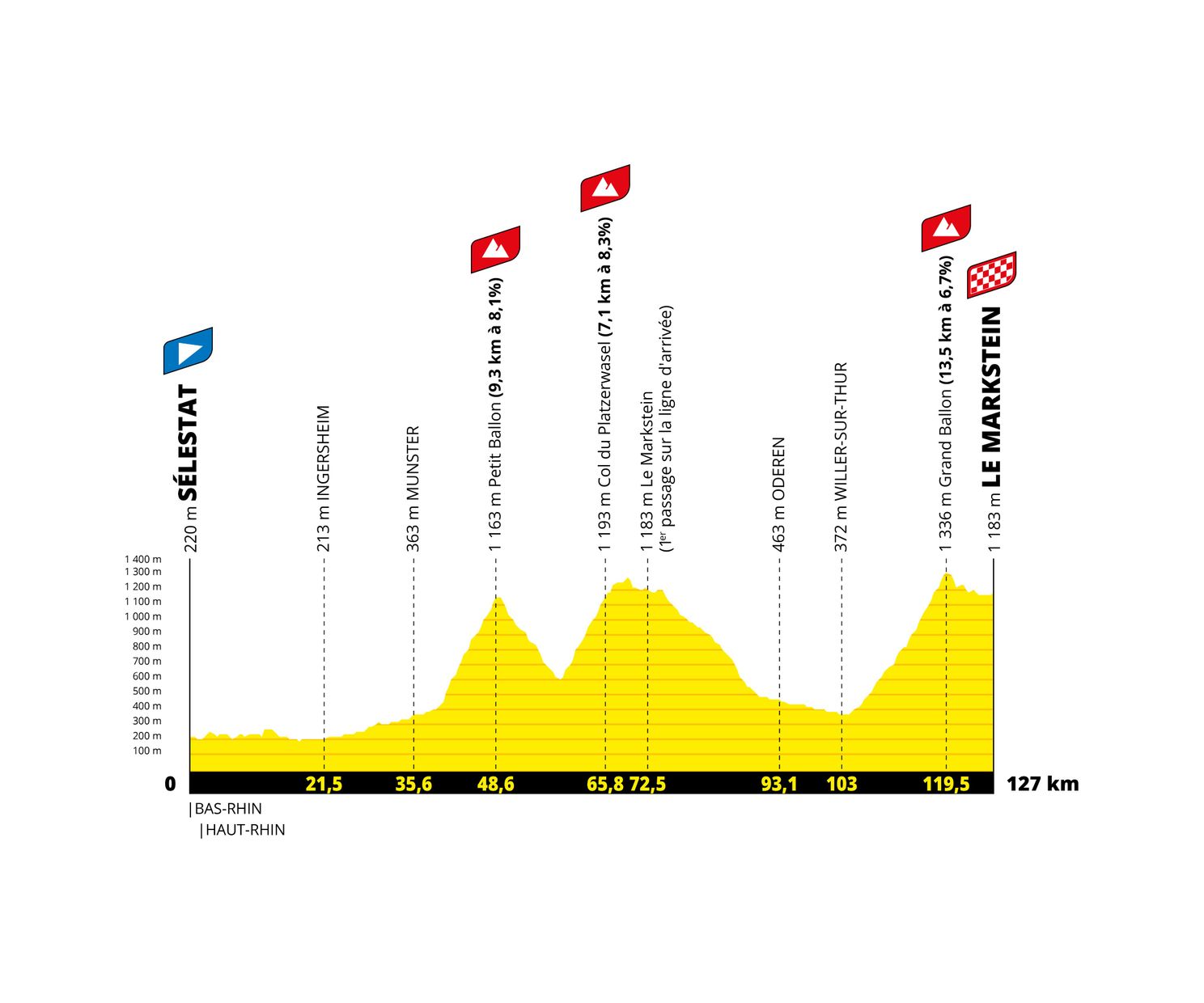 Enough rambling, time to climb! The women in the Tour de France Femmes ended up in the Vosges in the final weekend, where the organization has mapped out two wonderful mountain stages. On Saturday in stage 7 we get part one, food for the women of the general classification. In the leader’s jersey discusses the course, the weather and the favorites for the stage win.

Three cols, all three not really known from the Tour de France for men. While the Vosges are used as a starter for the men, the Tour will be decided here for the women. After a flat run of about forty kilometers, the Petit Ballon serves as the first serious obstacle of this Tour. With 9.3 kilometers at 8.1 percent on average, it is a very tough thing. A very irregular climb, with percentages of 6.3 percent to 10.2 percent.

After the Petit Ballon there is a quick descent and we immediately start at the Col de Platzerwasel. Also a big climb, with 7.1 kilometers at 8.3 percent on average. The amount of black pieces in the profile card is growing, and with it no doubt the nervousness. It’s a shame that the top of this climb is sixty kilometers from the finish, but without a doubt the peloton will be broken into pieces here.

Strangely enough, the last climb of the day is the least difficult, although with 13.5 kilometers at 6.7 percent you can still speak of a tough col. The difficulty is mainly in part two of the climb, where it actually never drops below 7 percent. And with the top seven kilometers from the finish, now is the time to go all-in. After the Grand Ballon it is a short descent, to then thunder on the big plate to the finish.

At the start at 1.45 pm it will be about 28 degrees on Saturday, so the ladies better apply themselves well. The sun will continue to burn during the stage, with about 20 degrees still in the forecast at the top of the climbs. The wind blows from the northwest all day, at wind force 2 to 3. That means tailwind towards the final climb, but also a bit against the last part of the final climb. The rest of the day the wind is fairly at your back.

The seventh stage in the Tour de France Femmes is going to be intense and so we are pushing all the big names for the classification. No way that a flight will take the win here, the classification women in their first Tour de France are far too motivated for that. Annemiek van Vleuten is the woman to beat in this field. The leader of Movistar had a tough week with stomach complaints and loss of time, but she seems to have recovered in time to give the best of herself in the final weekend. Is she as good as her overall victory in the Giro Donne? Or even a little better?

In the Giro the big competition came from UAE and from Mavi Garcia. The Spanish has already lost a lot of time due to a crash in this Tour, which might give her the space to try something for a stage win in the final. On the other hand, she is only a minute behind Van Vleuten, for example, so Garcia will have to deal with everyone in a direct duel if she wants to win.

Third big favorite: Demi Vollering. The Dutch leader of SD Worx has rolled through the Tour reasonably well so far, which she has made her big goal all year. She didn’t ride a Giro, so we’ll see if that makes a difference on the climbs. Like Van Vleuten, Vollering can count on an excellent team around her. It is an eternal shame that Marta Cavalli has already gone home, otherwise we would have had a great four-game with Van Vleuten, Garcia, Vollering and Cavalli.

Maybe we’ll get it now, because Katarzyna Niewiadoma seems in fine shape. The Polish rider from Canyon//SRAM Racing is in the best position of the leaders, for example already half a minute ahead of Vollering. However, there is rarely any question of defensive racing at Niewiadoma. It likes to fly in, whether it’s a profit or a collapse. This also applies to Ashleigh Moolman (also from SD Worx). Just like Niewiadoma, Moolman can also beat the best uphill on a super day.

If we scroll further through the list, we are especially very curious about some other women. Cecilie Uttrup Ludwig is explosive, with that she already won the third stage uphill. But can the Danish also handle this work? In principle, yes, it is not for nothing that she already won the mountain and youth classification in the Giro. Now that Cavalli is gone, all the pressure is on her shoulders. Team DSM is fully aiming for Juliette Labous.

If you play responsibly, you keep it fun. What does gambling cost you? Stop on time, 18+.

Are you looking for more interesting betting tips? Then visit Sportbookies.nl.

Peter FitzSimons believes he is an expert on the identity of Indigenous people and what they want for themselves, as he once showed in...
Read more

Two containers of food bound for Afghanistan have been cancelled by a Canada-based aid agency because of a law banning any dealings with the...
Read more
Irelands