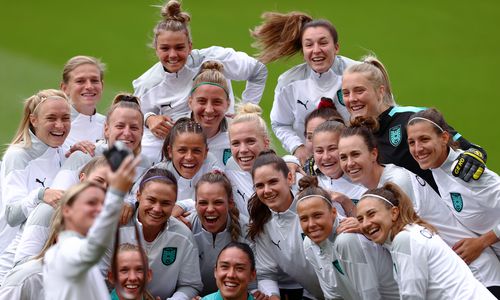 London/Vienna. The expectations of footballers and fans before the European Championships have never been so high and the tournament in England fulfilled them. The final today, Sunday evening at 6 p.m., in front of the new record crowd at London’s Wembley Stadium, marks the culmination of a path that has brought new quality to the game, but above all has strengthened the visibility and presence of the sport. Over 550,000 fans followed the 31 games on site, more than doubling the record from 2017.

“I’m not very surprised, I knew about the quality,” said Uefa President Aleksander Čeferin. “The numbers are outstanding, but the biggest surprise for me are those who are surprised that women’s football is at such a high level.” Doubling the prize money to 16 million euros was a significant step, and Europe’s association already wants the next ones put in the near future. “We have to develop women’s football in exactly the same way as men’s football. We have to develop it on a technical level and we have to invest.”

The progression of the game in this EURO finals is underpinned by Opta data. A comparison of the 14 teams that took part in the 2017 finals shows a six percent increase in successful passes. On average 77 percent of passes, England even improved its pass rate by 20 (!) percent, Austria was responsible for the second-biggest improvement (17). The offensive development of the ÖFB team was clearly visible in the group games against hosts England (0:1), Northern Ireland (2:0) and Norway (1:0) and was rewarded with renewed promotion.

The Austrians thus maintained their place among the top in Europe and for the second time reached the quarterfinals as the worst-ranked team (number 21 in the world), in which they only had to bow to record winners Germany after a hard fight (0:2). Not only the Spanish newspaper “AS” described the selection of Irene Fuhrmann as the “discovery of the tournament”. The team boss herself once again emphasized the output in relation to the less than 12,000 active female soccer players in the country. “In contrast to the top nations, we have a much smaller pool of players, so our performances are all the more fascinating and can be judged more highly,” said Fuhrmann.

Especially in the last third, Austria increased its pass rate by 13 percent – again only England (21) was better. On average across all teams, 64 percent of the passes found a colleague. Five years ago it was 57, which shows more patience and precision when setting up attacks. Ultimately, this is most noticeable in the goal balance. Because with the 92 scored so far (before the final), it’s just over three per game compared to 2.19 in 2017 (then 68 goals were scored in the entire tournament). With the exception of the quarter-final between France and the Netherlands, none of the 30 games played so far have remained goalless after 90 minutes.

There were 17 fouls per 90 minutes on average, seven fewer than at the previous European Championship. The pace is higher thanks to fewer interruptions, and fewer mistakes resulted in goals being conceded (8 vs. 12).

In addition to the record number of fans in the stadiums, Uefa also reported new best values ​​for visibility in social media. Over 150 million interactions were recorded for the group stage alone, most of which took place on the platform TikTok (39.7 percent), which is particularly popular with young people.

All of this makes Uefa boss Čeferin confident. “Maybe some people should start thinking that it’s worth investing in women’s football.” The awarding of the next EM 2027 in December will show the way. (swiss)

Brazil won the Copa America for the eighth time. Without the exceptional trio of Cristiane, Formiga and Marta, the Seleção beat hosts Colombia 1-0 in the final in Bucaramanga thanks to a penalty from Debinha (39′).

South Africa triumphed for the first time in the Africa Cup of Nations a week ago, beating Morocco 2-1. A double strike from Hildah Magaia secured the first title win after five lost finals.

Ten illegal gambling establishments were identified and shut down by police officers in Paphos since the beginning of the year. According to a statement...
Read more