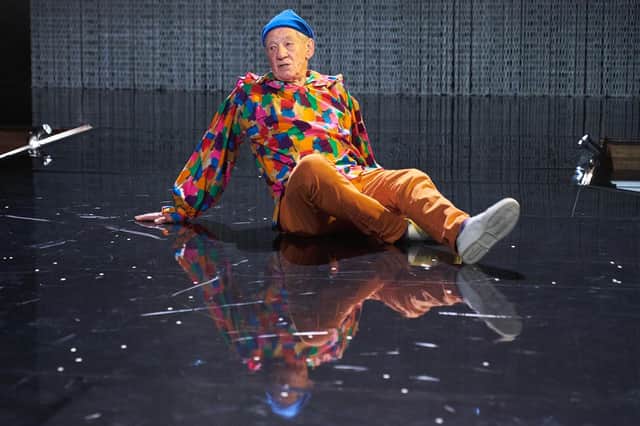 The concept of Hamlet as a ballet is enough to strike fear into the heart of theatre-lovers. Shakespeare’s masterpiece shrunk to 75 minutes, without most of the words? Even when such words as remain are to be spoken by Sir Ian McKellen, the prospect leaves one sceptical at best.

Director and choreographer Peter Schaufuss is the driving force behind this production (McKellen gets co-credit for the concept) premiering at the Fringe in Schaufuss’ venue, the beautifully refurbished St Stephen’s Church in Stockbridge.

If you go expecting a text-based Hamlet, this isn’t it; the text that survives is brief, mostly fragments of the most famous soliloquies. It’s not a traditional ballet, either, it’s a fusion of the two, tracing the beats of the story in dance but with McKellen’s powerful presence on stage throughout holding the still centre while the action swirls around him.

McKellen has played Hamlet twice: once in Edinburgh in 1971, and again last year in an age, colour and gender-blind production at the Theatre Royal Windsor. It’s a pleasure to hear him deliver these lines, seemingly effortlessly, each phrase freshly minted. At 83, he doesn’t flinch from a production which is physically demanding and constantly on the move.

If one can accept the loss of most of the text (and it is a big ask), the approach does have things to offer. McKellen shares the lead role with Danish dancer Johan Christensen; they wear identical costumes and seem linked by a constant dialogue, in words and movement. It amplifies the sense, which exists in the play, of Hamlet in dialogue with himself, in two minds about what he needs to do, questioning his own prevarication.

The relationship between Hamlet and Ophelia (a delicate performance by Katie Rose), often marginalised in the play for reasons of plot, is completely emotionally present in their pas de deux. The more sultry relationship of Claudius and Gertrude has its moment, too, the hasty marriage even swifter given the condensed nature of the production. The Players scene works well, and the final duel is a cold, visceral wrestling match.

If the subtlety and complexity of the text is largely missing, what we get instead are emotions writ large. Schaufuss tends to go for obvious choices in terms of expression – we’re in no doubt who is in despair, who feels guilty, who is enraged. Rosencrantz and Guildenstern do a slightly uncomfortable comic turn, a kind of tweedle-dum and tweedle-dee, bouncing around in their matching outfits.

With the action coming forward into the round, the main staging is a chainmail curtain on which occasional projections create ramparts (the ghost), or water (Ophelia). Benny Goodman’s superb lighting reflects the changing moods, however, the score by Ethan Lewis Maltby is heavy at times, big on synth with occasional choral interludes.

What we have, then, are the bare bones of Hamlet. But what bones they are. Over the years, at this festival, people have done what they will with the Bard (Sh*t-faced Shakespeare, anyone?) and, like it or not, the plays keep standing. And the audience keep responding to them: at the end of this Hamlet they, too, were on their feet.

Share
Facebook
Twitter
Pinterest
WhatsApp
Previous articleHow Is The US Southern Command’s Medical Assistance Mission HEART 22 In Guatemala And Honduras?
Next articleArchaeologists Say Swastika-decorated Ruins Could Be A Clue To The Palace Of Genghis Khan’s Bloodthirsty Grandson

Two containers of food bound for Afghanistan have been cancelled by a Canada-based aid agency because of a law banning any dealings with the...
Read more

Two containers of food bound for Afghanistan have been cancelled by a Canada-based aid agency because of a law banning any dealings with the...
Read more
World