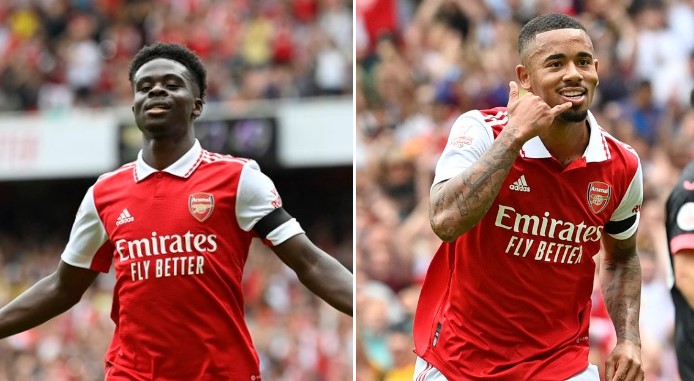 New Arsenal signing Gabriel Jesus kept up his incredible pre-season form with a hat-trick in a 6-0 win over LaLiga club Sevilla.

Jesus bagged a hat-trick in this Emirates Cup rout of the Spanish side. One can not help wondering what thoughts Pep Guardiola could be having after letting the talented forward go to the Emirates stadium in North London.

A touching tribute was paid to Jose Antonio Reyes in the ninth minute of the game, a player who graced both of these sides, sadly passing away in 2019.

Opening the scoring for the Gunners was Bukayo Saka, who calmly sent Sevilla keeper Bono the wrong way with his penalty kick after 10 minutes. Jesus was on hand once again, hitting two goals in as many minutes.

His first came after 13 minutes when he latched onto a fumble by 31-year-old Bono. Then, timing his run behind the Sevilla defence to absolute perfection, the Brazilian buried a deep cross from Gabriel Martinelli in the 15th minute.

Missing all the fun? 😀

Saka claimed his second after only 19 minutes of play. This time he placed the ball between Bono’s legs after the goalkeeper directed a poor clearance straight to the 20-year-old England international.

It took Jesus until the 77th minute to win the match ball, after a scramble in the penalty area when the Sevilla backline failed to clear Martinelli’s cross. The sixth goal came courtesy of Eddie Nketiah, on as a substitute. The striker was neatly set up on 89 minutes by Arsenal’s new club captain, Martin Odegaard.

From defence to attack in the blink of an eye 🌪️ pic.twitter.com/l56KXNhLuI

“Of course I was happy, proud, and grateful, for the trust and for him wanting me to be the captain. That’s a big achievement for me and it’s nice to be part of such a good team, so I’m going to enjoy that”, said Danish international Odegaard about Mikel Arteta’s move to make him captain.

💬 “I’m very proud to be captain of this fantastic football club.”

“He represents the values of this football club, of his teammates, of the staff. He’s respected by everyone inside the club. I’m proud to announce him as captain”, responded Arteta.