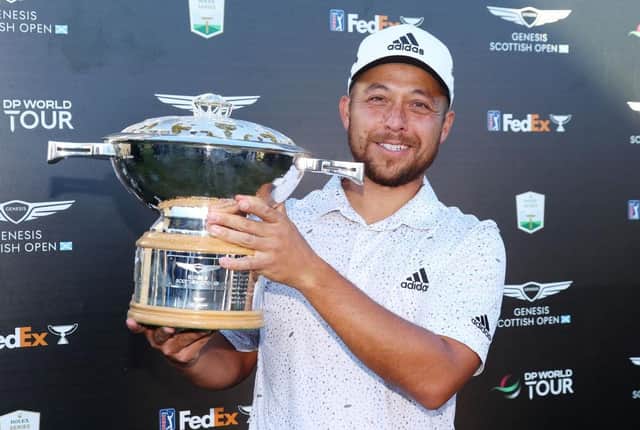 This year’s edition of the Rolex Series event was the first to be co-sanctioned by the US-based PGA Tour and the DP World Tour, formerly the European Tour, through a Strategic Alliance.

It resulted in the tournament attracting its strongest-ever field, which was also the most powerful line up in terms of world ranking points on the DP World Tour for an event outside the majors and WGCs.

The 2023 edition is heading back to The Renaissance Club in East Lothian, where it has been staged for the past four years.

Helped by playing in the event, Australian Cameron Smith won the 150th Open at St Andrews, as American Collin Morikawa did as he got his hands on the Claret Jug at Royal St George’s last year.

Next year’s Genesis Scottish Open will take place on 13-16 July – the week before the 151st Open at Royal Liverpool.

As was the case this year, the PGA Tour’s Barbasol Championship, which takes place in Kentucky the same week as the Scottish Open, and the Barracuda Championship in California the following week will have spots on offer to DP World Tour players.

The thee co-sanctioned tournaments will be part of a schedule comprising 47 events and boasting record prize-money, with players competing for elevated purses ranging from $15 to $25 million.

As had already been announced, qualification criteria for the FedExCup Playoffs has been revised starting in 2023.

Just 70 players will earn a start in the first Playoffs event, the FedEx St. Jude Championship, followed by 50 players advancing to the BMW Championship, with the Tour Championship field remaining at 30 players.

PGA Tour Commissioner Jay Monahan said: “We’ve heard from our fans and the overwhelming sentiment was that they wanted more consequences for both the FedExCup regular season and the Playoffs, and to further strengthen events that traditionally feature top players competing head-to-head.

“We feel strongly we’ve accomplished all of these objectives and more, creating a cadence of compelling drama for every tournament throughout the season.”

Cycling on TV August 12, 2022 | Scandinavian races and Olympic stars in action on the European Championship track!

Cycling on TV August 12, 2022 | Scandinavian races and Olympic stars in action on the European Championship track!

She was the young blonde babysitter blamed for the break-up of Olivia Newton-John’s first marriage after striking up a flirtation with the actress’s husband...
Read more
Load more
Facebook
Instagram
LinkedIn
Pinterest
Tumblr
Twitter