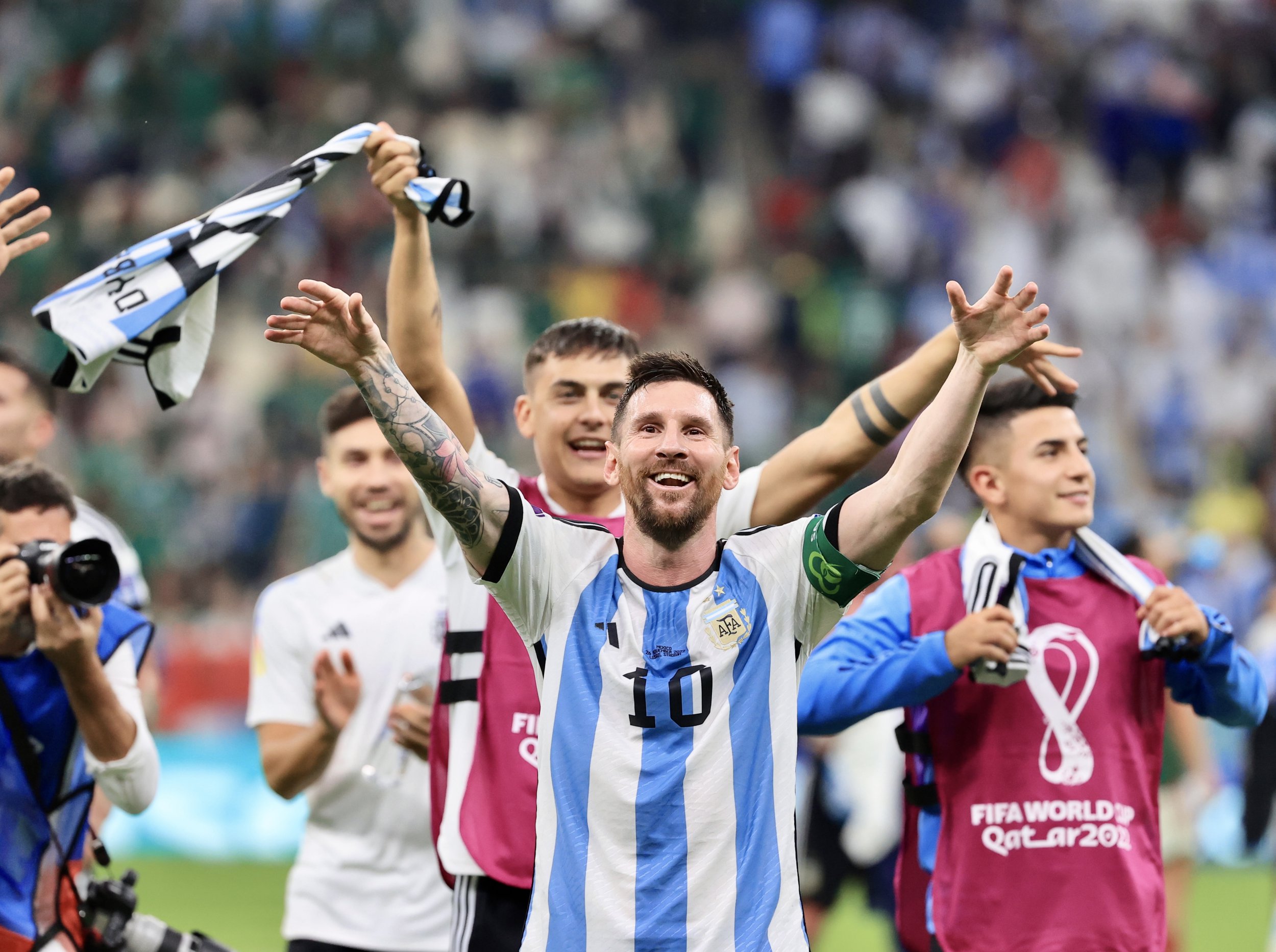 LUSAIL ICONIC STADIUM — A fleeting moment, one sweet Leo Messi intervention was all it took. The ball squared by Angel Di Maria was gathered and dispatched almost in the same movement. The familiar short back lift on the edge of the box sent it skidding past Guillermo Ochoa in the Mexico goal, an echo of so many of the 700-odd goals Messi has scored since he first moved among us at Barcelona 18 years ago.

Messi did not run faster at any point than he did in sprinting towards the supporters behind the goal. It was a moment of unexpected purity. The world knows time is slipping through his fingers. So much was resting on this match. The whole of Argentina is invested in the idea that Messi might deliver an epic World Cup moment before his days are done. The love-in as his team-mates smothered him in gratitude and affection was freighted with meaning. It felt World Cup big.

The communion that followed with the fans was equally significant, a tender exchange between king and subjects. Their relationship has not always been straightforward. Messi has had to carry the burden of Diego’s Maradona legacy since his international debut in 2006.

One Copa America, claimed behind closed doors last year, is all he has to show for a career of 167 caps. Defeat to Saudi Arabia in the opening group game loaded this fixture with jeopardy. Argentina simply could not afford to lose. The fans behind the goal were still chanting their gratitude half an hour after the teams had left the pitch, every one of them intoxicated by heady thoughts of what might come next.

In this hands-on-hips phase of his career, Messi is mostly walking through games. He would struggle to register a thousand steps on his fitbit. This means he is largely unavailable for huge chunks of the contest. Argentina move the ball around looking for gaps whilst he is deciding whether he should engage or not.

This power dynamic was the very problem that got Manchester United into such a pickle with Cristiano Ronaldo before Erik ten Hag found his voice. Clearly, Lionel Scaloni must offer the team sheet to Messi for approval. But in the moments when the neurons fire and those short piston legs shift through the gears, we are treated to an ephemeral evocation of the menace he used to be.

The game had appeared headed for a stalemate before he struck, both teams determined not to cede ground in order that both would have a shot at going through in the final round of matches. It was a dogged, gritty, merciless encounter.

The first half was already into added time when Messi hit the box with any intent for the first time. A quick shift through the gears and a clipped pass to Marcos Acuna. The advancing left-back fired the ball across goal where the Mexican jailers dealt with it in their no-nonsense fashion.

Other than that the first half was notable only for the scant regard the players had for each other’s safety. Some of the tackles were Gangs of New York in nature, heavy duty butchery, two-footed lunges, elbows to the jaw, studs down the shin, that sort of thing. Manchester United’s Lisandro Martinez took one boot square on the side of his face. Martinez would not give way to a rhino, but this blow brought him to his knees.

Messi began to release what energy he had conserved. A couple of darting runs early in the second half hinted at what might be. Mexico were retreating ever deeper bringing Messi into the game almost by default. Where earlier he had players around him, he was beginning to find pockets of space. He was an easy pick for Di Maria in the 64th minute and that one swing of his left peg changed the destiny of this game, if not the tournament.

Mexico have beaten Argentina only five times in 37 meetings, most recently 18 years ago. Their approach to the night was shaped by history. A draw was the goal. Messi took an axe to that strategy before Enzo Fernandez sealed the victory with a special goal of his with just three minutes remaining. The result leaves all four teams in the group with a chance to progress following Poland’s win over Saudi Arabia earlier in the day.

Every day around lunchtime you can read what people think of the big news of the morning. Today: this is what you say...
Read more
Hot News

kick off of the 4th edition of the Dakar Music Expo

As girls basketball programs wrap up the regular season, it’s time for an updated look at the District 3 power ratings. Teams have until...
Read more

Every day around lunchtime you can read what people think of the big news of the morning. Today: this is what you say...
Read more
Hot News

kick off of the 4th edition of the Dakar Music Expo

As girls basketball programs wrap up the regular season, it’s time for an updated look at the District 3 power ratings. Teams have until...
Read more
World

Oxford City Council has activated its severe weather emergency protocol (SWEP) providing emergency accommodation for anyone - including people who have no right...
Read more
EUROPE