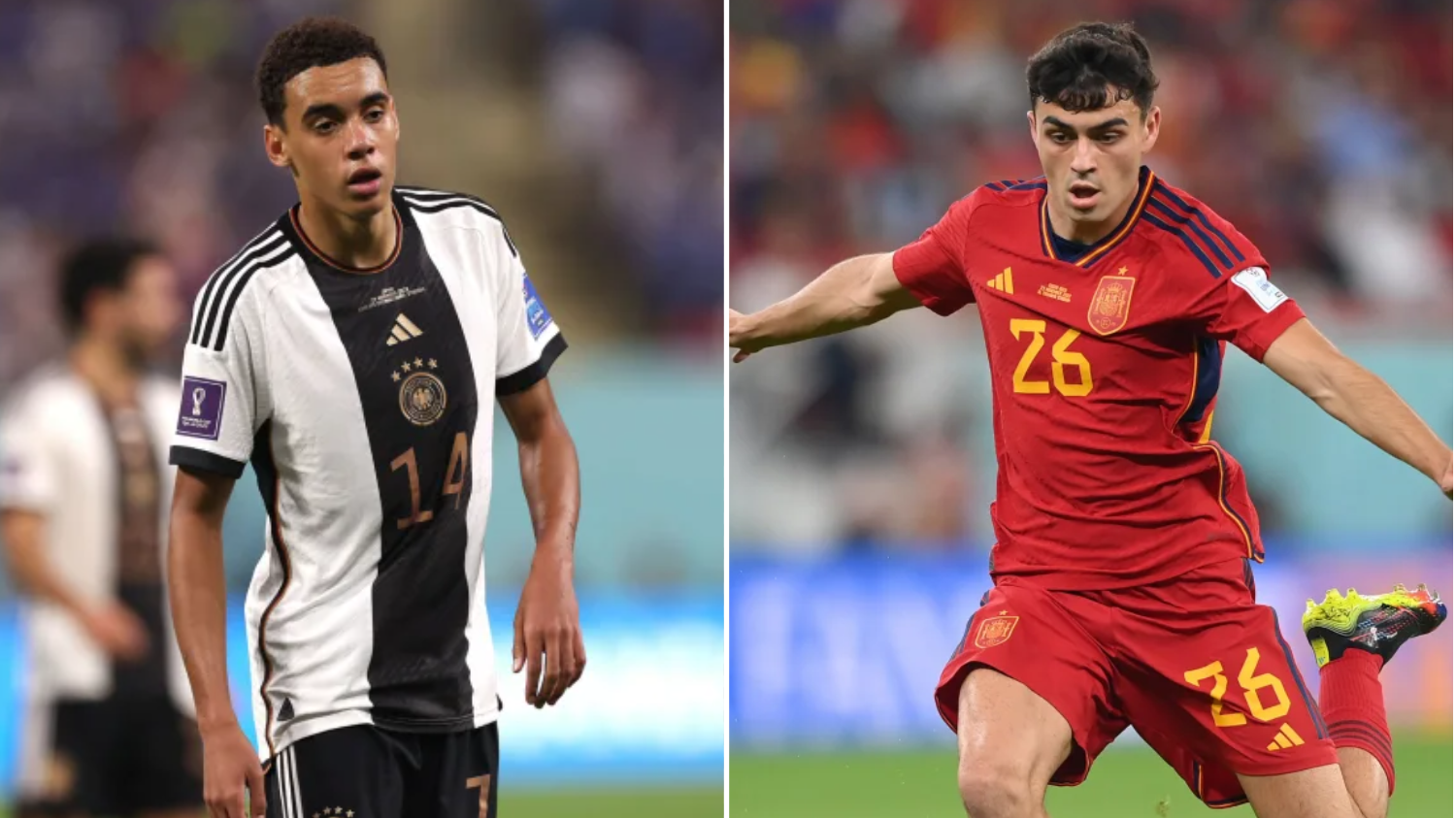 The modern football fan is often unable to just enjoy watching the best players in the world.

Instead a comparison has to be made. Messi vs Ronaldo is the obvious tedium that is awash on social media anytime either of the footballing behemoths touches the ball, but in the run-up to the Qatar World Cup fans the world over have been picking sides in the debate over which embryonic talent would light up the tournament.

You cannot enjoy both, you simply must pick one: Pedri or Jamal Musiala. After the first round of matches in Doha, the Spanish muchacho’s aficionados are the ones with the bragging rights after Pedri, 20, was instrumental in his side’s opening rout of Costa Rica, passing the Central Americans into oblivion, as any true top-class Spaniard should.

Such a showing settled the debate for many on social media, with Pedri pickers laughing in the face of those who suggested Musiala was the true heir to Thomas Muller’s throne for Germany, after Bayern Munich’s 19-year-old was part of the team humbled by Japan this week.

Ahead of tomorrow’s meeting in Al Khor of world heavyweights Germany and Spain, you write off the London-bred teenager at your peril, however, as the Japan debacle was not down to anything Musiala didn’t do. There is good reason the fleet-footed former Southampton and Chelsea youngster is such a leading light for Germany so early into his senior career, so much so that it appears he is his country’s best hope of them turning their stuttering recent World Cup record around.

“He [Musiala] has everything,” Germany legend Lothar Matthaus eulogised in September. “He has everything. He is becoming the complete player. He will be one of the very best players in the world. When he is on the field, this is like Messi three years ago.”

There was something Messi-like in Musiala’s jinking run against Japan as he sashayed past four defenders, in the tightest of half-spaces, before lashing over the top.

Had the net bulged, it would have been one of the greatest ever World Cup goals, on Musiala’s tournament bow. It came as no surprise to those who watch him regularly.

Playing in a similar position to Muller at Bayern seemed like it was initially going to hold back Musiala, but coach Julian Nagelsmann instead builds his team around the youngster, in whatever role he deploys him.
Müller’s star is fading. At 33, he is struggling to fend off the injuries more and more, but it matters little when the heir to his glittering throne is this good already.

Germany coach Hansi Flick knows full well what a talent he has got on his hands, having nurtured Musiala through the ranks at Bayern, before being instrumental in persuading the youngster to pledge his allegiance to Germany, the country of his birth, over England, where he grew up.

Much of what persuaded Flick to put so much faith in Musiala so soon is partly due to his incredible ability on the ball and unerring confidence to take the attack to players much more his senior.

It is also due to a real lack of an alternative when looking for players who have the X-Factor in his side.

Muller looked shorn of match fitness against Japan, starting his first match since September for club or country, Leroy Sane was not fit enough to play from the off, while Serge Gnabry is without an international goal in 2022.

Further forward, Kai Havertz has been hit-and-miss for Chelsea, first choice striker Timo Werner is sat at home – or on a beach in Dubai – while Youssoufa Moukoko is still very raw indeed.

Musiala seems undroppable. Flick drew much criticism at home in the aftermath of the seismic shock against Japan for taking him off, such is his popularity.

Pedri is another who relishes the grandest of stages, morphing into Andres Iniesta 2.0 week by week. That stage, however, must be shared tomorrow.

The players themselves won’t be aware of the social media jibes, or care which starlet is seen as world football’s next big thing along with Jude Bellingham, but if he can find a finishing touch to Messi-like wanders through defences, it will be advantage Musiala.

Knife attack in Schuman metro station: Suspect of knife attack has been placed under arrest for attempted murder

"The investigating judge interviewed the suspect of the knife attack in the Schuman metro station and placed him under an arrest warrant for the...
Read more
Hot News

Strike action is continuing on London buses this week, with a long-running dispute over pay between Abellio and the Unite union showing no sign...
Read more

Knife attack in Schuman metro station: Suspect of knife attack has been placed under arrest for attempted murder

"The investigating judge interviewed the suspect of the knife attack in the Schuman metro station and placed him under an arrest warrant for the...
Read more
Hot News

In Ramallah, Antony Blinken expresses his “sadness” after the death of “innocent Palestinians”