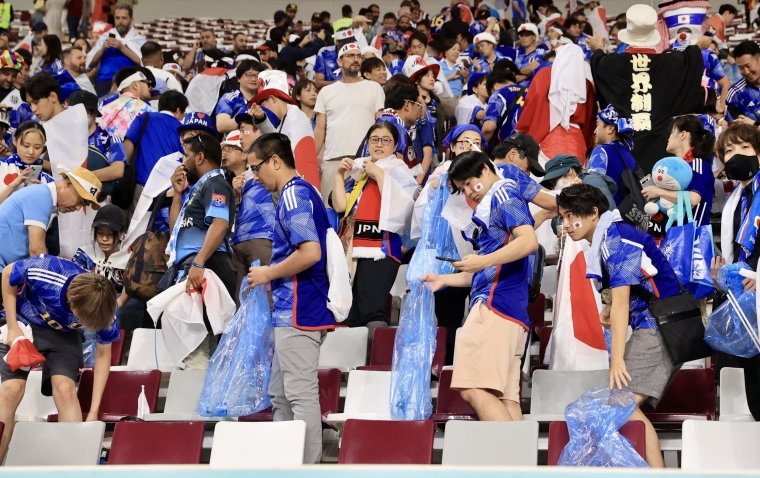 After becoming a “no fun zone” for the best part of three years due to the pandemic, the people of Japan allowed themselves to savour a long overdue celebration in the aftermath of one of the greatest shocks in World Cup history.

As soon as the final whistle in Doha’s Khalifa International Stadium had sounded, bringing an end to Japan’s improbable turnaround against Germany, adoring fans back home began streaming out of their homes and local bars to take over the streets and kickstart the celebrations.

In recent tournaments, Japanese football fans have been heralded as the most respectful on the planet. That much was evident once more when photos of Japan’s chant-a-minute “ultras” clearing up behind themselves in the stadium and footage of others reveling 8,000 kilometres away by the Shibuya Scramble Crossing in Tokyo – but only when the traffic lights were set to red – spread across social media like soy sauce in a dipping bowl.

“I think the entire country was filled with excitement over the magnificent win,” the country’s prime minister Fumio Kishida said with a dollop of understatement. “Yes, I believe it’s historic,” were manager Hajime Moriyasu words. “A historic victory to say the least, if I may.”

Like all glorious upsets, Japan’s triumph against the 2014 world champions already has its own moniker: The Miracle of Doha. Not even the most fervent followers of the Samurai Blue envisaged such a scoreline would be possible.

“It was a very heartening sight after nearly three years of the pandemic largely turning Japan into a ‘no fun zone’,” Dan Orlowitz of the Japan Times tells i of the jubilant scenes across the country. “Sporting events and concerts have gone on [since the pandemic] but with no singing or chanting allowed. Social distancing was in place basically until this year, and masking is still prevalent.

“Expectations beforehand weren’t tremendously high if we’re being honest, and that was mostly due to the presence of Germany and Spain. This absolutely shifts the narrative, though. Coming into the tournament I thought they could possibly squeak in [to the last 16] with four points, but now they’re more than capable of taking at least six.”

Ritsu Doan and Takuma Asano were the goalscorers who wrote their names into Japanese sporting folklore and the irony that both play in Germany’s Bundesliga – Doan for Freiburg, Asano for Bochum – was not lost on the German faithful. Considering more members of the squad play in Germany than Japan – eight to seven – though, perhaps it was unsurprising that Hansi Flick’s rattled ensemble suffered at the feet of Bundesliga-based stars.

“Wednesday’s result couldn’t have happened without the influence German football has had on the Japanese game,” says Orlowitz, while Moriyasu believes that the physicality of the European game has played an important role in “contributing to the development of Japanese players.”

While more members of the squad play in Germany than anywhere else, the squad is dotted around all across Europe, from London to Lisbon and Sociedad to Strasbourg. Like plenty of other divisions across the globe, the J League is losing its star players younger and younger as football’s finances swirl around an increasingly shallow pool. Previously, the lack of homegrown talent comprising Moriyasu’s squad has led to a sense of detachment from the fanbase.

“It’s a well-liked team among Japanese soccer fans, but among the general public there isn’t nearly as much buzz surrounding the squad as there has been at past World Cups,” according to Orlowitz.

“In the short term, a big factor behind that is the pandemic, which drastically reduced attendances and killed the usual matchday atmosphere. But over a longer term, the Samurai Blue have transitioned from being entirely based in the J League to being almost entirely based in Europe and that really makes it harder for those players to be a part of the daily conversation.

“Twenty-five to 30 years ago kids grew up wanting to be like Kazuyoshi Miura and Hidetoshi Nakata; now it’s easier for them to watch Miura [still going strong in Japan’s fourth-tier at the age of 55] play on the pitch than it is for them to see Daichi Kamada [of Frankfurt], Takumi Minamino [Monaco] or Kaoru Mitoma [Brighton].”

That has changed in light of Wednesday’s win, with the popularity of both the players and Moriyasu naturally soaring as a result, but those unlikely three points will count for little if Japan do not go on to finish the job.

Inevitably, expectations have been raised ahead of their second group game against a Costa Rica side that put in comfortably the worst performance of the tournament against Spain. A win may not necessarily guarantee Japan’s place in the World Cup knockout rounds for only the fourth time, but it would certainly edge them much closer. And if Moriyasu and his players do see it through, expect to see more scenes of jubilation back home.

The face embodied in the mural of Carmen Salinas in the square dedicated to the actress in the La Merced II neighborhood has changed...
Read more
EUROPE

SC Cambuur booked an important victory in the Eredivisie on Thursday. The Frisians won 0-1 against relegation competitor FC Groningen. The game...
Read more

The face embodied in the mural of Carmen Salinas in the square dedicated to the actress in the La Merced II neighborhood has changed...
Read more
EUROPE