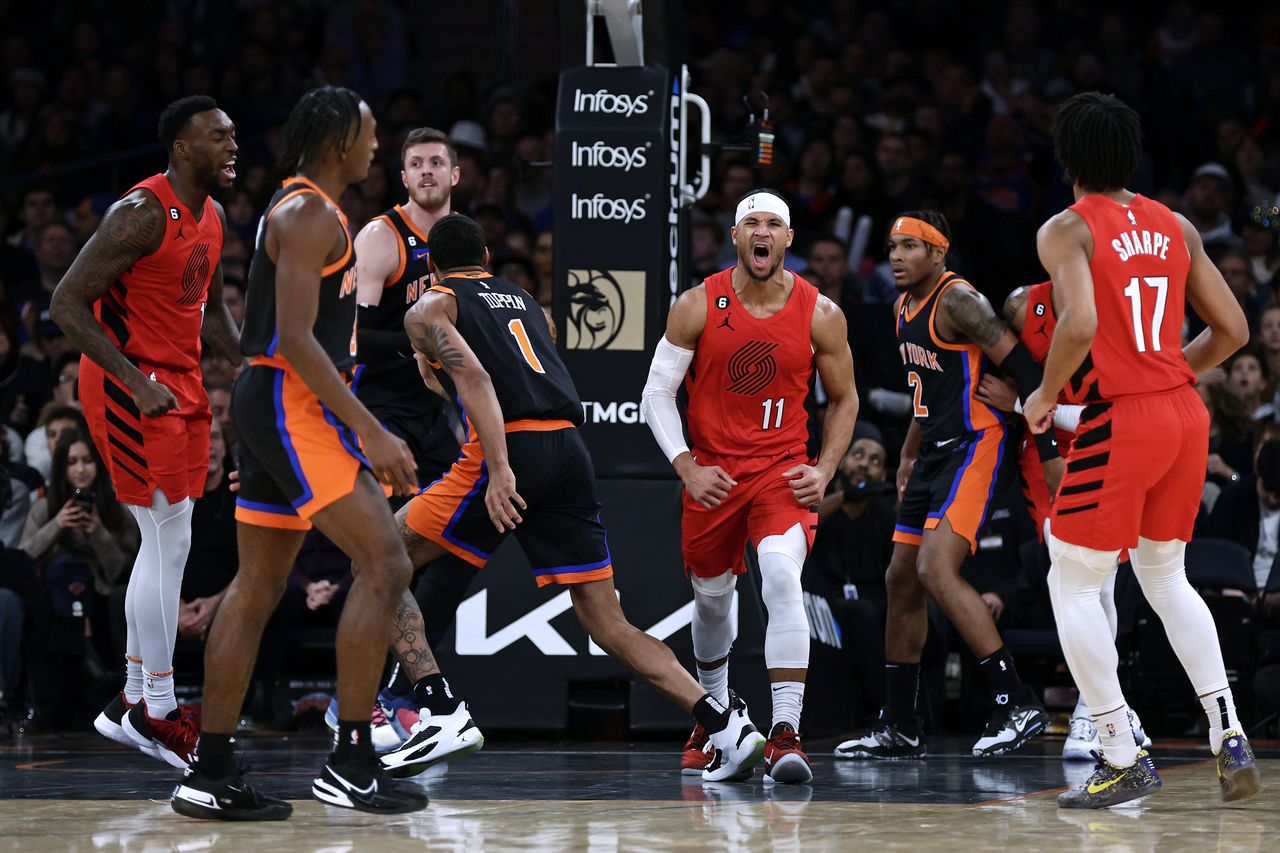 Jerami Grant scored a career-high 44 points and Anfernee Simons added 38 to lead the Portland Trail Blazers to a 132-129 overtime win over the New York Knicks on Friday night at Madison Square Garden.

The Blazers overcame trailing by as much as 14 and shooting just 31.3% on threes to snap a four-game losing streak with the final game of their four-game trip to come Sunday afternoon at Brooklyn.

Grant, who had 25 points at halftime, set a franchise record for free-throw attempts in a game while making 21 of 28. He also went 10 of 20 from the field.

“I’m really disappointed in Jerami,” Blazers coach Chauncey Billups jokingly told reporters after the game. “He had a chance to get 50 in the Garden and he missed all those free throws.”

“(Grant) and Ant really had it going all night,” Billups said. “But Jerami, all night, was aggressive.”

Jusuf Nurkic scored 20 points with eight rebounds and seven assists. Josh Hart had a career-high 19 rebounds, six offensive, to go along with 10 points. He fouled out in overtime.

Nurkic joked after the game that he had accused Hart of stealing his rebounds. Nurkic told reporters that he told Hart, “‘If you don’t get 20, we ain’t talking.’ He didn’t get 20. But I’m happy for him.”

Jalen Brunson led the Knicks with 32 points and Julius Randle scored 23. The Knicks, one of the worst three-point shooting teams in the NBA, made only 13 of 41 threes (31.7%).

“We made a concerted effort to, don’t match their intensity, exceed it,” Billups said. “And our guys did that.”

The Blazers (11-8) were desperately in need of a victory after losing six of their previous seven games. This win assures that they will return home from this trip above .500. Also with the win, the Blazers moved into a three-way tie for third place in the Western Conference.

IT WAS OVER WHEN

Simons made a three with 2:08 remaining in overtime to give the Blazers a 127-119 lead. From that point on, there was a lot of fouling and free throw shooting until the Knicks trailed just 129-127 with 14 seconds on the clock. The Blazers fouled Grant, who made both free throws to push the Blazers’ lead to 131-127. Next, Brunson missed a three and that led to Justise Winslow being fouled and making a free throw to make it 132-127 with six seconds to go.

Turnovers have been an issue for the Blazers this season, but they committed just two in the first half on Friday before finishing with 13, with six coming in the third quarter. But the Blazers committed just three in the fourth quarter and one in overtime.

Fewer turnovers led to a better performance in the halfcourt, resulting in 24 assists, with seven from Nurkic.

“We’ve got to learn how to play more with that type of action,” Nurkic told reporters. “We’re going to be in good shape when we don’t turn it over. Hopefully we learn from that.”

In their move to bury an investigation into the Beirut port blast, Lebanon’s ruling elite have driven another nail in the coffin of the...
Read more
Load more
Facebook
Instagram
LinkedIn
Pinterest
Tumblr
Twitter