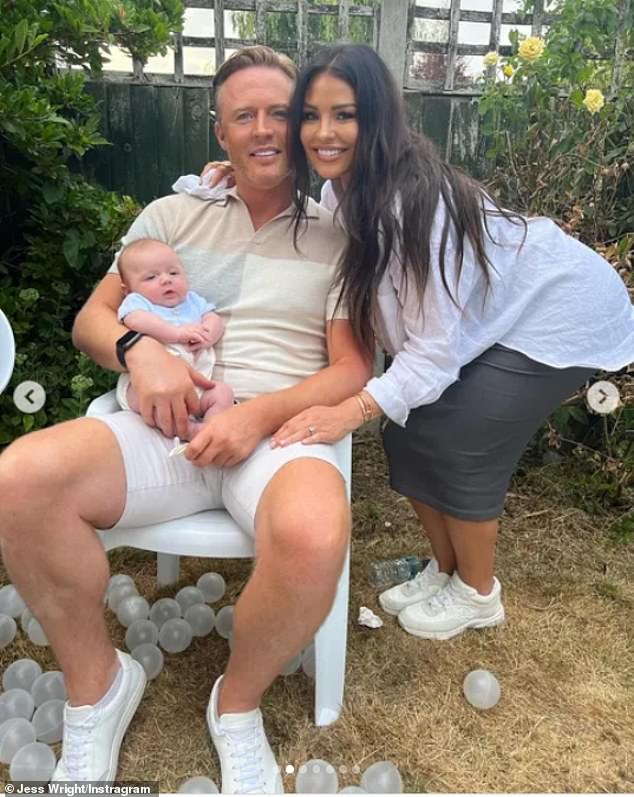 She recently detailed her battle with postnatal depression.

And Jess Wright shared a sweet family snap with her with husband William Lee-Kemp, 39, and baby son Presley to her Instagram account.

The former TOWIE star, 36, also included a picture of her and her nine-week-old son alone while also a posting a single portrait of the smiling toddler while attending a child’s birthday party.

Cute: Jess Wright looked every inch the doting mother on Sunday as she shared a sweet family snap with her with husband William Lee-Kemp and baby son Presley to her Instagram account

The new mum nailed summer chic wearing a grey dress and was causally clad in a white shirt.

Her brunette blonde locks were styled in a brushed out wave as they naturally fell to her shoulders, while Jess sported a dewy palette of makeup.

Financial specialist William also opted for a laid back look wearing a pair of shorts and polo shirt.

Captioning her social media post the TV favourite wrote: ‘Not long & he’ll be on that bouncing castle. lovely day for our gorgeous George’s 1st birthday. They grow up too quickly.’ 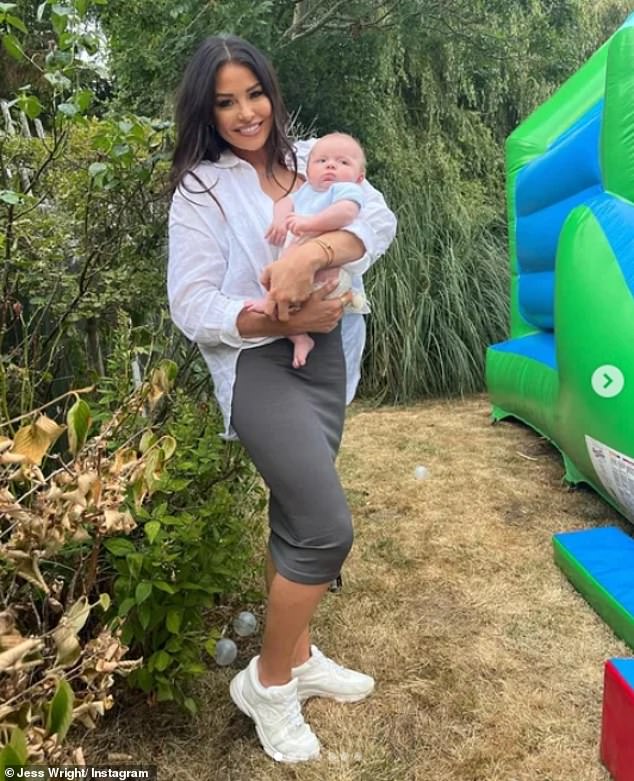 Radiant: The new mum nailed a summer chic look wearing a grey dress and was causally clad in a white shirt

The outing comes a week after Jess candidly spoke about her mental health after welcoming her son in May.

Jess revealed at one point it got so bad that her husband found her collapsed at home crying, saying: ‘I don’t want to be here.’

In an interview with The Sun on Sunday’s Fabulous Magazine, she said: ‘Nothing can prepare you for motherhood.

‘I knew it was going to be tough, but unless you’re living it 24/7, no one can describe it… it’s a rollercoaster. It’s not all rainbows and magic – it’s f**king tough. 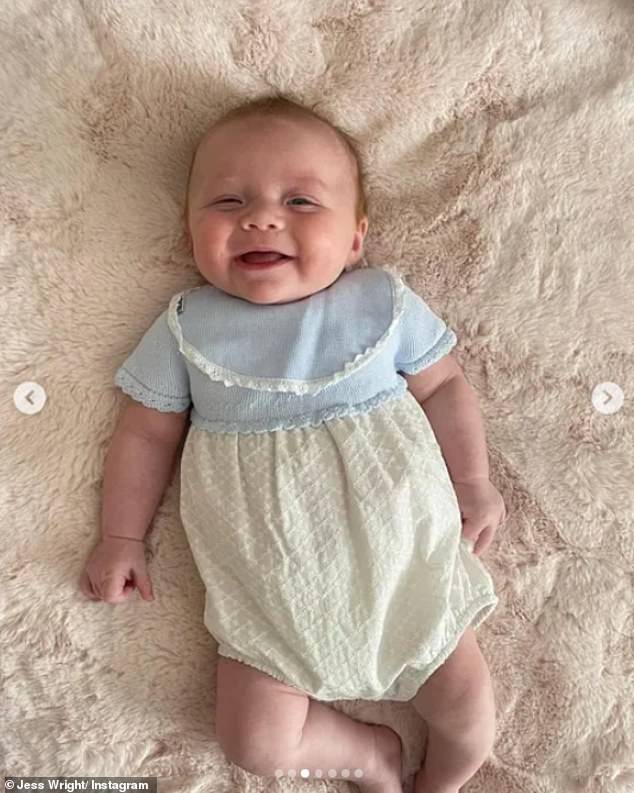 Adorable: The former TOWIE star, 36, also shared a single portrait of the smiling toddler in a romper

‘It’s the reality of looking after another human being and wanting the best for that child in every single way – and judging yourself.’

Jess has spoken out about her own mental health struggles in the hope she can help other mums in her position and show that you can come through it.

The reality star admitted she found it hard to adjust to motherhood and didn’t want to be judged for doing things wrong. 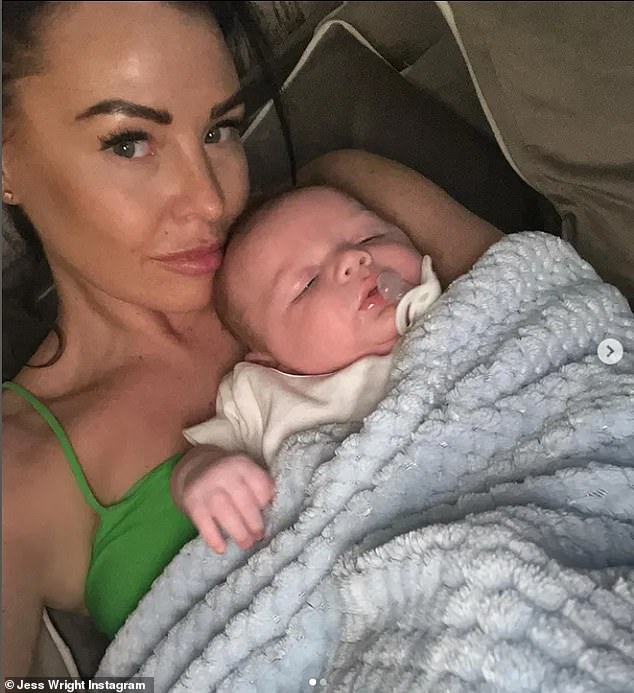 Honest: Jess has spoken out about her own mental health struggles in the hope she can help other mums in her position and show that you can come through it

She praised her partner Will for being supportive during the first month and once her family realised something wasn’t right, she sought medical help.

Jess previously took to Instagram to detail the ‘tough’ tribulations of being a working mother.

Sharing a snap of her and Presley, the reality star wrote: ‘Going between work and being the best mummy you can be is so tough… I want to work and do what I love but I also have mum guilt the minute I’m away from him. 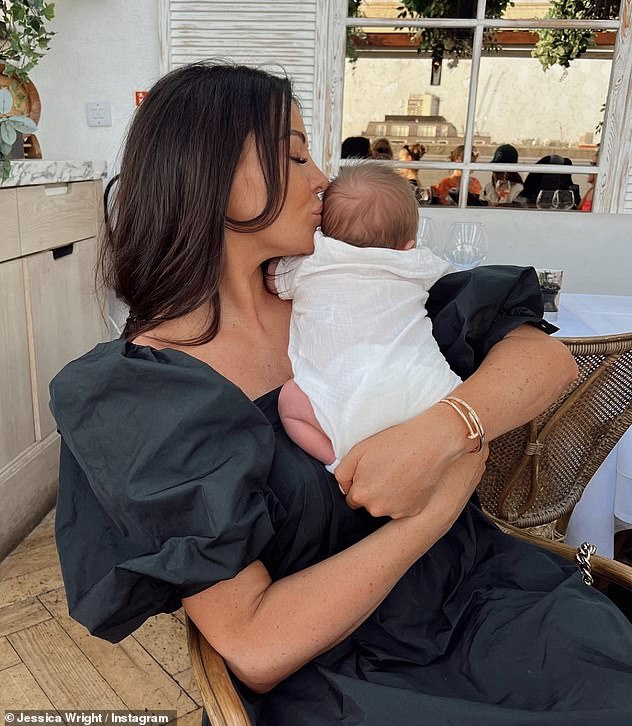 Adjustment period: The outing comes a week after Jess candidly spoke about her mental health after welcoming her nine-week-old son in May

Since giving birth, the reality star has spoken candidly as she navigates through motherhood, explaining in June: ‘No one can really prepare you can they. As many times as you hear this and that, until you’re going through it.’

Jess gave birth to Presley on May 17, less than a year after she married Will in Mallorca in September 2021.

She shared the happy news on her social media page with an adorable snap of the newborn, writing: ‘We will hold your hand forever 17~05~22.’

Jess previously revealed she was ‘totally and utterly overwhelmed’ after finding out she was expecting a baby. 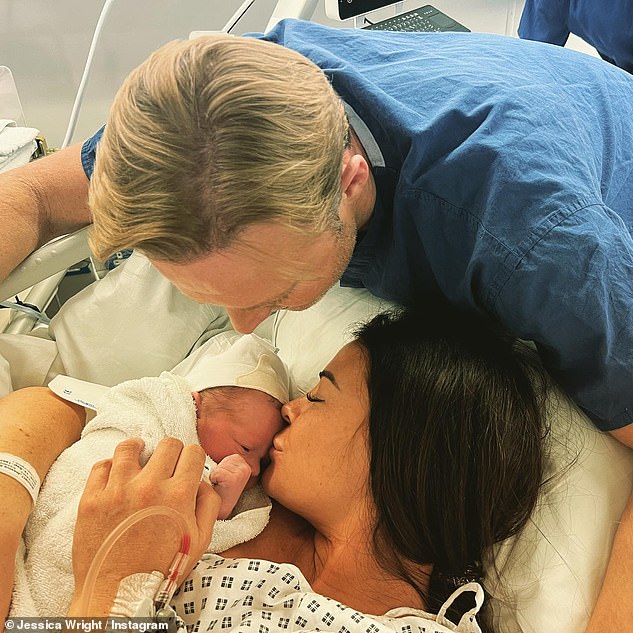 Happy news: Jess gave birth to Presley on May 17, less than a year after she married Will in Mallorca in September 2021

She wrote on Instagram: ‘Pregnancy – It certainly is a rollercoaster & that’s the best way to describe it! I’m scared, excited, grateful, vulnerable & quite frankly totally & utterly overwhelmed at not even knowing what to expect!

‘I also wanted to acknowledge the following, since announcing that we are expecting our baby. My heart goes out to anyone that this was a trigger for.

‘In the past few years my world has been opened up to the realm of fertility & all the struggles that can come with it.

‘Be it, close friends or friends of friends etc, I have seen the struggles to conceive, the sad loss of babies & a whole world really that consumes your every day as a woman.

‘I am eternally grateful as I have already said for this blessing, & I want to make it clear we do not take it for granted & also send huge love to any ladies, & men out there that have not had an easy ride, as I know there are so so many of you.’

She added: ‘I still spend every day hoping this baby is fine & that we will be ok & even then that my baby is healthy & lives a full life, I promise it’s never ending!

If you have been affected by this story please contact Birth Trauma Association at birthtraumaassociation.org.uk 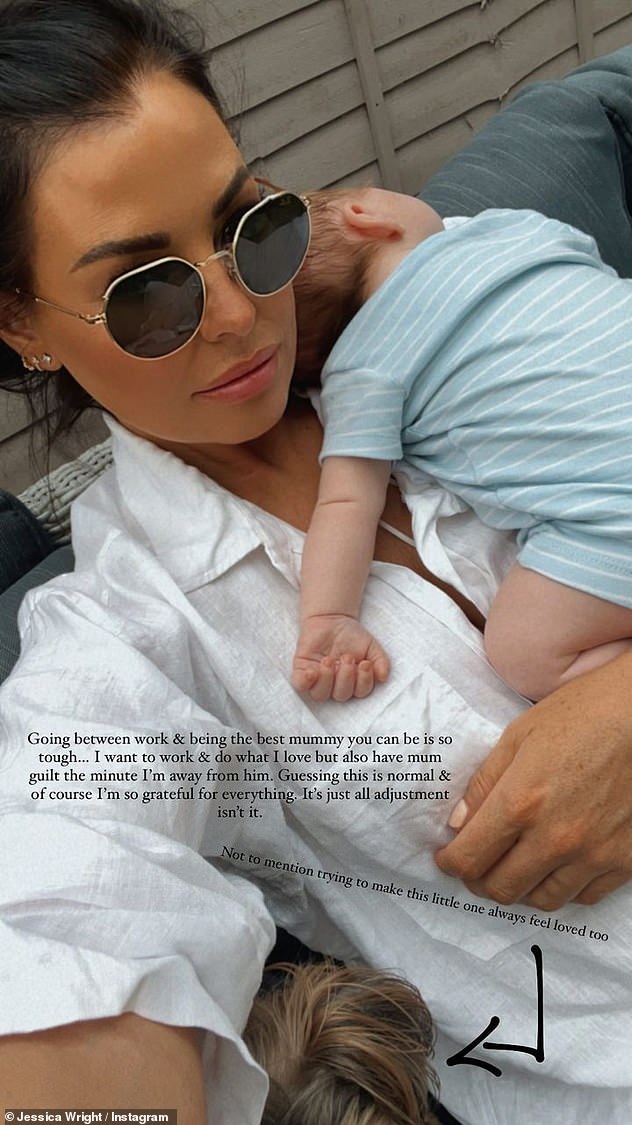 ‘Guilt’: Jess previously detailed the ‘tough’ tribulations of being a working mother