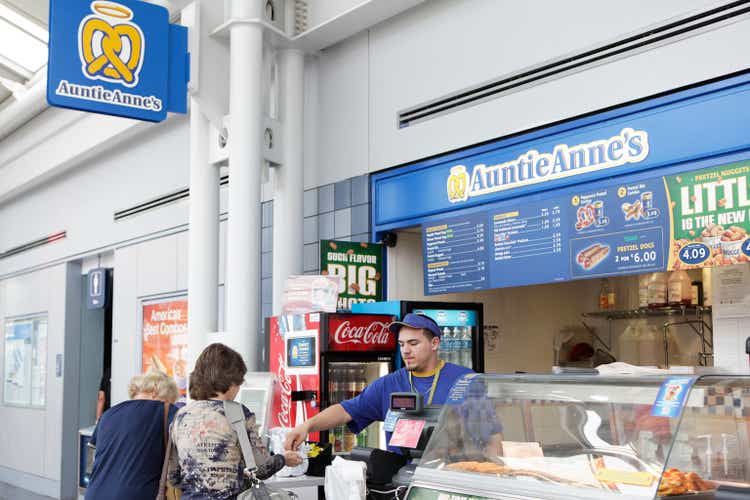 I don’t know about you, but nothing beats a good snack, especially when you’re hungry. One company that’s dedicated to providing snack foods to its customers is J&J Snack Foods (NASDAQ:JJSF). In recent years, the financial picture for the company has been rather mixed. Although sales have been rising consistently if you ignore the downturn from the COVID-19 pandemic, and profitability has followed a similar trajectory, recent performance has been somewhat disappointing on the bottom line. This would all be fine if shares of the enterprise were trading on the cheap. But in most respects, the stock actually looks rather pricey. Add on top of this the fact that current economic conditions are not looking great, and I would make the case that the company will probably underperform the broader market for the foreseeable future. As a result, that has led me to rate the enterprise a ‘sell’ for now.

The company’s operations fall under three key segments. The first of these is the Food Service segment, which focuses on the production and sale of its soft pretzels, frozen novelties, churros, handheld products, and baked goods to the food service segment of customers. This segment includes, but is not limited to, malls and shopping centers, discount stores, fast food and casual dining restaurants, warehouse club stores, schools, colleges, and many other types of institutions. Last year, this segment accounted for 63.3% of the company’s revenue and for 55% of its profits. Next, we have the Retail Supermarkets segment, which sells the pretzels, frozen novelties, and other related products that the company provides to your traditional supermarkets. 16.2% of its revenue and 36.4% of its profits came from this segment last year. And finally, we have the Frozen Beverages segment, which is responsible for selling frozen beverages to the food service industry. This unit accounted for 20.5% of revenue last year but for only 8.6% of the company’s profits.

In the years leading up to the COVID-19 pandemic, J&J Snack Foods was successful in consistently growing its revenue. Sales increased from $1.08 billion in 2017 to $1.19 billion in 2019. When the pandemic hit, sales plummeted to $1.02 billion. But since then, the company has staged a nice recovery, with revenue during the 2021 fiscal year coming in at $1.14 billion. Strength on the top line has continued in the current fiscal year, with revenue in the first three quarters of 2022 coming in at $980.2 million. That represents a significant improvement over the $821.5 million in revenue generated the same time one year earlier. The company benefited from strength across multiple product categories in the 2022 fiscal year so far. For instance, under the firm’s Food Service operations, sales increased by 17%, driven largely by a 24% rise in soft pretzel sales and by a 35% increase associated with the sale of churros. Retail Supermarkets sales increased by a more modest 6%, thanks largely to a 7% rise in soft pretzel sales and a 10% increase associated with the sale of frozen novelties. Meanwhile, Frozen Beverages revenue for the company shot up by 39% year-over-year, thanks to strong demand from theaters, amusement parks, convenience stores, restaurants, and other related parties. The company also benefited from a 23% increase during this time frame in machine revenue and by a 10% rise in service revenue, both related to the actual machines and services said machines require for the company’s frozen beverages.

On the bottom line, the company has been a bit volatile over the years. Net income has shown no real trend, instead sticking around in a range of between $18.3 million and $103.6 million. Operating cash flow has been a little better in terms of the trend it followed. But it’s only when you adjust for changes in working capital that a real trend becomes apparent. Using this metric, we saw an increase from $133.3 million in 2017 to $158.1 million in 2019. The metric then fell to $85.8 million in 2020 before rising back up some to $106.4 million last year. And over that same window of time, EBITDA has followed a similar trajectory, bottoming out at $90.4 million in 2020 before popping back up to $128 million in 2021.

On the bottom line for the 2022 fiscal year, the company has not exactly fared particularly well. This can be chalked up to inflationary pressures the company had to deal with. Net income, for instance, fell from $36.7 million in the first nine months of the 2021 fiscal year to $29.9 million the same time this year. Operating cash flow went from $73.6 million to negative $29.6 million. If we adjust for changes in working capital, the picture would have been far better, dropping more modestly from $76.9 million to $71.5 million. And finally, EBITDA for the company dropped from $89.5 million to $84 million. It is worth noting that, in the first 12 months following the completion of the company’s acquisition of Dippin’ Dots that occurred on June 20th, management is forecasting earnings to rise because of the deal by between $0.30 and $0.40 per share. Unfortunately, we don’t really have any other guidance besides that when it comes to earnings or other measures of profitability.

If we were to annualize results experienced so far for the 2022 fiscal year, we would get income of $45.3 million, adjusted operating cash flow of $98.9 million, and EBITDA of $120.1 million. It’s difficult to know the full impact of the aforementioned Dippin’ Dots transaction. But if we take midpoint guidance for the company for the benefit this transaction should bring, assume the company used all debt to pay for the purchase, and that the debt had a 5% annual interest rate, then the net income for the firm, on a pro forma basis, would be $52 million. The adjusted operating cash flow would be $105.6 million, and the EBITDA would come in at $137.9 million. In the chart above, you can see how the company is priced using data from both 2022 and 2021, with the 2022 fiscal year also showing the adjustment for the acquisition. That’s part of my analysis, but I also compared the company to five similar firms. On a price-to-earnings basis, these companies range from a low of 20.9 to a high of 133.9. Even using the pro forma numbers to account for the acquisition, four of the five companies were cheaper than J&J Snack Foods. On a price to operating cash flow basis, the range was between 7.1 and 58.4. In this case, three of the five companies were cheaper than our prospect. And when it comes to the EV to EBITDA approach, the range was between 11.2 and 26.7, with four of the five being cheaper.

Operationally speaking, J&J Snack Foods seems to be a fairly solid company that’s going through a bit of a rough patch. That’s to be expected in the current economic environment. Having said that, shares do look rather pricey at this moment and that even assumes that management is correct about their aforementioned acquisition. Because of the pricing and because it’s unclear exactly what impact broader economic conditions might have on the business, I have decided to rate the business a ‘sell’ for now.