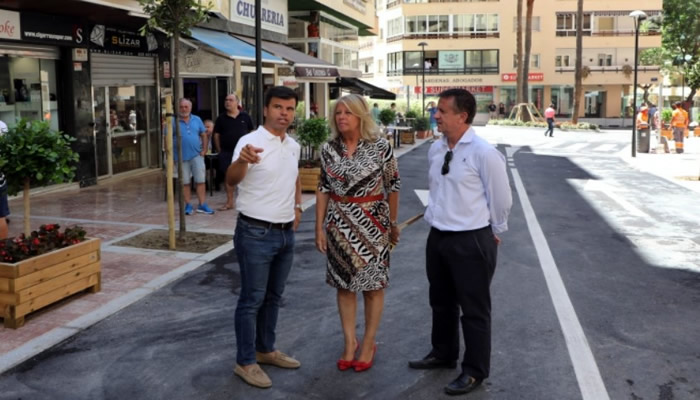 On Thursday, July 28, Marbella Council announced the completion of the first phase of remodelling works being carried out on Calle Nuestra Señora de Gracia. This has renewed the section of road between Avenida Ricardo Soriano and Alonso de Bazan.

A new, modern image has been presented, as well as better infrastructure and public services. Angeles Muñoz, the mayor of this Malaga city visited the newly finished road, which has already been opened to traffic.

“There have been very difficult months of work, but it was necessary to carry out this refurbishment, to solve flooding problems, among other issues. A second phase follows that is scheduled to conclude in August, to adapt it to the current needs of the city and its residents”.

Ms Muñoz detailed that the actions, which are part of a project that exceeds €2 million – and entails the simultaneous execution of this street together with that of Virgen del Pilar – are co-financed 80 per cent by the Fund of Regional Development (FEDER).

This is being done within the framework of the Multiregional Operational Program 2014-2020, an action that is part of the operations of the EDUSI Strategy, Marbella Model of Sustainable City.

The mayor thanked the residents and local merchants for their patience with the inconvenience caused by the work throughout its execution. She stressed though that: “it was necessary to intervene to solve flooding problems and to build a street in accordance with that ‘Central Plan’, that determines a more fluid traffic, where the pedestrian prevails over road traffic and that are very urban roads”.

“Hence the treatment and the width of the pavements that have been undertaken, together with other actions that have meant the change of the entire supply network. This included sanitation, the realisation of a new communications system incorporating new technologies that did not exist previously, and new lighting and street furniture”, the mayor highlighted.

“Taking into account the criteria of the Works and Traffic delegations, there will now be a double flow, and, in addition, with the possibility of turning on both sides, so that one of the main arteries of Marbella could have greater flexibility in terms of traffic”.

Diego Lopez, the Councilor for Works, who attended the event together with Remedios Bocanegra, the councillor of the Western District, specified that: “This is the first section of Calle Nuestra Señora de Gracia; the second, which is the one with the longest execution period, will be completed and open to traffic in the month of August”.