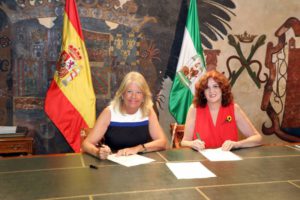 MARBELLA Council continues to support Bancosol and Cudeca and the programmes that both entities carry out in the city which benefit more than 3,600 people in the municipality.

Bancosol which runs food banks throughout the Costa del Sol will receive €57,000 and commenting on this on July 31, Marbella Mayor Ángeles Muñoz said “We are backing one of the most supportive entities, which has been working in our municipality for more than a decade so that no family is left without basic resources.”

The president of Bancosol, (which in the last year helped 3,500 people in Marbella and distributed a total of 170,000 kilograms of food) Diego Vázquez thanked the City Council for its support with the signing of this new agreement.

The Cudeca Foundation in Benalmadena which offers palliative care to cancer sufferers and their families received €20,000 and according to the mayor, this sum “will serve to cover part of the expenses of the association, which are added to other forms of financing such as the two stores that it has in the city, in Marbella and San Pedro Alcantara, managed by their own volunteers”.

Medical director of Cudeca, Marisa Martín, said “We feel very loved and supported in Marbella, where we have two stores and a hundred volunteers, also serving a hundred people through our programs and activities, aimed at both cancer patients and those with other advanced-stage diseases and their families.”

Thank you for reading ‘Marbella Council continues to support Bancosol and Cudeca’ and remember that all articles produced by Euro Weekly News may be accessed free of charge.

By Michileen Martin | Published 5 mins ago This week is starting to look very “Boromir’s last stand” for Sean Bean, though in this...
Read more
Europe