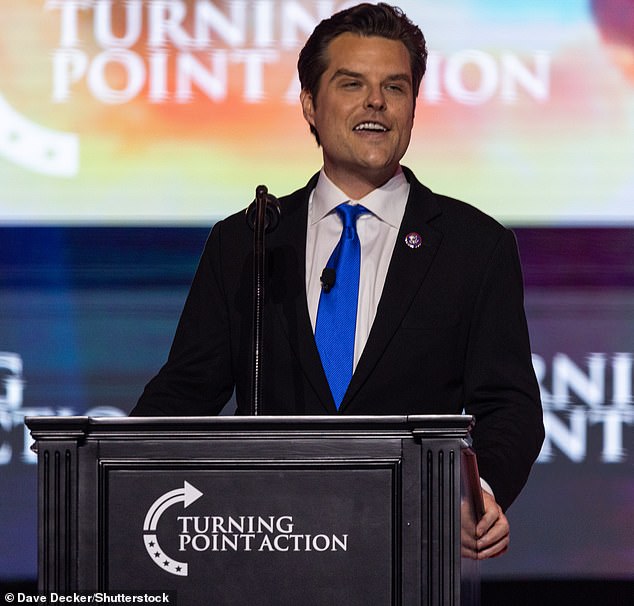 Florida Republican Rep. Matt Gaetz told Roger Stone that ‘the boss’ Donald Trump would pardon him if the longtime GOP operative was convicted in his 2019 trial for obstructing a Congressional investigation, according to newly-revealed audio.

Stone was eventually found guilty and pardoned by the former president.

But weeks before the trial, Gaetz told Stone backstage during an event at one of Trump’s golf courses that he would not ‘do a day’ in prison, having heard from the ex-president ‘directly’ about his affinity for his longtime ally.

‘The boss still has a very favorable view of you,’ Gaetz said according to the Washington Post. ‘I don’t think the big guy can let you go down for this.’

Stone remarked that Trump sent him that message ‘from time to time.’

The comments were caught by a microphone on Stone’s lapel as he was being filmed for the feature-length documentary ‘A Storm Foretold,’ to be released later this year.

They were among the speakers at AMPFest, a right-wing event hosted at Trump’s National Doral golf club in Florida in 2019.

Gaetz, who was and remains one of Trump’s most vocal allies in Congress, was also caught in the recording claiming that the then-president ‘berated’ him at a Christmas party over the Florida lawmaker considering a departure from Capitol Hill.

He is currently facing a federal sex trafficking investigation, revealed earlier this year, over alleged relations with an underaged girl.

Gaetz said of Trump, ‘He had heard a rumor that I was maybe not going to run for reelection, and at the Christmas party, he berated me in front of my date. Like, straight berated me.’ 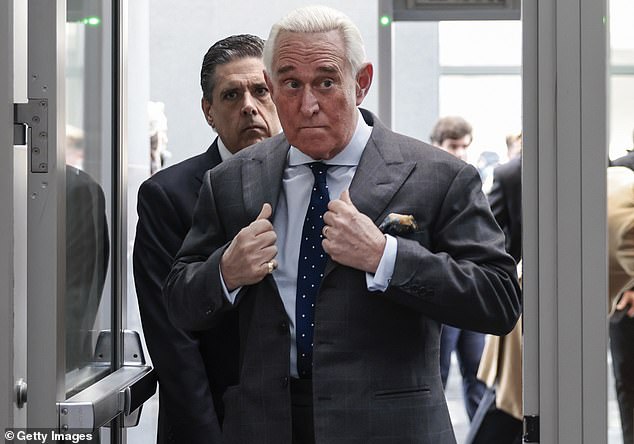 He was recorded assuring longtime Republican operative Roger Stone that Trump would pardon him if he was found guilty, which Stone eventually was

AMPFest host and conservative commentator Benny Johnson reportedly told Gaetz it was a ‘net positive’ to be accosted by the president in front of a date.

In a snippet of the recording released publicly by the Post, Stone can be heard telling Gaetz of his criminal charge that he would ‘fight it right to the bitter end.’

Gaetz replied, ‘Yeah, but I don’t think you’re going to go down at all at the end of the day.’

Stone noted that his trial was three weeks away.

He continued, ‘I may have to appeal to the big man.’

‘It’s the District of Columbia. We surveyed 120 jurors. Ninety of them know who I am, and they hate my guts,’ Stone complained.

Stone was among the highest profile people to be ensnared in Special Counsel Robert Mueller’s probe of Russian interference in the 2016 election.

While other former Trump allies distanced themselves from the then-president in the midst of the investigation, Stone remained defiant and insisted he would not testify against the commander-in-chief. 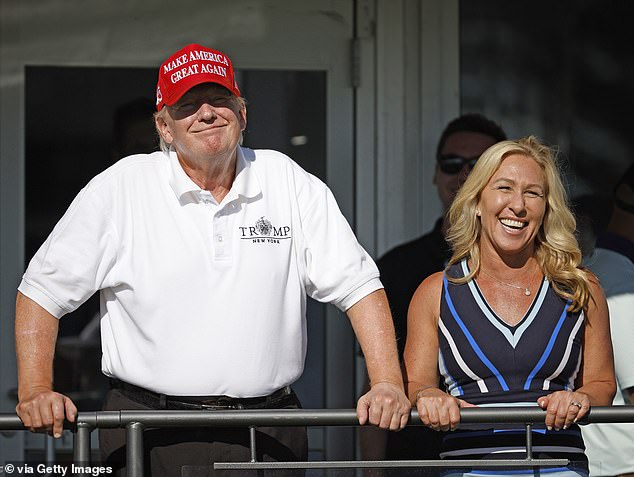 In return Trump propped Stone up as ‘very brave’ and other public praise even as he attacked those critical of him.

Stone told Gaetz at AMPFest, ‘It would have been easy to make this go away, but I couldn’t live with myself.’

At the time, the House Judiciary Committee – of which Gaetz is a part – had been investigating whether Trump was obstructing justice by publicly touting pardons for Stone and disgraced former general Michael Flynn.

In a reaction to the Post, Gaetz contended that his certainty of Stone’s fate was similar to public comments he made at the time.

The congressman also claimed the entire recording was illegal because of Florida’s laws on consent before taping conversations.

‘There is nothing illegal about this recording,’ filmmaker Christoffer Guldbrandsen contended, pointing to Gaetz stopping short of discussing his work lobbying for a pardon on Stone’s behalf.

Gaetz told Stone in the recording: ‘Since there are many, many recording devices around right now, I do not feel in a position to speak freely about the work I’ve already done on that subject.’

Trump had repeatedly denounced Mueller’s investigation as a ‘witch hunt’ and a ‘hoax.’

It remains at the top of his mind even now, with the former president bringing up the probe at multiple recent public appearances.