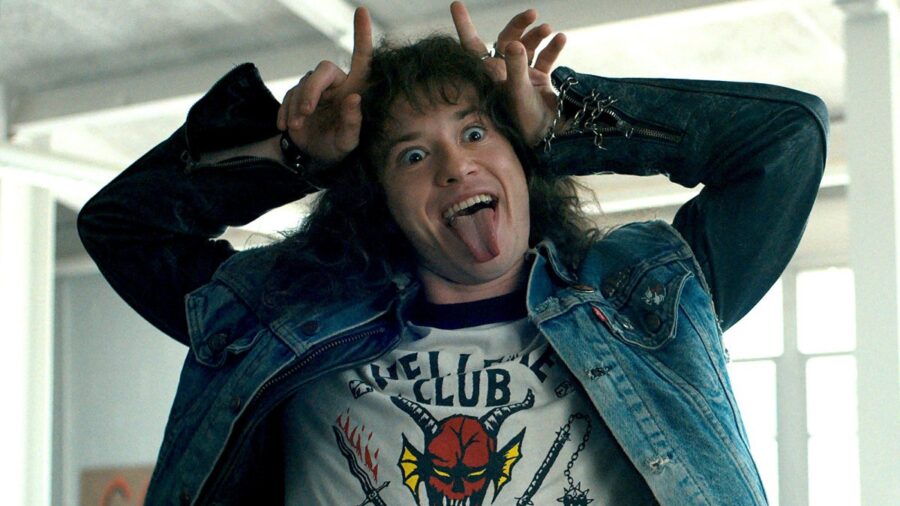 By James Brizuela
| Published 5 mins ago

In the same way that Kate Bush exploded in popularity from her song “Running Up That Hill (A Deal With God” Metallica has also received a massive amount of attention for their song, “Master of Puppets.” The difference is the heavy metal act has been popular for quite some time. No offense to Kate Bush, but she hasn’t been pumping out radio hits like Metallica. Now, Metallica has teamed up with Stranger Things in a much bigger way, as they showed Eddie Munson playing alongside them during their performance at Lollapalooza. You can see the video below:

Metallica is rocking out to “Master of Puppets” on stage as the video of Eddie Munson doing the same in Stranger Things is being played behind them. Again, the heavy metal act has not needed that kind of exposure as they have been steadily popular since the 1980s, but it is pretty great that they are giving Eddie Munson and the series the credit it deserves. Stranger Things crossed 1 billion viewership hours earlier this month, so we can imagine Metallica has seen some good dividends from their 1980s hit being streamed a ton more as a result of the popularity of the show.

For those who have not seen Stranger Things Season 4, the rest of this article has massive spoilers. Stranger Things Season 4 saw the addition of a character named Eddie Munson, who became the Dungeon Master of the Hellfire Club. A group dedicated to playing the tabletop game, Dungeons & Dragons. Eddie and Dustin formed quite a great relationship with one another. Towards the end of the season, when the kids entered the upside-down to battle villain Vecna, Dustin and Eddie were meant to draw away the vicious bats that protected Vecna’s lair. Eddie did this by playing “Master of Puppets” on some impressive equipment to get the bats to come his way. Sadly, this led to Eddie giving his life to save Dustin and the rest of the kids of Hawkins. Now, Metallica and Stranger Things are cemented together.

Metallica has shown its support of Stranger Things in many ways. They have been seen wearing the Hellfire Club shirts from the series, they met Joseph Quinn and jammed with him, and now they are showing the video of his character Eddie Munson playing the song alongside them while they perform it live. We can imagine that that level of popularity was something that Quinn had not imagined getting when he suited up as the metal-loving Dungeon Master of Hawkins.

Stranger Things Season 4 is streaming right now, and fans can see this epic moment with Metallica right now. The newest season was lengthier, as things for Hawkins and the kids that have saved the world many times over got that much more interesting. We were treated to a much darker outlook on things, as Vecna did what he could to stop Eleven and her compatriots. However, the newest season has come with the best writing that the Duffer Brothers have done thus far. Check it out on Netflix right now.