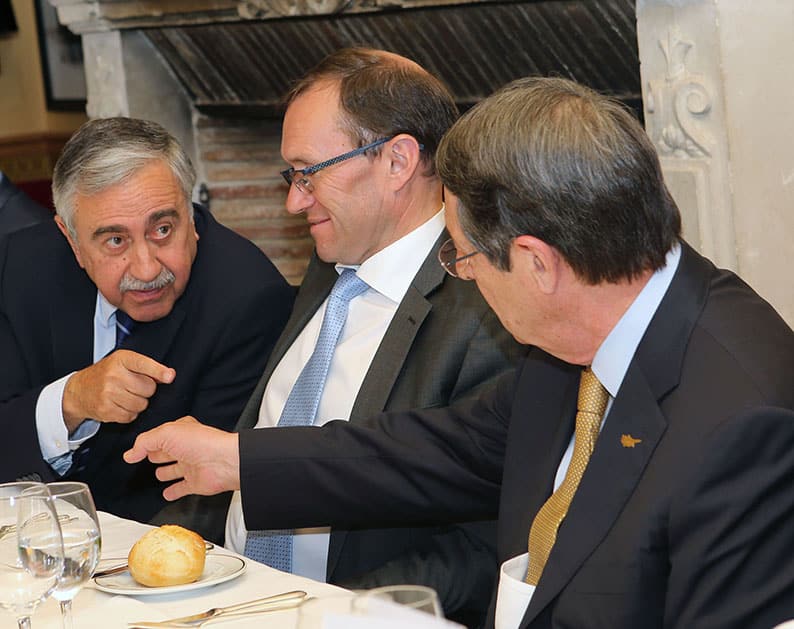 The so-called ‘missing minutes’ of a meeting on July 4, 2017 during Cyprus talks in Crans-Montana were published on Sunday by Pheleleftheros, further muddying what happened during the failed negotiations.

The talks collapsed in the early hours of July 7 that year and the recriminations of the past five years have resurfaced due to the presidential elections next year, given that two of the protagonists are now candidates for the top job.

According to what was published on Sunday, there was a meeting at 4pm on July 4 to clarify what is known as the Guterres framework for a settlement. The minutes reveal that there was also a meeting at 10am that day between the two leaders, President Nicos Anastasiades and former Turkish Cypriot leader Mustafa Akinci and the UN’s then Special Envoy for Cyprus Espen Barth Eide.

The minutes of the 4pm meeting directly refer to the earlier one saying it contained “the exact wording” of clarifications to the Guterres framework as were used in the morning meeting.

Initially UN Secretary-General Antonio Guterres had on June 30, given the leaders his six-point framework.

The July 4 meeting was to clarify some points after Eide spoke twice with Guterres.
Anastasiades has repeatedly said that the July 4 meeting was the one the framework that should be counted, not the informal one of June 30. He claimed that minutes were kept for that crucial meeting, but that they had somehow vanished.

According to the government, without these minutes the Guterres framework could not be included in the terms of reference for the negotiations, and without the framework there could be no resumption of talks.

He even asked the Secretary-General’s personal envoy, Jane Holl Lute at a later date to to track them down when she was attempting to bring the two sides back together for new talks.

The significance of the minutes lies in this: the Turkish Cypriot side contends that if the Greek Cypriots accept the Guterres framework without changes, it could be announced as a strategic package agreement.

But Anastasiades insisted the June 30 framework submitted by Guterres has been superseded by the one of July 4, which he said was the only valid one. However, with the minutes of the July 4 meeting nowhere to be found, there was no reference point to continue the talks.

Some commentators have seen the fuss over the minutes as mere shadow play by Anastasiades, given that UN sources confirmed that during the July 4 meeting no substantive changes were made to the initial Guterres framework.

This suggests that whether the minutes exist or not was irrelevant, and Anastasiades was suspected of inventing pretexts to stay away from the negotiating table.

Phileleftheros suggested that not only was Jane Holl Lute later denied access to the minutes, which had caused an uproar, but also that Akinci had publicly lied about there being another meeting on the morning of July 4.

According to what it published, in the June 30 informal paper containing the framework Guterres had underlined that he did not think that a system in which the right of intervention by the guarantor powers would be sustainable.

He said issues related to the guarantees could be replaced by satisfactory control and monitoring mechanisms that the two sides could mutually agree on.

In some of these matters the guarantor powers could intervene, according to the report because the system should ensure that both communities in Cyprus would feel safe in a reunified Cyprus, where the security of one community would not create insecurity in the other.

According to the July 4 clarifications, which appeared to merely expand on the informal framework, Guterres said a new security system was needed for Cyprus that would not be a continuation of the old one.
This would mean ending the unilateral right of intervention of the guarantor powers and the Treaty of Guarantee of 1960 in general.

The new system would be based on a stable system of safeguards, through which Cyprus and all Cypriots of both communities would feel safe through strong enforcement mechanisms and monitoring the solution.

These mechanisms would also include external actors such as the United Nations, friendly countries and other international and multilateral organisations. The guarantor powers of 1960 could not by themselves implement and monitor the solution, the document reportedly says.

On security, it said existing troops should be drastically reduced from the first day of the implementation of the solution and gradually reach the number of 950 for Greek soldiers and 650 Turkish soldiers as provided for in the Treaty of Guarantee.

A mechanism would be established monitoring the troop drawdowns.