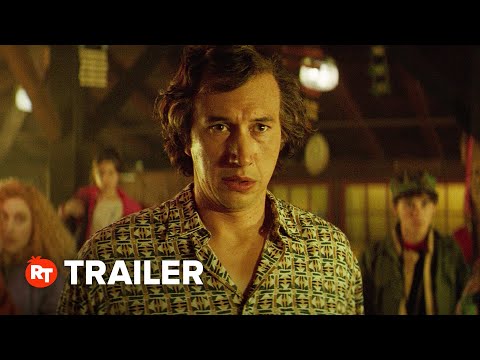 Adapting a work of art into another medium is always going to be a tricky task, especially when that work of art is over four decades old, has garnered a swathe of adoring fans since its release, and is considered by many to be one of the finest examples of a movement. Sadly, Noah Baumbach‘s adaptation of Don DeLillo’s 1985 novel White Noise does not capture the excellence nor the spirit of the original work.

White Noise tells of a university professor (Adam Driver) who has earned something of a ‘rockstar’ status at the fictional college in which he lectures, having pretty much birthed a new line of academic reasoning surrounding the life of Adolf Hitler. However, Professor Jack Gladney uses both his status and his ardent ability for ratiocination to cover the fact that he has a deep-seated fear of death – all the more ironic considering the subject of his expertise, of course.

Jack is not the only member of the Gladney family in stark terror of dying, though, as his wife Babette (Greta Gerwig) also suffers from the affliction that is common to many of us. However, whereas Jack clings to his academic robes (both figuratively and literately) to ease his fear, Babette seeks out the more traditional medicinal route. At the same time, the conventional and utterly-American means of consumerism as a way to escape our inevitable fate also hangs in the air through the narrative.

Jack and Babette are forced to confront their ultimate fear when a train carriage dramatically crashes, releasing a potentially life-threatening toxic chemical over their hometown. An ensuing moral panic follows, with the families of the town being evacuated and quarantined for several days before that tension settles down and life returns to some sort of normality. However, as Jack was exposed to the toxin for longer than most, he, in particular, must face his inevitable mortality and the consequences of Babette’s former actions against her own fear.

Admittedly, there are moments in Baumbach’s film that shine; however, many of these ought to be considered as a given by today’s cinematic standards and the film’s generous budget. The cinematography, lighting and editing in White Noise are exemplary; not a frame is out of place or oddly constructed, even in the film’s frequent frantic moments. So too, are the 1980s set design and costume utterly on point. But as they should be: do not be fooled as to a film’s quality based merely on it looking pretty and being well composed.

In that light, it’s unsurprising to learn that the acting in White Noise is fantastic. I’d been keen to find out which choices Adam Driver had made when portraying a memorable character such as Jack Gladney. He delivers with expertise a sense of awkwardness, anxiety and humour as a defence mechanism and denial of reality. Still, I couldn’t help but feel that he’d picked up several cues from Steve Coogan’s Alan Partridge.

Greta Gerwig and Don Cheadle (Jack’s college associate, Murray) are also in fine form, as are the supporting players – the Gladney family’s younger members. However, as previously stated, with the film’s production, good acting should be a given.

While DeLillo is a humorous writer, he is certainly not a comic, and this is where Baumbach gets his adaptation wrong. Understandably, Baumbach wants his version of Jack to use humour as a means of escaping his fear of death. However, in Baumbach’s version of White Noise, that comedy is all too present, lacking the distinct sense of irony that much of the best American literature of the 1980s exemplified.

In that sense, Baumbach’s White Noise is a confusing mess and persistently unsure of which angle to take on DeLillo’s richly thematic novel. At one point in the film’s first act, we see a switch to genuine horror, which I admittedly became rather excited by. This is a film about fear, after all. However, this sense of excitement was soon diminished by several moments of utterly outdated comedy. One, in particular, saw a Dukes of Hazzard-esque slow-motion everyone-screaming car jump in which White Noise was no longer an exposition on the fear of the inevitable but a cheesy family road trip caper. That element alone is utterly frustrating, given the significant deviation from the source text.

Naturally, Baumbach was forced to omit several parts of the novel in order to squeeze the general narrative into a rather generous but tedious two hours and 16 minutes. Still, the matter of the fact is that we miss out on several fascinating insights into its characters. This certainly concerns Jack’s eldest son Heinrich (played by Sam Nivola). Although Heinrich is indeed given his fair share of the limelight with his unrivalled wit and intelligence, we are not afforded the chance to discover his teenage corporeal anxieties, nor Jack getting irritated by the fact that he plays chess via mail letter with a convicted death row inmate.

As to another of their children, several times throughout the film, both Babette and Jack asked, “Where’s Wilder?” But do we even know who Wilder is? He has about ten seconds of screen time despite him being a rather important part of DeLillo’s narrative. Whilst we’re on Wilder, the biggest frustration, no, anger, no, utter exasperation, with Baumbach’s film is its ending. The final chapter of DeLillo’s novel perfectly states the themes of the work whilst returning the Gladneys to some sort of equilibrium with a still-pervading sense of anxiety. After all, death is something we simply cannot escape, no matter how hard we try to confront it through medication, reason or consumerism.

However, Baumbach’s ending is nothing short of a fucking embarrassment, utterly out of tone with the entire message of DeLillo’s novel. It’s akin to the end of Slumdog Millionaire and perhaps Another Round — hopefully, that should give you some clue as to what happens if you should choose not to watch the film when it comes to Netflix in December.

But where Another Round’s ending was jarring, given the excellent film that preceded it, the finale of White Noise reiterates the point that you’ve just watched an irritating mess of a film that barely garners respectability from its acting and production value. I’d ardently hoped that it would be a false conclusion and we’d be treated to some sort of prologue, but no, the lights came up, and I began to mutter obscenities under my breath.

So the question remains: why make the damn thing at all, Mr. Baumbach? Did you like the book? Is that it? Why not go the extra mile and actually adapt the novel for a contemporary audience? DeLillo’s novel was released during an initial peak of consumer culture and at the height of the Cold War when death was always potentially around the corner. Yet Baumbach’s film feels like an excuse to give Greta Gerwig a 1980s perm and fill a supermarket set full of the products of yesteryear. Undoubtedly, more could be said about our fear of death in the 21st Century, especially given the global events of the past few years.

White Noise shifts and changes too often. I was totally down with the disorienting opening to the film, given the fact that our distortions of what we perceive to be reality (vocation, family, hobbies, purchases, etc.) are what often get in the way of the confrontation of our deepest fears and subsequently, an ability to live an authentic life. But it only represented the film in sum: confused, out of touch, and completely unable to portray the intelligence of the source text succinctly. Quite simply, it shouldn’t have been made.

Guillem Ramisa Musician and poetWorry about doing things with good intentions, because when you're about to slap it, it'll be the only thing you'll...
Read more

In Bamako, Russia reaffirms its alliance with Mali and sees bigger in the Sahel