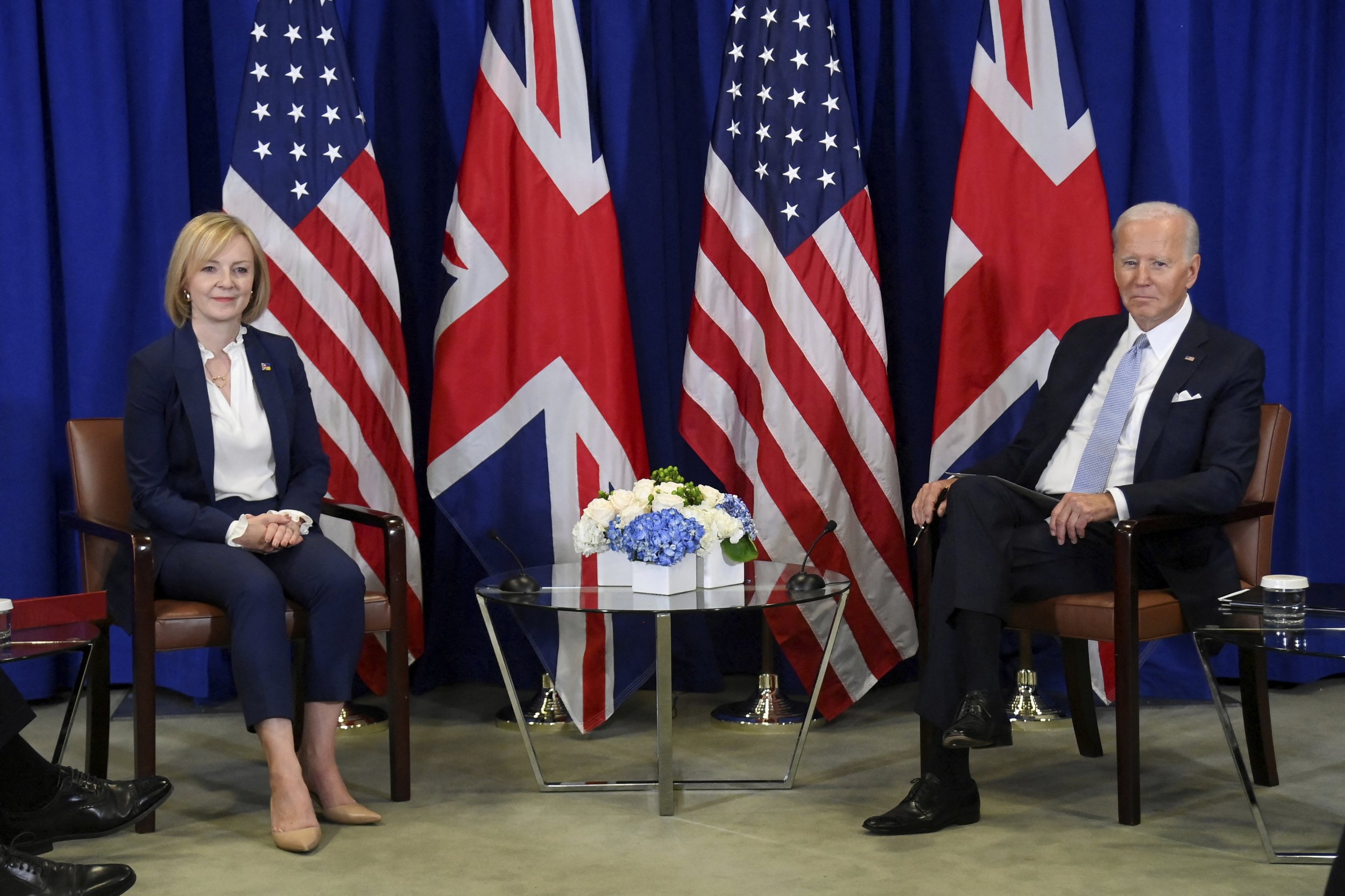 UK officials are looking at a possible deadline to fix the Northern Ireland Protocol impasse in just six months’ time after a meeting between Liz Truss and Joe Biden last night.

London and Washington are viewing the 25th anniversary of the Good Friday Agreement next year as a crucial date to ensure power sharing in Northern Ireland is up and running once again.

This will only happen if the DUP agree to form an Executive with Sinn Fein, having refused to return to Stormont due to disagreements over the implementation of the protocol.

Speaking ahead of their bilateral meeting, Mr Biden told Ms Truss that he was looking forward to hearing what she had to say about the Northern Ireland peace process post-Brexit.

In opening marks at the top of their UN meeting, the US President said: “We are both committed to protecting the Good Friday Agreement of Northern Ireland. And I’m looking forward to hearing what’s on your mind.”

The PM’s spokesman described the 75 minute meeting as “warm” and said the discussion on the protocol was “short”, but both agreed that the “priority must be protecting the Good Friday Agreement and preserving the gains of peace in Northern Ireland”.

UK officials are pencilling in a potential state visit for the US President as he is expected to visit the British Isles to mark the signing of the peace agreement in April next year.

The date next Easter is being viewed in Washington, Dublin and London as a key moment in the diplomatic diary and Downing St believes it presents a prime opportunity to ensure the issues with the Protocol are resolved to allow the Northern Ireland Executive to be restored.

A government source said Downing St and the White House see the anniversary of the peace agreement as “a vital moment” but the “big obstacle” to their plans was the lack of an Executive.

“The 25th anniversary is kind of a key pivot moment, which is Easter next year. If you don’t have an Executive Assembly by then, then that’s pretty bad all round,” the source said.

“It’s an important place in the electoral cycle, for the Biden administration as well, into his second term. So that’s the kind of primary focus which is an absolutely shared focus.”

Former prime minister Tony Blair has been holding talks with US and EU representatives as part of UK efforts to end the deadlock over the protocol, which dictates post-Brexit trading arrangements between Britain and Northern Ireland.

Mr Blair’s involvement is seen as a crucial player given his role in bringing about the peace deal, which was signed in 1998.

A diplomatic source said the former Labour PM has been explaining to both Washington and Brussels that the “British government has a real point on the trading aspects of the Northern Ireland Protocol”.

“He’s been explaining – in a way that only he can given his role in the Good Friday Agreement – why it’s not about the Good Friday Agreement. It’s about communities. And he’s been explaining why the EU’s proposals will not work. He doesn’t agree with the Government on every point, but he certainly has been a helpful voice in that,” the source said.

Share
Facebook
Twitter
Pinterest
WhatsApp
Previous articleAre you a TAP customer? Find out what to do after the attack that left customer data exposed on the dark web – News
Next articleIreland left facing uphill battle to top Nations League group after Scotland secure big win over Ukraine

By Daniela De Lorenzo  Europe’s valuable wine and beer industries are working to retain their competitive edge with an expanded range of aromas and blockchain-based...
Read more
Sports