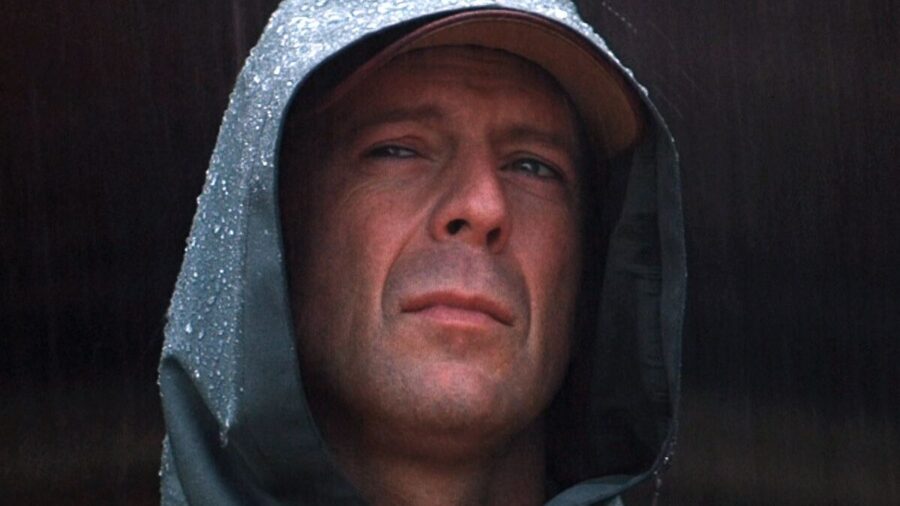 By Michileen Martin
| Published 2 days ago

Unfortunately for all of us, Bruce Willis won’t be showing up on the big screen for many more movies. In March, Willis’ daughter told the world that the actor had been diagnosed with aphasia, which was causing his cognitive abilities to deteriorate. The announcement seemingly confirmed reports that Willis was having issues while filming various projects, including needing an earpiece during scenes to be fed lines and other directions. But before he leaves the spotlight for good, Willis has some flicks on the way including Gasoline Alley. The action thriller enjoyed a limited theatrical release as well as on video on demand. It’s also streaming on Hulu, where it’s making a major dent in the service’s views. It entered the Hulu’s top 10 on July 6 and stayed there for a week, competing with big draws like Machine Gun Kelly’s documentary and Ghosbusters: Afterlife.

Bruce Willis plays Detective Bill Freeman in Gasoline Alley. Freeman and his partner Freddy Vargas (Luke Wilson) are tasked with finding a mass murderer who’s killing sex workers. The deaths wind up not being the result of a serial killer, but of a human trafficking ring orchestrated by tattoo artist Jimmy Jayne (Devon Sawa), who has access to an underground tunnel between Tijuana and San Diego. The conflict between the detectives and Jayne eventually leads to a fiery showdown in a warehouse south of the border.

Judging by Rotten Tomatoes, Gasoline Alley is the movie to watch if you’re looking for some fun, but not if you’re looking for a cinematic masterpiece. It suffers a harsh 29% reviewer’s score, contrasted with a 92% audience score. Some reviewers express pure confusion with the flick, and at least one outright calls it a “turd.” Considering where the Bruce Willis flick comes from, the critical consensus is not a surprise.

Gasoline Alley is one of a long list of films Bruce Willis has made over the past few years with Saban Films. The movies from Saban are usually action and crime thrillers, are often exclusively video on demand offerings, and you’ve probably heard of very few if any of them. They tend to enjoy as much critical acclaim as your average Rob Schneider comedy. Willis has made so many movies with the company that earlier this year — just before the world learned of Willis’s decline in health — the actor was almost “honored” with probably the least desired honor in Hollywood. Willis was given his own special category at the Razzies, “Worst Performance by Bruce Willis in a 2021 Movie.” Out of Death, Deadlock, Cosmic Sin, Fortress, Apex, Midnight in the Switchgrass, American Siege, and Survive the Game all made the cut for the nominations. When the news about Willis’s health came out, the Razzies initially refused to change their decisions, but they eventually caved.

The news of Bruce Willis’s diagnosis and subsequent retirement inspired some touching messages from a number of celebrities who’d worked with the former action superstar. Sylvester Stallone wrote on Instagram “We go back a long way, praying for the best for you and your wonderful family.” The message was accompanied by pictures of the two actors at different events. It’s particularly touching when you consider the two had a very public falling out back in 2013. THR reported Willis was fired from The Expendables 3 after demanding a $1 million pay raise even after being contracted for $3 million for a 4-day shoot. Stallone announced Harrison Ford was replacing Willis on twitter and went on to call Willis “greedy and lazy.” A year later, Stallone took back the insult, saying that he was wrong and that Willis was a “stand up guy.”

Another star who express his love from Bruce Willis was John Travolta. The two worked together on Pulp Fiction and the Look Who’s Talking movies, and apparently a lifelong friendship resulted. Travolta wrote on his Instagram page, “Years later he said to me, ‘John, I just want you to know that when something good happens to you, I feel like it’s happening to me.’ That’s how generous a soul he is. I love you Bruce.” The two friends will once again star together in the upcoming Paradise City.

Maybe the critics are right, maybe they’re full of it. Either way, you can decide for yourself. Gasoline Alley is streaming now on Hulu.