Rasmus Højlund and his wake-up call for Salzburg 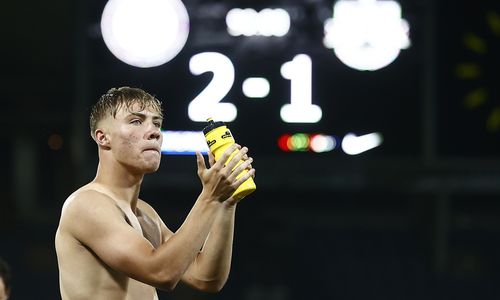 The young Danish goalscorer gives Sturm Graz their next home win over the Ligakroesus. At the best possible time, because Dynamo Kyiv is waiting on Wednesday. “Thinking big never hurts,” says the coach.

Graz. The runner-up stronger than the master? At least that is the situation in the Bundesliga after two rounds and the first direct duel. Storm Graz returned with a deserved 2-1 home win RedBull Salzburg not only made a strong statement, but also fueled self-confidence for the upcoming duel in the third round of the Champions League qualification Dynamo Kyiv. Game one starts on Wednesday in Łódź, Poland.

“The win gives us a lot of motivation,” said defender Gregory Wüthrich. Double goalscorer Rasmus Højlund agreed: “We are on a very good path. I hope that we can also win on Wednesday and get into the play-off.”

Reaching the last round before the group stage is also the goal of the coach Christian Ilzer. “Such victories cost strength in the legs, but also in the mental area. But of course that also gives a broad chest for Wednesday, ”explained the Styrian.

Exuberantly you will not compete against Kyiv. “That would play into the hands of your coach fox (Mircea Lucescu, note),” said the 44-year-old. It is not yet clear which starting XI will be chosen, but the framework is now in place. “A team emerges that can play successfully. But we have a program waiting for us in the next few weeks that will require the entire squad.”

19-year-old Rasmus Højlund made the difference against Salzburg. The Danish striker benefited from a mistake by Salzburg goalie Philipp Köhn (23′) and shone with speed and coolness in the remarkable second goal (51′). “There was a tremendous conviction within that was emblematic of all of us. That’s what sets him apart, he brings it to the pitch with a naturalness that I’ve rarely seen in a boy like that,” said Ilzer.

After his brace in the ÖFB Cup, Højlund has four competitive goals after three games. “Every goal counts. Of course it was a great feeling to score decisively against such an opponent,” said the young storm star. Ilzer could only underline that: “I am very happy about this super win against Salzburg very early in the season. I’m particularly proud of the way it’s done.” For the first time since 2006, Sturm have won two consecutive home league games against Salzburg. “Thinking big never hurts, but we don’t have any big sayings,” emphasized Ilzer. For the time being, Salzburg is not the hunted, but the hunter. Coach Matthias Jaissle explained: “I have said before that the championship is not a sure-fire success.” (Red.)