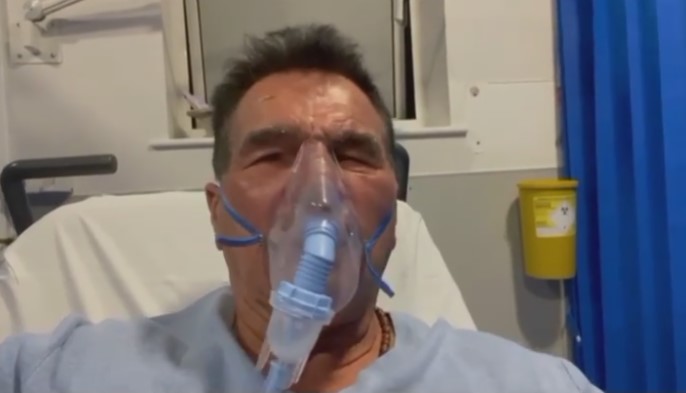 Patrick Doherty is an Irish Traveller who is a former bare-knuckle boxer. He is best known as one of the stars of My Big Fat Gypsy Wedding and Danny Dyer’s Deadliest Men. He won Celebrity Big Brother season 8.

On the evening of Saturday 30, Paddy took to his Instagram to share the news with fans. He filmed a video of himself in a hospital gown with an oxygen mask.

Paddy told his fans: “Back again. Not too good. Just in the lungs, over the Covid.”

He added: “I’ll be all right” and said he’d hopefully be discharged “later today.”

Fans were quick to offer their support. One posted: “Get well Paddy, me and my boy saw you in the soft top Audi yesterday 😳prayers and get well wishes.”

He previously said nurses had been “very worried” about him following his battle with Covid and pneumonia last year.

This is not Paddy’s only brush with a health issue.  Paddy was hospitalised following a heart attack on April 25. At the time he said he was “lucky” to be alive after turning to booze to cope with the death of his mother which he thinks led to his heart attack.

Paddy said: “You know what it is? It’s just all the stress with my brother Martin [McDonagh], and my mother with dementia.

“Maybe I couldn’t handle it. And then I went on the beer, I went to drink. It’s no good.”

Subscribe to our Euro Weekly News alerts to get the latest stories into your inbox!