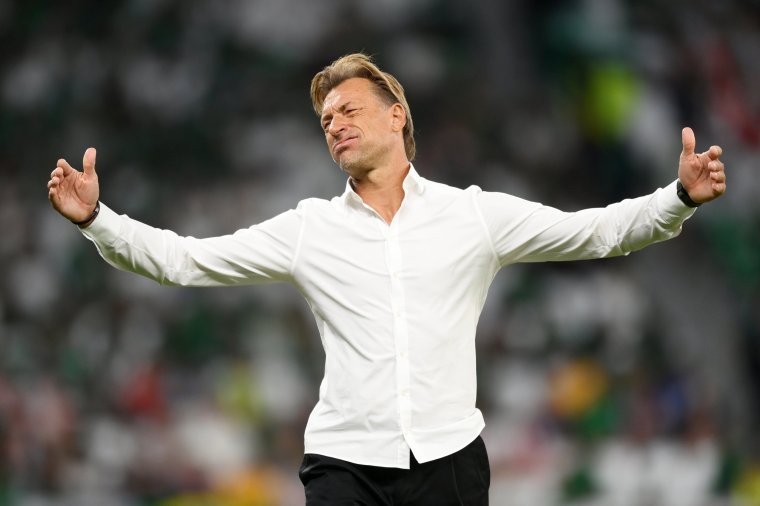 EDUCATION CITY STADIUM – At the Education City Stadium, a lesson in finishing from a master of the art.

82 minutes of an absorbing game dominated by Saudi Arabia had expired when Abdulelah Al Malki took possession of the ball on the edge of the penalty area. His first touch was a heavy one, the ball spinning just out of his orbit and into that of one of the best finishers on the planet.

Even with the albatross of never scoring a World Cup goal around his neck, Robert Lewandowski did not require a second invitation. A touch with his right foot teed up a cushioned left-footed finish and the curse was obliterated, along with the last hope of a Saudi fightback.

Everyone inside a sold-out stadium (which, for once, didn’t have a spare seat in the house) knew the importance of the moment. The Polish bench was vacated, Lewandowski was engulfed by a sea of white shirts and when he emerged, he was on his hands and knees, so choked up by the significance of the moment that he had tears rolling down his cheeks.

“The older I get, the more emotional I get,” Lewandowski reflected afterwards, clutching the player of the match trophy that appears to be the sole preserve of the tournament’s superstars.

At least Lewandowski could make a case that he deserved the honour. It was his brilliant assist that got Poland off the mark, checking Saudi momentum when Piotr Zielinski swept into the net from close range.

There have been some important goals in the first week of the tournament but few, surely, imbued with as much significance as Lewandowski’s.

“My emotions were so strong during the national anthem and I’m not sure why,” he said. “During the game, after I scored, everything I had inside, all those dreams from my early childhood were fulfilled and it was so significant. I was aware it might be my last World Cup and I wanted to make sure that I have scored in one.”

Poland were resolute but there’s a nagging feeling that a team that can call on such talent should be offering more. There’s arguably not a better or more in-form striker at the tournament than Lewandowski and if this goal gets the ball rolling, they can ride that momentum into the later stages if the mood takes them.

The outstanding Saudis have ambitions of their own and deserved more. Mo Kanno was the game’s best player in the first half and for long spells Herve Renard’s side provided zest and elan which Poland strained to contain. But their ruthlessness at both ends of the pitch – turned up to 11 to defeat Argentina – deserted them.

He had a point. A missed penalty was the moment the game turned, Saudi Arabia snatching at a big chance to level the game. Salem Al Dawsari’s first effort was well saved by Wojciech Szczesny but the follow up stop from Mohammed Al Burayk was a thing of beauty, the former Gunner flinging a strong wrist to pop the ball over the crossbar.

It was a role reversal for this excellent Saudi Arabia side, backed by a hefty contingent of mainly young, enthusiastic and raucous supporters who made the short, one hour hop from Qatar’s neighbouring emirate.

Their famous defeat of Argentina came after soaking up almost constant first half pressure from one of the World Cup’s favoured sides, here they had control but no cutting edge. They deserved so much more than being added to the canon of World Cup sides whose performances in this tournament have not been matched by points.

“I’m proud of my team,” Renard said. “We had so many opportunities, but we are still alive so we’ll play to the last second of our World Cup. If it’s next time or another time, we won’t give up.”

They have been one of the surprise packages of this World Cup and their final game against Mexico – who have also travelled in big numbers to Doha – promises to be a riot of colour and drama.

During the school holidays, Dutch girls with a migration background run an extra risk of having to travel with their parents to a country...
Read more
World

Welcome to Thursday’s Early Edition from i.Two years ago he left parliament with thanks for the “delicious English tea”. Yesterday, Volodymyr Zelensky left Westminster...
Read more

During the school holidays, Dutch girls with a migration background run an extra risk of having to travel with their parents to a country...
Read more
World

After teaming up with Just Eat, Greggs customers can add a slice of delicious pizza to their order for free. The...
Read more
EUROPE

After surprise trips to Washington DC, in the United States, at the end of December, and to Paris and London on Wednesday, Volodymyr Zelensky...
Read more
Load more
Facebook
Instagram
LinkedIn
Pinterest
Tumblr
Twitter