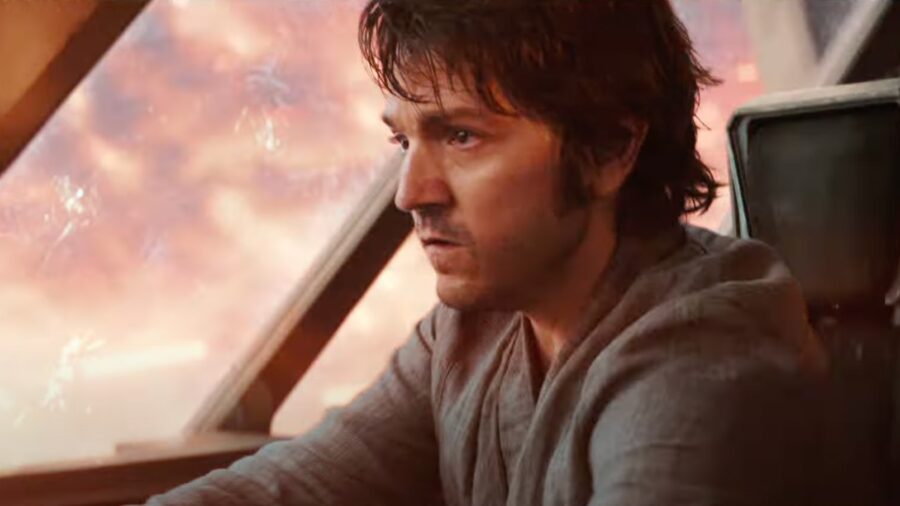 By Michileen Martin
| Published 6 mins ago

The first full trailer for the upcoming Star Wars series Andor is here with good news and bad news. The riveting preview of the next Disney+ show from the universe George Lucas built gives us a closer look at the titular hero as well as other characters from the series, and reveals when the series starts streaming. It also informs us not one, not two, but three episodes will stream on the premiere day. The bad news? Andor won’t be premiering quite as soon as we first heard.

The trailer opens in the green, mountainous region of an unidentified planet, with a Star Destroyer looming overhead. We finally meet Stellan Skarsgård‘s character, who appears to both be a politician in the service of the Empire and the man who recruits Andor into the Rebellion. Other Star Wars characters appearing in the Andor trailer include Forest Whitaker’s Saw Gerrera and Genevieve O’Reilly’s Mon Mothma. You can watch the full trailer below.

Before the end of the new Star Wars trailer, we learn that the first three episodes of Andor are scheduled to stream Wednesday, September 21. Meanwhile, the teaser released at the end of May told fans to expect an August 31 premiere with two episodes. The delay may very well explain why we’re getting three episodes on day one. Likewise, Obi-Wan Kenobi released a couple of days later than expected, and dropped an extra episode on the premiere date as a kind of consolation prize.

One interesting thing of note in the new Star Wars trailer is that Andor seems to be far from just a prequel to 2016’s Rogue One. Both Stellan Skarsgård’s character and Mon Mothma still have access to the Empire’s halls of power in Andor, and that promises to show us a part of the Star Wars mythos we’ve rarely had a chance to see — the transitional period between Palpatine’s ascension to Emperor at the end of Revenge of the Sith and the dissolution of the Galactic Senate in the beginning of A New Hope. In the interim there is a time when the Senate still holds on to the some crumbs of power, and with it some like Mon Mothma are able to seed what becomes the Rebellion. As such, Andor promises to give fans a degree of political intrigue rarely seen in the series or movies.

With three episodes of the new Star Wars series streaming on day one, fans will have access to an entire quarter of the first season of Andor. The first season of the show will feature more episodes than any other Disney+ live-action Star Wars original — a grand total of 12. The rest of the season is expected to roll out one episode per week until the season finale. Lucasfilm is apparently so confident about the reaction to Andor that work on season 2 has already begun.

One familiar face Star Wars fans should not expect to see in the first season of Andor is that of the droid K-2SO. While by the time we meet him in Rogue One, the reprogrammed droid has been with Cassian Andor for a bit of time, Alan Tudyk — who voices the droid — has already confirmed he won’t be there for the first season, as reported by Empire. Here’s hoping his trademark humor will show up in season 2.