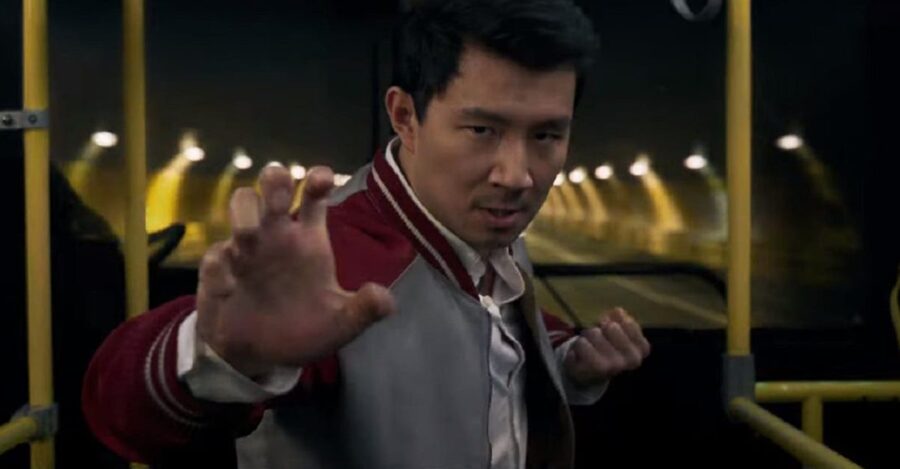 By Britta DeVore
| Published 2 days ago

While he may still need a stunt man for some of his moves, Shang Chi and the Legend of the Ten Rings star Simu Liu has a few tricks up his sleeves. During last week’s San Diego Comic-Con, the Marvel actor made fans lose their minds, while during a panel in the gigantic Hall H, he performed the most *chef’s kiss* of a backflip that we’ve ever seen. First saying that he may not be able to perform the trick (don’t shoot yourself down so easily Simu!) the actor confidently jogs to the side of the stage where he poses, takes a deep breath, and then delivers the most uniform backflip in the history of mankind. As the audience applauds in an uproar, the actor jokes about the grip on his shoes being the reason for his pre-flip nerves. Then, looking at and directly addressing the audience, the actor says “tell everybody what you saw here today,” making sure his backflip would go viral. You can check out the Tweet below.

The moment, which took place during Sunday’s Funko Pop! Talk panel probably brought back some great memories and big emotions for Simu Liu who, back in 2019 was announced to be taking on the role of Shang-Chi in the character’s first movie. While, back then, convention attendees were cheering Liu on for nabbing the role, their excitement was now tripled as he’s officially cut his teeth and joined the family. It was great to see Liu at ComicCon, but it’s unclear as to when we’ll be seeing Shang-Chi on the big screen again.

The day prior to the Funko Pop! talk, Marvel gave their giant overview of what fans can expect from the Phase 5 and Phase 6 rollout. Despite several rumors surrounding a new Shang-Chi film, it didn’t make it to either of the slates. This shouldn’t fully deter fans from expecting to see Simu Liu’s character in any upcoming Marvel projects as it’s possible that he’ll find a place in both Avengers: The Kang Dynasty as well as Avengers: Secret Wars. There’s also a giant possibility of him appearing in both She-Hulk and The Marvels, so don’t count your losses just yet.

Adding on to that, there will definitely be a sequel to the 2021 film as original director, Destin Daniel Cretton has already signed on with Marvel for a year spanning deal. This contract will not only see him collaborating once again with Simu Liu on a Shang-Chi 2, but also points to him centering on offshoots including a spinoff series. But, when that sequel will happen, we just don’t know yet.

Drawing in love from fans and critics alike, Shang-Chi and the Legend of the Ten Rings took the box office by storm just one year ago. The feature centered on Simu Liu’s eponymous character coming to terms with his sordid past after his father Wenwu (Tony Leung) pulls Shang-Chi and his sister Xialing (Meng’er Zhang) into the hunt for a long lost village. The feature also starred the likes of Awkwafina, Fala Chen, Florian Munteanu, Benedict Wong, Michelle Yeoh, Ben Kingsley, and Tony Leung.