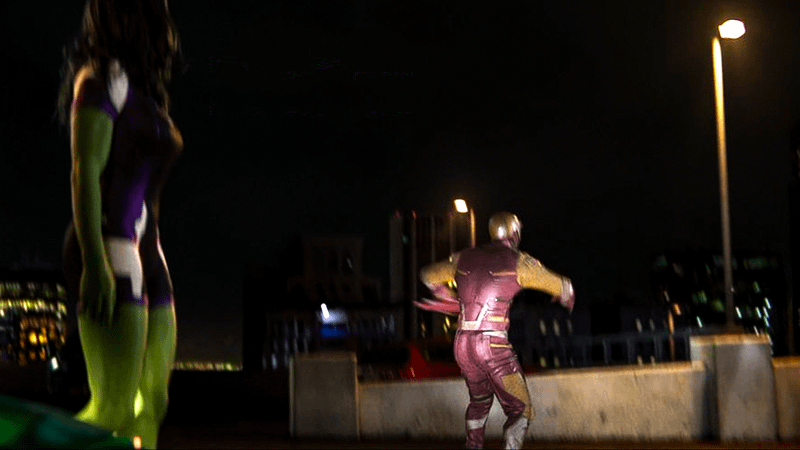 After appearing in three seasons of Netflix’s Daredevil, Charlie Cox made a surprise comeback in last year’s Spider-Man: No Way Home in a brief yet significant role to help Tom Holland’s Peter Parker with his messy legal battle. Since then, fans have been speculating on which Marvel project The Devil of Hell’s Kitchen appears next.

At this year’s San Diego Comic-Con, it was ultimately confirmed that Daredevil would appear in She-Hulk: Attorney At Law. Still, it is unknown how Matt Murdock will fit into this series’ nine-episode run as She-Hulk makes her long-awaited MCU debut as a leading heroine.

Now, the show’s lead star has teased what’s in store for Cox’s Disney+ debut in the MCU.

At the tail-end of the trailer, Daredevil appeared alongside Jennifer Walters on a rooftop, with the character wearing an upgraded costume.

Speaking with Deadline, Maslany teased that fans will be “really happy” about Cox’s Daredevil return, teasing that he’s a “really amazing actor:”

Interviewer: “Charlie Cox is coming to play as Daredevil. What can you tease about that?”

Maslany: “I don’t want to say anything… I just want to say that I think the fans will be really happy. He’s amazing. He’s a really amazing actor.”

In an interview with MTV News (via She-Hulk Daily), Maslany was asked first if it took convincing on her part to say yes to Marvel. The MCU newcomer revealed that the script of the show’s pilot convinced her to come aboard, saying that the “writing was so weird and funny:”

MTV News: To dive into this, did it take convincing or what?

Maslany: “I mean, for me, I kind of avoided doing big things because I’m afraid of that size of [that] world, but when I read the pilot for the audition, I was like, ‘This is so funny, [it’s] so different than anything I’ve read.’ And like, if this weren’t Marvel, I would want to do it. Do you know what I mean? It was just the characters, and the writing was so weird and funny.

When asked if Jennifer Walters and Matt Murdock get along in the series, Maslany openly claimed that the pair are “best friends:”

MTV: “Matt Murdock and you? Do you guys get along?”

Tatiana Maslany’s tease that Jennifer Walters and Matt Murdock are best friends in the MCU could simply be a misdirection at first, especially considering the pair’s history from Marvel Comics. In the comics, Walters and Murdock were actually adversaries in court, with Steve Rogers being at the center of it.

It’s possible that a similar narrative trajectory will happen in the MCU, with both lawyers-turned-heroes being at odds first before eventually teaming up against a formidable threat. This dynamic allows the friendship between Walters and Murdock to flourish, setting up a partnership that could prove beneficial in the long run.

Given that She-Hulk is a “half-hour legal comedy,” there’s a chance that Murdock’s comedic side could also be showcased in the series. Not only that, but it’s also likely that fans will finally see the MCU’s Daredevil in action in the series due to the fact that he is suited up and ready to fight crime in the trailer.

All in all, Murdock’s appearance in the series would give a breath of fresh air to the character before diving into his darker roots in the already-confirmed Daredevil: Born Again series, which is still nearly two years from its release.

She-Hulk: Attorney at Law is set to premiere on Disney+ on Wednesday, August 17.