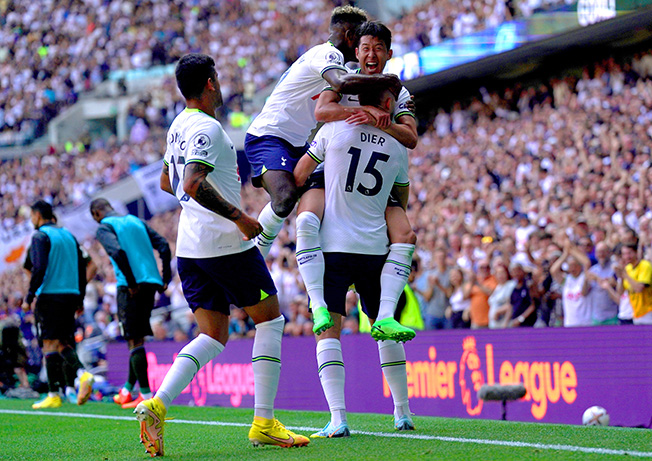 Tottenham Hotspur underlined their credentials as a team capable of a Premier League title challenge with a confident 4-1 defeat of Southampton to get their campaign up and running on Saturday.

The hosts fell behind to a James Ward-Prowse volley in the 12th minute but dominated throughout with goals by Ryan Sessegnon, Eric Dier and Dejan Kulusevski sealing the win.
Southampton’s lead lasted only nine minutes before Sessegnon powered a header past Southampton’s Premier League debutant keeper Gavin Bazunu from Kulusevski’s cross.
Dier glanced in Son Heung-min’s cross with a stooping header in the 31st minute to put Tottenham ahead, and the hosts should have been out of sight before the interval.

Mohammed Salisu clumsily turned Emerson Royal’s cross into his own net in the 61st minute, and two minutes later Royal set up the impressive Kulusevski to guide an exquisite finish beyond Bazunu whose saves kept the score respectable.

It was quite a statement by Tottenham, who did not even need the usual goal contributions of last season’s Premier League Golden Boot winner Son or Harry Kane – both of whom had several chances to open their tallies for the season.

Tottenham ended the match in cruise control and manager Antonio Conte gave debuts to new signings Ivan Perisic and Yves Bissouma as substitutes in the second half.
Elsewhere, Newcastle United made a comfortable start to the new season thanks to goals from Fabian Schar and Callum Wilson in a 2-0 win over Nottingham Forest, giving the visitors an unhappy return to the Premier League after a 23-year absence.

Newcastle took the lead through the unlikeliest of goalscorers when centre-back Schar let fly from the edge of the penalty area just before the hour mark.
With 12 minutes remaining, Forest’s Brandon Williams gave the ball away and Allan Saint-Maximin rolled it to Joelinton down the left-hand side. The Brazilian crossed for Wilson, who looped the ball over goalkeeper Dean Henderson with a smart finish.

Forest had a sniff of goal towards the end of the opening period through new signing Jesse Lingard but were handed a stern reality check on their top-flight return and did not register a shot on target.

Bournemouth meanwhile made a winning return to the Premier League by beating Aston Villa 2-0 at home following goals from midfielder Jefferson Lerma and striker Kieffer Moore.
An own goal by defender Rayan Ait-Nouri gave Leeds United a 2-1 win over Wolverhampton Wanderers in their opening Premier League game of the season at Elland Road.

The winning goal was initially assigned to debuting winger Brenden Aaronson, but closer checks showed it was Wolves’ Ait-Nouri who bundled striker Patrick Bamford’s cross over the line in the 74th minute.