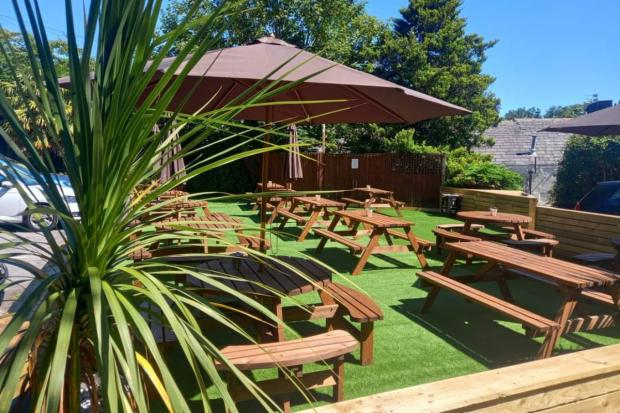 The Brewhouse Pub has been renamed The Cheetham Arms by Craig Pinnion, who took it over in February.

The inside and the outside of the pub on Blackburn Road, Egerton, has been revamped.

And the new look pub has had its food hygiene rating go up to five.

Craig has invested £34,000 into the pub, modernising it whilst also keeping its character.

The front of the building has had £7,000 invested into the new signage and all the lighting has been updated.

The kitchen has had a £10,000 renovation with new flooring, new stainless steel counters and the whole kitchen has been decorated with damage replastered.

And £16,000 has gone into the beer garden at the back of the pub which has already been well received by customers.

The previous beer garden was an overgrown yard with trees but now it is a really lovely area for customers.

Craig said they have managed to keep the character of the building.

He said: “I took over the business back in February and we took over the kitchen which had structural issues with wooden shelves which weren’t right.

“The kitchen was dated with structural issues, with the use of wooden materials not stainless steel.

“We worked with the brewery and highlighted the issues but during this time Bolton Council came out and scored us a two, we expected it to be a low score because of the issues at the time.

“We tried to work safely to cook in the kitchen and the food hygiene was good, we seperated everything like you should do and our chefs are trained when it comes to food.

“The food was safe so we could continue trading after a score of two.

“But the problem with our first inspection wasn’t the hygiene it was the health and safety due to structural issues.

“We also had an outhouse building at the back of the building which wasn’t ideal for the storage of our fridges and freezers, so by moving the store from the outbuilding we have created a safe storage space inline with Bolton Councils standards.

“We have now refurbished, we have moved everything inside for better cleanliness and safety for our chefs and we have two new commercial fridges.

“We feel fantastic now having a five star rating.

“I have invested so much to get the business back up and running, we have even redone the beer garden so we have a really nice outside space now.

“The five was really important as it gives confidence to customers that we are producing good food but also safe food.

“We offer pub food but everything is homemade and comes fresh, so it’s the basics done well.

“Locals who came before I took over in February still come and new customers are also coming, its all been really well recieved because they are seeing the work being done and we are trying to make it as nice as possible.”

Craig said the name change was also needed as the pub is no longer a brewhouse.

He said: “The name was changed to put our own stamp on the business but also to go back to it’s original name as we no longer have a brewery.”