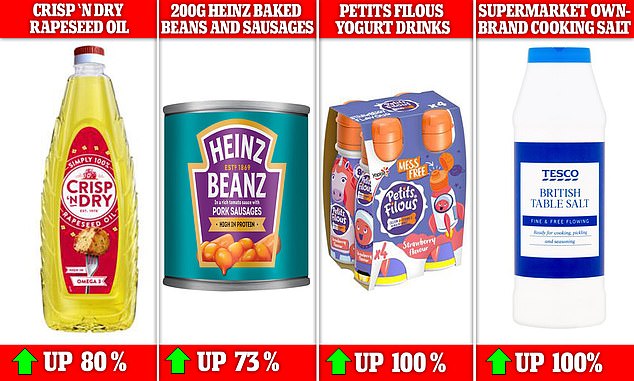 Revealed: The shopping trolley essentials that have DOUBLED in one year as cost-of-living crisis continues to hit British families

By Daniel Jones Consumer Affairs Editor For The Mail On Sunday

Grocery prices are going up a record ten per cent compared with last year – but some items have doubled in price, The Mail on Sunday can reveal.

Heinz came under scrutiny last month for increasing favourites such as beans and soup by as much as 40 per cent, but these were thought to be extreme examples.

This latest research for the MoS by Assosia, which monitors prices at the Big Four supermarkets, shows more than 120 of the most popular branded and own-label products are up by at least that amount compared with a year ago.

Petits Filous yogurt drinks and supermarket own-brand cooking salt are both up 100 per cent, and Crisp ’N Dry rapeseed oil is up 80 per cent. 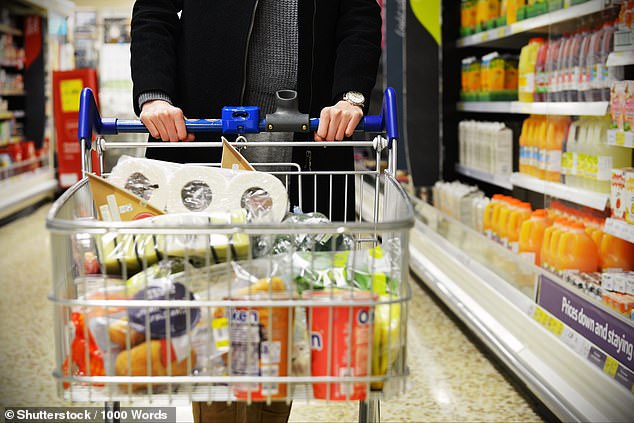 Price rises on own-label staples are traditionally limited by supermarkets, as they battle to outdo rivals on value

A 200g can of Heinz baked beans and sausages is up 73 per cent from 70p to £1.21. The increase of 51p is more than what shoppers paid for the product a couple of years ago.

Price rises on own-label staples are traditionally limited by supermarkets, as they battle to outdo rivals on value. But of the biggest increases in percentage terms, almost half were own-label.

Experts point out this is partly because they cost much less in the first place, so the same rise in pence equates to a bigger percentage rise.

Own-label pasta features prominently among items that have risen by more than 40 per cent – various types and sizes making up 16 of the 121 items. Typically, 500g packs, such as spaghetti and penne, are up 30p – from about 53p to 83p, or 57 per cent. Brands such as Napolina are also up by a similar amount of pence.

Helen Morrissey, analyst at asset management company Hargreaves Lansdown, said: ‘Grocery prices have grown but even this hides the even murkier truth that the cost of some essential items has grown at a much higher rate than others.

‘Cooking oil, pasta, milk and margarine have risen by shocking amounts and – while you might not notice a few pence or a pound here and there – over the cost of a weekly shop it is really mounting up.

‘We are seeing more people looking to economise by going to cheaper supermarkets and switching to own-brands. While they may be cheaper, the costs of these are rising too.

‘Those on low incomes will be particularly struggling right now.’