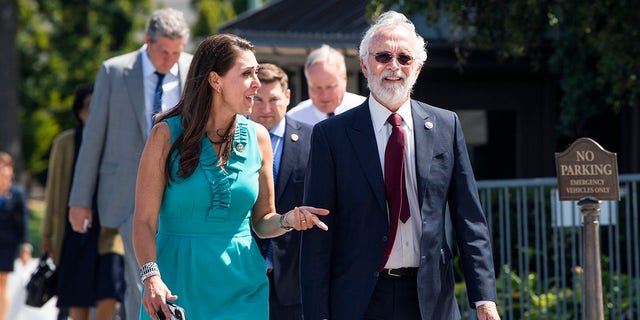 EXCLUSIVE: Two Washington GOP House candidates, both of whom are seeking to represent two different Congressional districts in the state, will face off in their primary elections next week against incumbent Republicans who voted to impeach former President Donald Trump last year, insisting that those impeachment votes will move voters to the polls.

In recent interviews with Fox News Digital, Loren Culp, a former Washington police chief who is challenging Newhouse, and Joe Kent, a retired Army Special Forces chief warrant officer who is challenging Beutler, insisted that the votes to impeach Trump by the two GOP House members could have an impact on Tuesday’s election.

Both Beutler, who has served in Congress since 2011, and Newhouse, first elected to Congress in 2014, voted to impeach Trump after the Jan. 6 Capitol protests following the 2020 presidential election. In addition, the two Republicans who have faced backlash over the decision from voters in their districts also voted in favor of establishing an independent commission to investigate the Jan. 6 attack on the Capitol.

“Having the endorsement of President Trump is huge,” said Culp, who ran for governor of Washington in 2020. “All of my competitors ran around the country to Trump events and some of them even paid to get into fundraising events at Mar a Lago, trying to rub elbows with people in Trump’s orbit and meet President Trump to get his endorsement.”

“I did exactly the opposite,” he added. “I told my campaign, I said, ‘President Trump is not going to endorse someone without looking at everybody. He’s a smart man and he will make the right decision. He’ll see what I’ve done, he’ll see what we did in 2020…”

Describing the moment he found out he had received Trump’s endorsement in the race, Culp said, “I did not know he was going to call me.”

“My wife and I were sitting having a cup of coffee talking about our grandkids and my phone rang,” Culp recalled. “I was very surprised. … and he said exactly what I knew he would have done. He said, ‘I looked at all the candidates, checked the background. I’ve seen what they’ve done, I see what you did, and I’m backing to you 100%.'”

Culp said he has gathered a lot from voters in the state and throughout the district over how they feel about Newhouse’s vote to impeach Trump.

“They’re not happy that Newhouse voted to impeach President Trump and then doubled down and voted for the January 6th commission, which is nothing but political theater for Nancy Pelosi to demonize Trump and conservatives,” Culp said.

Culp, who is also endorsed by former Florida Attorney General Pam Bondi and Colorado Republican Rep. Lauren Boebert, took aim at Newhouse on a variety of fronts, including his willingness to support Democrats’ “out-of-control spending” measures.

“My opponent, Dan Newhouse, has voted for all of the big spending bills that have come along,” Culp said, vowing to vote in accordance with the constitution and for things that will economically benefit Americans.

Echoing Culp, Kent said Trump’s endorsement, which he considers to be the “most powerful endorsement in the country” and the “gold standard” of approval for America First candidates has “been huge” for his campaign.

“He’s definitely the leader of the America First Movement,” Kent said of Trump. “But the other reason why the Trump endorsement was so critical in our race is because of the jungle primary here in Washington State. In order to be effective against a 12-year incumbent, we had to really rally around one candidate.”

Taking aim at Beutler, Kent, a Gold Star husband whose wife was killed in 2019 while conducting special operations against ISIS in Syria, said “people are still furious” that she voted to impeach Trump.

“Really what that vote did is it exposed her record, the totality of her record,” Kent said. “I say this all the time… I challenge Republicans to show me the one issue where Jamie has stood up for Republican values or for the district. She’s very much, I would just say, controlled opposition for the left. … The vote for impeachment really exposed all of her true colors.”

“Her impeachment vote finally put her in play,” Kent said, claiming that Beutler has never been challenged in a similar fashion by another Republican.

Regarding the overall response to their campaigns, both Culp and Kent said they have received overwhelming support from voters in the districts they hope to represent at the national level.

Culp, who made headlines in 2018 during his tenure as Republic’s police chief when he vowed to defend voters’ Second Amendment right against newly implemented gun regulations, said voters are “very pissed off.”

“They’re mad at Newhouse, they’re mad at Biden, they don’t like the way our country’s headed,” he said. “They’re sick and tired of the prices of everything going up. You see what Biden’s done with our energy policy and we’re definitely not on the right track. Most of the people that I talk to understand what’s going on.”

“Biden is totally puppet of our enemies, including China,” Culp added. “If you just look at the evidence, he’s trying to destroy America. That’s that’s what people are saying to me. That’s what they’re seeing, that’s what I see.”

Kent, who has also received endorsements from former acting Secretary of Defense Christopher Miller and Florida Rep. Matt Gaetz, said he is “under a lot of fire” as election day approaches.

“We’ve have $3.7 million in dark money getting dropped on the race right now,” Kent said. “But I think that is almost better than polling because they wouldn’t be spending the money on me if they didn’t view me as a threat.”

“I’m feeling a lot of grassroots support here,” he added. “Our town halls are bringing out quite a few people every single night. We knocked on over 120,000 doors. So, I mean, we feel a lot of really good momentum.”

The Washington primary elections will take place on August 2. Unlike several other states, Washington has a top-two primary election and all candidates in the race appear on the same ballot. The two individuals who receive the most votes in each election, regardless of party affiliation, will move on to the general election.

Fox News did not receive responses from the campaigns of Beutler or Newhouse.