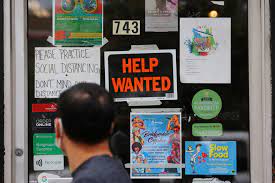 US job growth unexpectedly accelerated in July, lifting the level of employment above its pre-pandemic level and pouring cold water on fears the economy was in recession.

“If the US economy is in a recession, no one seems to have told employers,” said Sarah House, a senior economist at Wells Fargo in Charlotte, North Carolina. “We suspect this data will give the Fed the confidence it needs to push ahead aggressively with its fight against inflation.”

Nonfarm payrolls increased by 528,000 jobs last month, the largest gain since February, the survey of establishments showed. Data for June was revised higher to show 398,000 jobs created instead of the previously reported 372,000. July marked the 19th straight month of payrolls expansion, and blew off economists’ expectations for a gain of only 250,000 jobs.

The labour market has now recouped all the jobs lost during the Covid-19 pandemic, though government employment remains about 597,000 jobs in the hole. Overall employment is now 32,000 jobs higher than in February 2020.

It took just under 2-1/2 years to recover all the jobs compared to at least six years after the 2007-2009 Great Recession.

The Fed last week raised its policy rate by three-quarters of a percentage point and officials have pledged more hikes are coming as the US central bank tries to rein in inflation. Annual consumer prices are rising at their fastest pace in four decades. Since March, the Fed has lifted its benchmark overnight interest rate from near zero to a range of 2.25 per cent to 2.50 per cent.

“The Fed is looking increasingly likely to be able to maintain its current trajectory without constantly looking over its shoulder, making it the envy of world economies who are all enduring the same knife-edge balancing act at the moment,” said James Bentley, a company director at Financial Markets Online.

US gross domestic product declined in the first and second quarters, meeting the standard definition of a recession. The economy’s 1.3 per cent contraction in the first half of the year was mostly because of big swings in inventories and the trade deficit tied to snarled global supply chains.

The National Bureau of Economic Research, the official arbiter of recessions in the United States, defines a recession as “a significant decline in economic activity spread across the economy, lasting more than a few months, normally visible in production, employment, real income, and other indicators.”

But even with July’s robust jobs gains, some cracks are forming in the labor market. Businesses in the interest-rate-sensitive housing, finance, technology and retail sectors are laying off workers. Still, with 10.7 million job openings at the end of June and 1.8 openings for every unemployed person, a sharp deceleration in payrolls growth is unlikely this year.

Stocks on Wall Street were trading lower. The dollar rallied against a basket of currencies. US Treasury prices fell.

The labour force participation rate, or the proportion of working-age Americans who have a job or are looking for one, edged down to 62.1 per cent from 62.2 per cent in June. That mostly reflected a drop in participation by teenagers.

The prime-age population’s participation rate ticked up to 82.4 per cent from 82.3 per cent in June. The employment-population ratio for this cohort rebounded to 80 per cent, consistent with full employment.

The number of people working part-time for economic reasons increased by 303,000 to 3.9 million after plunging to more than a 20-year low in June.

But household employment rebounded by 179,000 jobs after falling 315,000 in June, and the number of people experiencing long spells of unemployment dropped 269,000 to 1.1 million, the lowest level since April 2020. These long-term unemployed accounted for 18.9 per cent of the 5.7 million unemployed in July.

With the labour market tightening further, average hourly earnings increased 0.5 per cent after rising 0.4 per cent in June. That left the year-on-year increase in wages at 5.2 per cent. The workweek was unchanged at 34.6 hours.

Wage gains were mostly driven by industries in the services sector, including leisure and hospitality, financial, and professional and business services. A proxy for take-home pay surged 1.2 per cent on a month-on-month basis, which bodes well for consumer spending amid declining gasoline prices.

“The risk to wage growth appears to be on the upside in the near term given the persistent strength of the labor market and the lack of a rebound in the labor supply,” said Lydia Boussour, lead US economist at Oxford Economics in New York.

After becoming a perennial contender early in Mike Zimmer‘s stay, the wheels fell off for the Vikings over the coach’s final two seasons. The crusty...
Read more
business

It’s not every day that you get the chance to see the behind-the-scenes of how farm-fresh veggies are grown or how a well-known brand...
Read more
Load more
Facebook
Instagram
LinkedIn
Pinterest
Tumblr
Twitter