Will Manchin and Sinema tank Biden’s agenda AGAIN? Moderate Democrats appear at odds over $740B deal 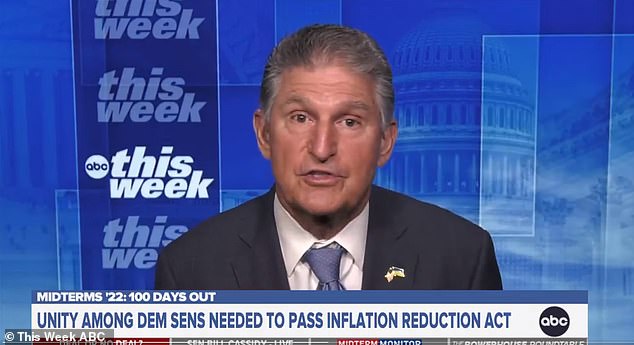 West Virginia Democratic Senator Joe Manchin said his fellow moderate, Senator Kyrsten Sinema, has ‘an awful lot’ included in the $740 billion package during an interview on ABC News’ This Week.

Someone close to Sinema, however, told NBC News that the legislation ‘includes a tax provision she has been clear and consistent with opposing.’

They also said the Arizona Democrat is ‘not upset’ she was not included in the recent negotiations, despite reports that suggest she was blindsided when it was unveiled in the Senate last week.

Manchin and Sinema were responsible for tanking several of Biden’s legislative attempts, including their party’s $1.75 trillion progressive-backed Build Back Better agenda, as well as efforts to pass voting rights legislation and to codify abortion rights.

Talks on passing a budget bill via reconciliation – which would allow it to pass via a simple majority rather than the normal 60-vote threshold – were thought to be dead in the water until Manchin stunned even his fellow Democrats last week when he unveiled a deal with Senate Majority Leader Chuck Schumer.

Manchin had said earlier this month that he opposes further spending to address climate change in light of soaring inflation. But the new bill includes $300 billion for reducing the budget deficit plus funding that ‘lowers energy costs, increases cleaner production, and reduces carbon emissions by roughly 40 percent by 2030.’

It also includes measures to lower the cost of healthcare for millions of Americans.

Speaking on all five major networks’ Sunday shows, the centrist argued that the bill would help reduce the burden of high costs.

But with Democrats’ razor-thin majority in the Senate, they need all 50 members to vote in lock-step for the bill to pass with Vice President Kamala Harris as the tie-breaking vote.

And now all eyes are on Sinema, who has not yet said whether she will support the bill.

Asked about his colleague on ABC, Manchin replied confidently: ‘Senator Sinema is my dear friend. I have all the respect for her, she’s extremely bright and works very, very hard.’

‘She has an awful lot in this piece of legislation, the way it’s been designed as far as the reduction of Medicare…She’s very involved in that and I appreciate that,’ Manchin said.

He told CNN’s State of the Union that Sinema had ‘formed quite a bit of it and worked on it very hard.’

However, he explained that she was not more directly involved in the talks because he had serious doubts about the package’s viability. 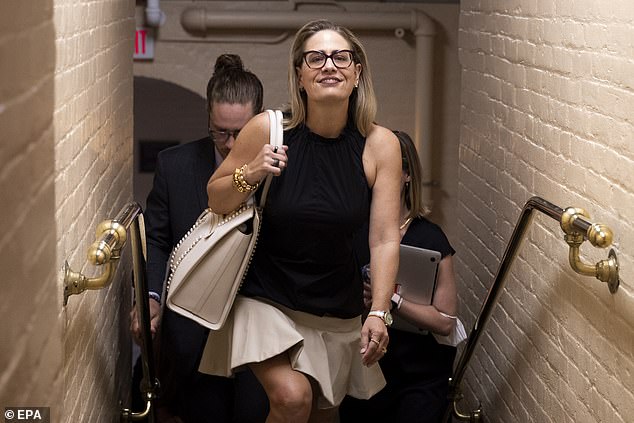 It’s unclear if his fellow moderate senator, Kyrsten Sinema, will be supportive of the legislation. She was notably excluded from the negotiations

‘The reason people weren’t brought into this, I didn’t think it would come to fruition. I didn’t want to disappoint people again,’ he said.

As to whether she will support the legislation, Manchin said that was ‘her decision, and I respect that.’

He said on ABC, ‘Also, basically, when she said taxes, we’re not going to raise taxes, I agree with that, and I made sure we scrubbed this. There’s not a tax increase.’

But the bill’s inclusion of a carried interest tax could be a breaking point for Sinema.

The provision, which estimates say could bring in $14 billion in tax revenue, is the specific measure highlighted by NBC on Sunday that could cause her to oppose the deal.

The carried interest tax loophole allows hedge fund managers and private equity investors to pay a tax rate of just 20 percent on incomes coming from gains in a certain investment. It’s nearly half the top tax bracket for wealthy Americans – which is 37 percent. 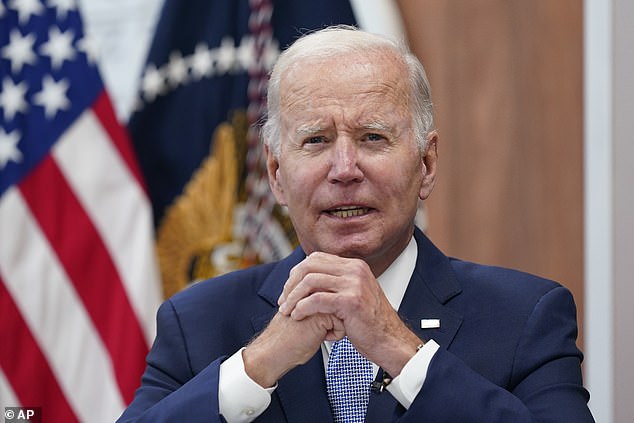 And while Sinema was previously in favor of the 15 percent minimum corporate tax included in the bill, it’s not clear if her opinion has changed in the months since she first stated that position.

With Democrats’ thin majority in the Senate, Sinema and Manchin have had outsized influence on the party’s agenda in Washington. That’s including multiple private visits to the White House, with Biden and his senior aides attempting to court the senators’ support.

But she was apparently excluded from this latest round of negotiations, which could be Democrats’ last chance to deliver reform to voters before the November midterm elections.

Sinema only found out about the deal when it was announced publicly, a source familiar told the Wall Street Journal.

Its announcement reportedly prompted her to ask ‘What’s going on?’ on the Senate floor last week.

She was also absent from Schumer’s meeting with Democrats to discuss the deal on Thursday.